Today is the 438th anniversary of the Gregorian Calendar.  Introduced in 1582 by Pope Gregory XIII, it aimed to fix the slow drift in the seasons that was experienced under the older Julian calendar.  The Julian Calendar was introduced by Julius Caesar, and had worked pretty well - its 3 years of 265 days and a fourth of 366 is very close to our current calendar (not bad for 2000 year old science).  But 365.25 is not equal to the actual solar year of 365.24219.  Over the course of 1600 years the solstices had drifed by around 10 days.  The new calendar was designed to fix that.

It was immediately caught up in the wars of the Reformation.  Protestants refused to adopt it because of its "Papist" origin, but eventually the desire for scientific accuracy in the dates of the seasons won out.  In British possessions the Calendar Act of 1750 finally moved the dates almost 200 years after Pope Gregory.  It's actually a myth that April Fool's Day was a day to mock people still using the old calendar.  It's another myth that riots broke out on its adoption, although it gave us this nifty painting by William Hogarth: "Give us our eleven days!". 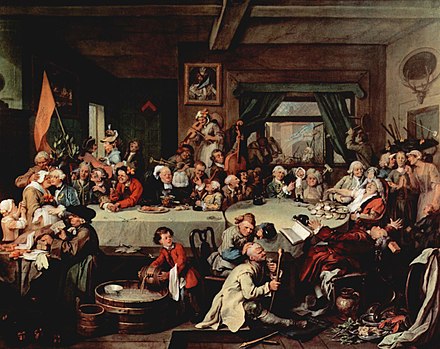 That's a long introduction to this morning's music which is said to date back to a different Pope Gregory - the first one.  It may be somewhat later than that, depending on on you classify early liturgical chant styles.  But since the difference is that later chants included newer verses in the liturgy (rather than a different style of chanting), I take a broader view and see the history going all the way back to Gregory I.

In the early Roman church the service was sung, not spoken.  Well, chanted.  This is much older than 1582, but a nice start to a Sunday.

Great post! I have several CDs of Gregorian chant that I enjoy at Christmas time. I have a hard time picking out the words, there is another version of this on YouTube with the Latin and direct English translation. "Day of Wrath" may be an appropriate chant for these days, but I guess this was for mourning a death.
Wonderful to hear though it may not be understood. Well, like so many things today.