So the Democrats have had their shot, and it looks like a wet firecracker.  This is the high water mark for Joe Biden, and it will all be down hill from today.  Quite frankly things look grim for Biden/Harris.  So the question isn't whether Slow Joe will lose, but by how much.  Here's my prediction: 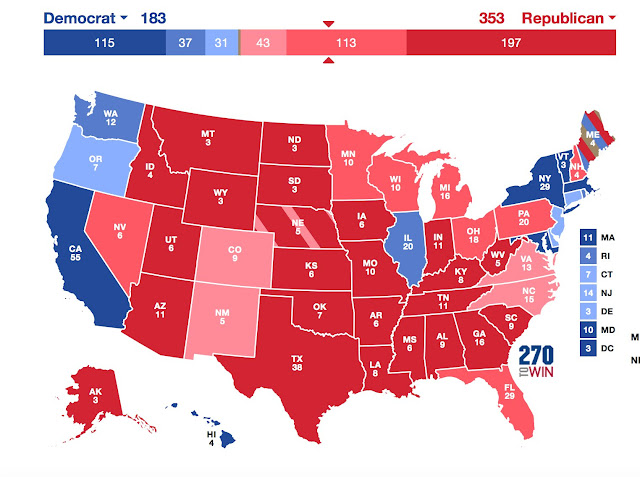 This map has the wrong counts for some of the State electoral votes; both Trump and Biden will get an additional EV that the map didn't correctly count (there are 538 electoral votes).

Here's how I arrived at this result: I started with the State-by-State vote percentages that Clinton and Trump got.  Then I applied the following adjustments:

So adding 4% to Trump (and subtracting 4% from Biden; this is a zero sum game) gives us the map I showed.  Actually, New Mexico is a tie; I awarded it to Trump because like I said I think the incumbency advantage is probably more than +1%.
What's interesting is that you have to add a lot more to get the vote totals to change much from here - another 1% doesn't change anything at all, 2% only swings 10 electoral votes (embarrassingly for Biden, 3 of them would be from his home State of Delaware), and it's only when you add an additional 3% that you start swinging some serious EVs like New Jersey, Illinois, and Washington.  I just don't believe that Trump will increase his vote percent from 47% to 53%.  It's possible - Joe is a terrible candidate - but this is landslide territory and would mean serious GOP pickups in Congress as well.  I'm not seeing those vibes.
So there you have it.  I may be wrong, but at least I show my work.
Posted by Borepatch

Not to fret; the Democrats have already rejected the outcome of the upcoming election. Something about the Russians stealing the mailboxes and planning to dust all the polling places with polonium, plus the vaccine that will be mandatory for voting contains an RFID tracking tag and has severe side effects in People of Color and of Gender.
(I need some better tinfoil; there's gotta be a better explanation than what I just wrote.)

Who is counting all the mail-in ballots? Voting is nice and all, but counting votes is how you win elections.

ASM826, it's the same people who counted them last time. There was plenty of fraud then, too.

+10 for Biden from vote fraud. I am with ASM826 on this one. It may be the same people but they are way more motivated and not overconfident. Don't forget it's not just the vote counters, its the vote deliverers. USPS employees are members of a Democrat union which has formally endorsed Biden. I am expecting much mail disappearance from areas that are predictably conservative. Plus there will be the usual vote manufacturing, dead voters, etc.

Everyone's kind of holding their breath, waiting to see what they're going to do with poor old Joe. Joe throws a rod at some point, and gets replaced with fill in the crazy, scary blank.

A couple speculations I've seen about:

1) This is all going through the motions, no one's expecting to have elections. Some emergency comes up in September or October.

2) The D.s are setting up to throw the election into doubt.

It doesn't matter if Trump wins by a whisker or by a country mile, they'll scream ILLEGITIMATE and go insane for the next four years too.

My only advice besides work and pray? If - please Hashem! - Trump gets reelected, we keep the Senate, and retake the House, the GOP better get the message and move forward at flank speed.

MHO: Even if Trump gets in with the parallel wins as above, we're only delaying the inevitable spiciness.

I am still waiting for a big surprise as suddenly the Donks find that Biden isn't viable mentally and are shocked and toss in some new candidate who has star appeal and still a very favorable rating amongst most people.

So I am trying to follow what Oprah is doing with her empire, and she seems to be contracting it.

Then there's the tall former first lady, who had a very good (in comparison) showing during the convention.

So Trump's campaign is all about the issues around Biden and Harris. He's spent a metric boatload of money already. Does he and his campaign staff have time to change the campaign if skullduggery occurs?

As to mail-in votes, it seems about every other day we hear about main-in ballots being sent incorrectly, or multiple times, or just completely falsely. And this is even before the big election, only primaries and such.

I'm pretty sure that Trump will win, but I doubt he'll win by as much as you predict - the Democrats have working with judges, officials, and the media too long to not steal a good chunk of his lead... and as mentioned, they plan to contest it anyway.

As to Hildabeast statement that you can win by 2 million votes but lose the elections.
There are 3,142 counties in the United States
2,659 voted for Trump
484 voted for Clinton
Trump won by 2,658 counties - We, the small "deplorable" people overwhelmed the Dem Big Cities. It will happen again and they will lose their collective minds. It going to get ugly.

As Stalin said it's not about who votes, it's about who counts the votes.

And the USPS do I trust them?No.
For example in the 2000 election W won florida by about 500 votes, he won my precinct by over 800, under that scenario if my precinct had not been counted Gore would have been elected
I can see the USPS union types "accidentally" misplacing the ballot s from my Zip code

I haven't done the state-by-state breakdowns or napkin math you have at this point, but my SWAG is Trump pulls 40 states, which is close enough to your prognostication to be within spittin' distance.

And while you're going by vote tallies, not polls, let us not forget, the overwhelming majority of polls last time around were off by double digits.

Because while even the best of them only looked at likely voters, let us recall the OrangeMan's victory was achieved by reaching the unlikely voters.

Chimpanzees throwing darts could do no worse job of predicting the 2020 outcome than the actual track record of official pundits.

It will absolutely be interesting to watch.
Just hopefully not in a Chinese curse sort of way.

Good call. And let's not forget the POC demographic -- what was Rasmussen at after the RNC, around 26-30%? Something like that. Dem disaster.

As Insty would say, DON'T GET COCKY.

Trump has been kicking ass and getting shit done lately. While the democrats are so weak and desperate that they actually have a man with dementia running for president and are enabling rioting and kneeling to anarchists.