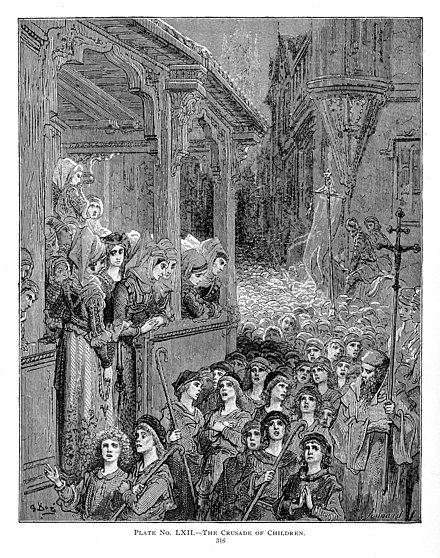 Everyone has heard about the Great Crusade, preached by Pope Urban in 1095.  It had captured the Holy Land from the surprised saracen inhabitants and had set up crusader kingdoms there.  But it started going down hill pretty quickly, with Saladin re-taking Jerusalem in 1186. Christendom felt a sense of siege, and people wanted to do something about it.

Enter Nicholas of Cologne, a charismatic shepherd from Germany.  in 1212, he preached a "Children's Crusade" where God would cause the sea to part before them and muslims would peacefully convert to Christianity.  The chronicles say that thousands of young people followed him.  The sea didn't part before them, but many ships offered them passage.  Of course, it was passage to the slave markets of Tunisia.  None made it to the Holy Land.

It was a disaster, one bred of over confidence and a, well, childishness sense that the world was other than it actually was.

We're seeing a Children's Crusade in Virginia unfolding before our eyes.  The Virginia Citizen's Defense League is preaching that the sea of Antifa blocking their path will part by some sort of miracle, and that the Democratic state assembly will see the light and be peacefully converted to MUH SECOND AMENDMENT.  That really looks like the plan.

Instead, the world is the way that the world is, rather than the way that the VCDL would like it to be.  How much blood will be shed is unclear, as is how many agents provocateur will bring Nazi and Confederate flags.  The police may or may not herd the VCDL crowd through the Antifa throng as occurred in Charlottesville and at the Trump rally in Chicago.  The Media may not go out of their way to show them in the worst possible light, and might not broadcast this from coast to coast for days on end.

Maybe.  But the VCDL is putting a lot of trust in their opponents to act with restraint.  It's touching.  Kind of sweet, really.  Just like the Children's Crusade.

Of course, the rest of us will suffer collateral damage.  If it blows up like it looks like it will, other States will be emboldened to take similar draconian measures.  Trust in the Supreme Court seems equally child like - as the saying goes, the Supreme Court reads the election returns.  If the great undecided middle buys into the propaganda that will follow the Children's Crusade ("ZOMG!  Nazis and White Supremacists!") then gun rights will take a bullet in Maryland, the Northeast, Florida, and other places.

Thanks for thinking this through, guys.  Real mature of you.
Posted by Borepatch

The problem, as I see it, is that there IS NO good outcome at this point, no matter what IS or what IS NOT done.

because it all about you. damn I thought you were on of us. may your chains rest lightly upon you...

riverrider, if "being one of you" is being stupid, then no thanks. Because that's what it looks like VCDL is being, and they look like they're going to spark draconian gun control in a bunch of states by being stupid asshats.

There are ways to be smart, where you set things up to play to your strengths and your opponent's weakness. I'm all in on that. I posted about how to be smart and win, rather than being dumb and lose.