The Gun Control House of Mirrors 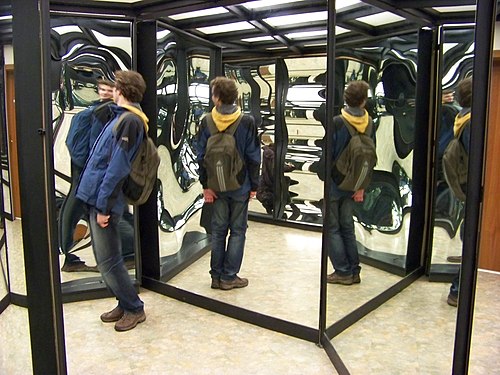 The House Of Mirrors is a staple of county fairs across the land.  It's a maze with mirrors for walls - the fun is in the confusion caused to the patrons as they try to get through to the end.  Sometimes mirrors are convex or concave to distort the reflection, sometimes a mirror is replaced by normal glass to add to the confusion.

Interestingly, the concept first appeared in The Phantom Of The Opera in 1911, although that scene got cut in Andrew Lloyd Webber's musical.

What makes the House Of Mirrors notable is that your visual senses are overwhelmed, sometimes with true images and sometimes with distorted ones.  Sometimes what you see is real, through normal glass rather than a reflection.  After some time in the House, your brain's ability to sort real from fake will suffer.

This is exactly what we are seeing with gun control today, particularly in Virginia.  Well funded Democrats seized the entire state government - Governor, Senate, and House of Delegates - from what looks like a complacent and disorganized Republican Party.  Much (or even most) of the funding came from Michael Bloomberg's gun control organization, and so there's been a tidal wave of proposed draconian gun laws.  The media, biased as ever, is going right along with this.

Virginia gun owners have rallied.  The most spectacular result of this is the Second Amendment Sanctuary movement, which has signed up over 90% of Virginia's counties.  These counties are on record saying that they won't participate in law enforcement actions against gun owners exercising their constitutional rights.  What this will mean in practice is anyone's guess, but without doubt this is a big PR loss to the Democrats.  Go, Virginia!

But it isn't stopping there.  The Virginia Citizens Defense League (VCDL) has held annual "Lobby Day" events where a bunch of gun owners descend on Richmond and buttonhole their Delegates to let them know that they have some clout.  VCDL is planning another such event for the week after next.  The problem is that they're about to walk into a House of Mirrors.

Remember, this is the same news that ignores the pictures of the Governor dressed in KKK robes.

It seems to me that there are two groups of people who matter in the audience, and I can't see a path to successfully engaging either:

1. The general public.  They will get their news from TV, from the paper, from Youtube, and from Social Media.  Each and every one of these can be assumed to be in full censor mode, suppressing good messaging and images while hyping any dumbassery (whether natively among the protesters or from false flag operators).  The VCDL has zero control over this.  Expect for public support for gun ownership to slip somewhat in the aftermath of this media House Of Mirrors.

2. The Delegates.  Democrats here will not be impressed; after all, they just won an election and swept to control over the entire state government.  Republicans will watch the effect on the general public.  If support for gun ownership goes down (whether a little or a lot), then the whole lobby day exercise will be driving in reverse.  Again, VCDL has zero control over this.

What is particularly unfortunate is that this comes hard on the heels of an overwhelming victory in the sanctuary movement.  That effort played to gun owners' strengths and avoided their opponent's strengths.  There was very little formal media presence in the almost 100 county meetings discussing sanctuary resolutions.  Almost all social media was from the pro-gun side.  This was key in the PR triumph.

That's not what will happen the week after next.  Indeed, it will be the reverse.  Why would anyone expect a massive PR win for the Democrats under these conditions?

Aesop seems to be shouting into the wind, although he speaks the Truth:

Anonymous commenters at his place make it plain that they have no intention of even looking at the yawning chasm that they're about to tumble into.  This is unfortunate because most of us find ourselves tethered to them, and they're fixin' to pull us all in after them.

Sure, it's a Cold Civil War.  Sure the Democrats are doing this to show the Deplorables who's boss.  Sure, none of this will change violence or crime levels one bit.

We have the same issue up here in Canada. We are much more liberal than Americans - so we are a couple flushes further down the leftist crapper than you guys. Recently the shitlibs decided that the Swiss Arms service rifle was too scary - and reclassified it as a prohib. If you owned one of these $3000.00 semi-autos - you had to turn it in for the scrap shredder. I think they might have had one actually turned in. Everyone else basically ignored the law and refused to cooperate. The law was eventually reversed because of lack of interest.

This is the real way the leftists shoot themselves in the balls. The real issue of impeachment wasn't so much the abuse of the process - although that is grounds for hanging by itself... the real damage is that in one fell swoop, the Donks made impeachment law irrelevant. Lord help you guys if you ever do get a president that needs to be impeached and removed - because the legal groundwork for doing it has now gone out the window. That will almost certainly work to the benefit of the Donks far more than your repubs... but they may capitalize on that too. They are creating a society where if you play by the rules, you're a sucker. We've already done that here in Canada.

I don't see any answer for it other than a hot civil or culture war... we are no longer nations of laws, we are nations of feelings... and I blame the women and the grifters for that. We might be able to deal with the grifters...but the women are a whole different can of worms.

I yell because I care.

And there is this... Caught on hot mic... https://pjmedia.com/trending/hot-mic-catches-two-virginia-democrats-scheming-to-ignore-speeches-by-mixed-up-little-kid-gun-guys/

found some unused retirement time to hit the range for some pistol long range(fifty meters). with my daily carry, a four inch XD.45, I managed some ten inch groups, but definitely some dead water mellon sized groups. then I pulled out the FNX45 with a 5.3 inch bbl. much better sight radius. four inch groups at fifty meters...
then I did some CQB drills on down to three meters. well, if I don't hit them at three meters, I will at least frighten the bastards to death.
a fine fell day was had at the range on the Pawnee National Grasslands shooting range near Biggsville CO.