Earlier this year The Queen Of The World and I went to Albuquerque for Mom's 90th birthday.  While we were out there we went on a hike in Petroglyph National Monument.  Ten years ago, Mom and Dad went on that same hike.

The Queen Of The World is no stranger to petroglyphs.  She took a photo of this one in Death Valley. 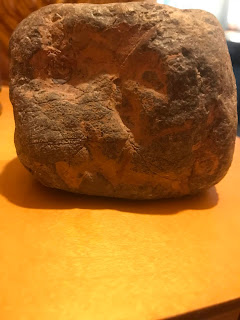 But the meaning of the glyphs remains the same: I was here. 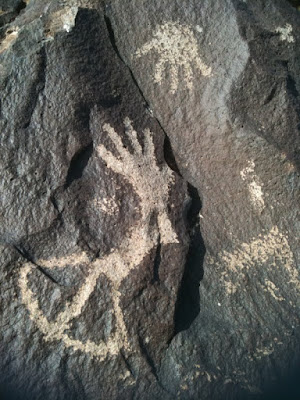 In Egypt's sandy silence, all alone,
Stands a gigantic Leg, which far off throws
The only shadow that the Desert knows:
"I am great OZYMANDIAS," saith the stone,
"The King of Kings; this mighty City shows
"The wonders of my hand." The City's gone,
Nought but the Leg remaining to disclose
The site of this forgotten Babylon.

There is something basic in the human spirit about building, or at least marking the landscape. Making something permanent. Life is fleeting, and making something that will withstand time and the elements better than our poor selves seems to come from deep in the soul.

Albuquerque is built on volcanoes. Long extinct, the horizon is marked with a chain of cones, and the landscape is littered with black volcanic rock. This makes the site unique in the area, and the ancient Anasazi people used it as a landmark. 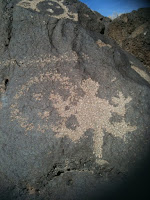 They also took the opportunity to leave something personal. As the molten lava cooled, a thin black lacquer formed on its surface. Chipping off this layer revealed a lighter rock underneath, making it a natural medium for graffiti.

The origins of these petroglyphs are lost in the mists of time. They certainly pre-date the current Indian inhabitants, who migrated south from Canada in the 15th and 16th centuries - perhaps looking for warmer climes during the depths of the Little Ice Age. Both they and the Anasazi lacked writing, and while they have great epic tales, those tales say nothing of the petroglyphs. The Anasazi certainly had tales like these, but they are gone, and the tales lost with them.

Only the petroglyphs remain. Permanent, they will be here likely millions of years from now, long after we are gone ourselves.

I prefer stone (and brick) for my building, and have developed my poor skills to the point where I can build a wall that is (mostly) straight, plumb, and square. Dry Stone has a particular magic to it; lacking mortar, all that holds it together is gravity and the friction between the stones themselves. Done right, it will last far longer than I, or will take more work to disassemble than most people will care to do. It says that I was here. I made this thing. 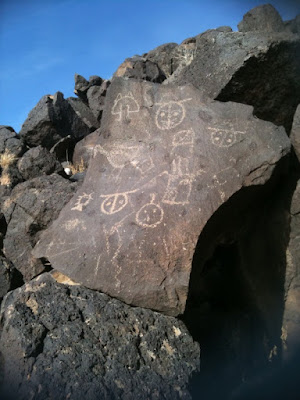 We wonder, and some Hunter may express
Wonder like ours, when thro' the wilderness
Where London stood, holding the Wolf in chace,
He meets some fragments huge, and stops to guess
What powerful but unrecorded race
Once dwelt in that annihilated place.

Labels: Deep Thinking, Queen of the World, Ten Years Ago

While in Wyoming hunting, one of the locals allowed as there were some petroglyphs known only to a few of the local ranchers and they aimed to keep it that way.
There must be a lot to discover yet.

I was waiting for a train to pass tonight. The graffiti on the rail cars fulfills the same need.

Been wrestling with impermanence a bit lately. "But since those Romans were in an earthly city, and had before them, as the end of all the offices undertaken in its behalf, its safety, and a kingdom, not in heaven, but in earth,—not in the sphere of eternal life, but in the sphere of demise and succession, where the dead are succeeded by the dying,—what else but glory should they love, by which they wished even after death to live in the mouths of their admirers?" Augustine, City of God, early 5th century.

"I prefer stone (and brick) for my building, and have developed my poor skills to the point where I can build a wall that is (mostly) straight, plumb, and square. Dry Stone has a particular magic to it; lacking mortar, all that holds it together is gravity and the friction between the stones themselves. Done right, it will last far longer than I, or will take more work to disassemble than most people will care to do. It says that I was here. I made this thing." -Borepatch

In your travels, should you ever venture into rural Northern California take the time to ride A17.
It starts out of Cottonwood and winds up at Hwy 44.
Along its route a local guy who made it big has built a dry-fit stone wall out of the abundant volcanic rock from his properties.
I think he was inspired by the still standing rock walls built by the early ranchers in the area using Chinese labor.
It winds for miles. It is very impressive. The fitting of the stones is...well, you have to see it. I will email a photo next time I pass by.
If you go, stop by the Coleman National Fish Hatchery on the way. They have a very nice pic nic area.