A Girl's Guide to the Grill - A Brigid Post 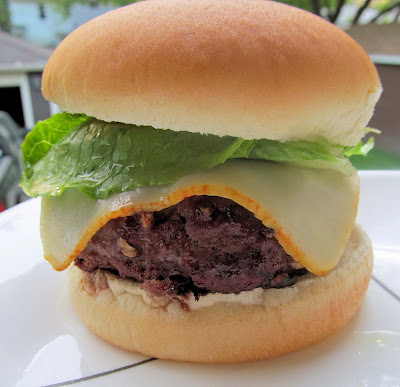 It's grilling season again.  The trusty charcoal grill is out under the Spruce trees and there is ground beef from our local Polish grocery store (with butcher!) to form into perfect patties.

Sure, that crockpot last weekend was great, but it's time to barbecue: 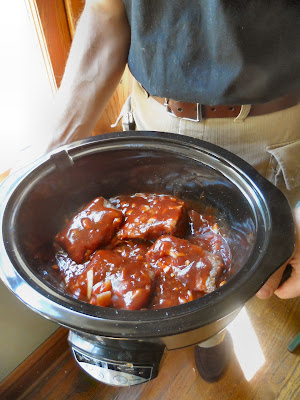 First, there was a little cleaning up in the garage as the barbecue was brought out of hibernation. 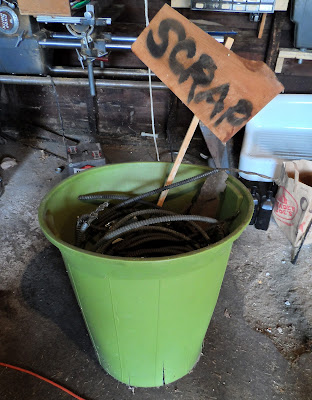 What Scrapple is Made From (explains the chewiness).

But then it was time to light off the coals.  I like a charcoal grill, an old one, just like my Dad used.  I even had a little one at the Crash pad that a friend in Texas sent me.  Gas/Propane have no thrill.  You turn a switch, you turn it off. A Charcoal grill compared to one of those is like comparing a radial engine to a jet engine.

Like a grill, it's easy to teach someone to start a jet engine, anyone with two fingers can do it.  You just need to move a switch from "OFF" to "START" and them remember to move it back to "ON" after a while. Sometimes you don't even do that, as it's spring-loaded back to ON.

To start a round engine you need two hands that can move like a hummingbird on crack. The right hand for the primer, energize and engage switches, the left hand being busy with the throttle, magneto then back to the throttle to control the starting RPM and then for the mixture and. . . . 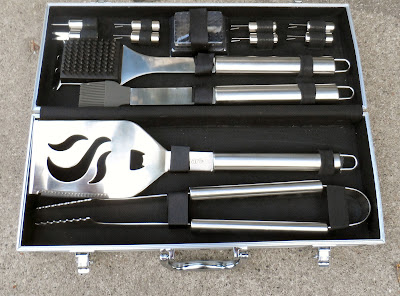 Even being ambidextrous and nimble isn't enough start a round engine, you seduce it into motion, which requires skill, finesse, patience, a gentle touch and a fair bit if style. Failing that there is curse words. If that fails there is meditation and celibacy.

Why?  For starters (pun intended) there is no computer controlling the fuel/air mixture. If the mixture is too rich you'll end up with parts of the engine that look like wet charcoal briquettes and then it's NEVER going to start. If it's too lean it won't start.  Some of  the pilots would say the mixture is like being married, giving you new ways every day you can be wrong.

Jet engines start by whining a little, then give a delicate girly little "poof"and start whining a wee bit louder. Round engines give a satisfying rattle-rattle, click-click, BANG, more rattles, another BANG, a big manly BELCH, followed by the explosive resonance of  a mechanical FART, more clicks, a bunch of smoke and finally, the serious perfection of low pitched roar. It's the sound that machines should make.

So yeah, I use an old fashioned barbecue.

First - let's get the meat ready. There are some easy steps to get a burger that's bun sized AND juicy. 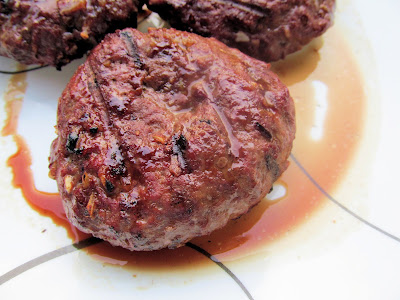 You want to start with a meat mixture that is not too lean. Venison is healthy and tasty prepared properly, but for the perfect grilling burger, I prefer beef. The most flavorful and juicy burgers are not the low-fat versions, but simple 80% lean beef.   If you have a butcher that will grind the meat (or grind your own), ask them to grind it using a a coarser grind than the pre-packaged stuff. It's not as dense and it feels juicier, with that slightly crisp on the outside feel in your mouth.

Seasoning - Simple salt and pepper is always good, however. . . .

the Range hamburger seasoning is pretty basic but gives the meat a nice smoky flavor that's a bit spicy, but not too much, or too sweet, like some hamburger sauces. 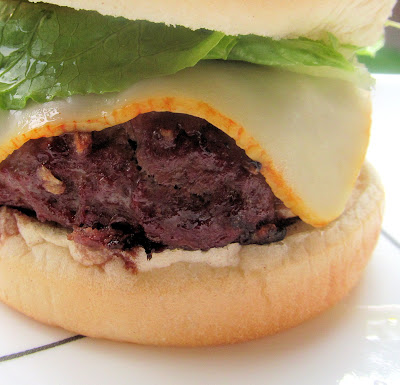 Good topped with cheese and lettuce, or perhaps Tequila Lime coleslaw with some baked beans

You want to handle the meat as little as possible. The more you squish it around getting the spices blended, the denser your patty will be.  Premix the seasonings together, THEN mix with a spoon. If you've defrosted the meat and it's "wet", add a couple teaspoons of bread crumbs (Big Bro's favorite tip for defrosted meat that was "wet" was to add a packet of  instant maple oatmeal to a pound or a pound and a half of meat, something I never knew for years and his burgers were great!)  If it's a leaner cut or venison, add a little liquid - olive oil, Worcestershire sauce, BACON FAT (subliminal message), or balsamic, etc. 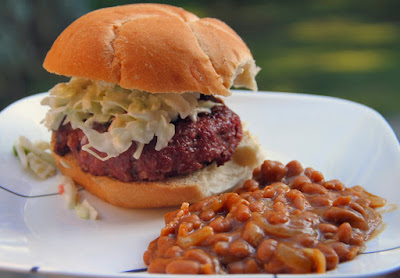 Let the meat sit at room temperature about 30 minutes (but not much more than that).  Why?  Have you ever watched or participated in one of those "Polar Bear" meets where normally sane people jump into freezing cold winter water en masse like demented lemmings? (OK, once, it involved a pool on New Years, a bunch of  pilots, martinis, and it was California so it wasn't exactly FREEZING winter water)

That's a shock to the system.  It's the same if you put your nice burger from the cold fridge onto the hot grill.  You'll just end up with a tough burger. 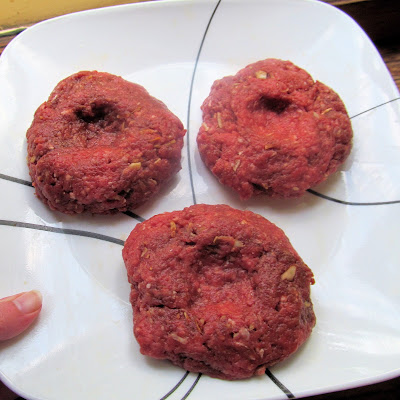 Yes, my patties look like blood cells. When hamburgers cook, the middle tends to plump up. That makes the toppings slide off and make the burgers shrink. You've seen it, you start out with a nice big patty and when it's done it's half the size of the bun. Burgers WILL reduce as they cook, especially the 80% lean, but the "dent" helps a bit. Make the patty about 15 - 20% wider than the bun, Make the dent about as half as deep as it is wide in in the otherwise "sort of" uniformly sized patty.

OK, now that  your meat is resting, get your grill ready. I like to use a "chimney" to get some hot coals going.  The chimney generates a strong updraft that quickly turns briquettes into hot coals.  It was pretty simple. Put 3 pieces of newspaper in the bottom, pile the coals on top, light the paper, wait 15 minutes. Look down in there, they should be JUST about ready. At 18- 20 minutes, dump them out and you've got hot coals.

What materials are on hand.  Hmmm.  Cardboard box?  That would be a no?  Styrofoam?  Also a no.  Fruitcake?  The fruitcake itself would never burn, but I'm afraid of a chemical reaction between brandy infused cherries and Coleman fuel. (likely the source of the original  "cherry bomb") So no. 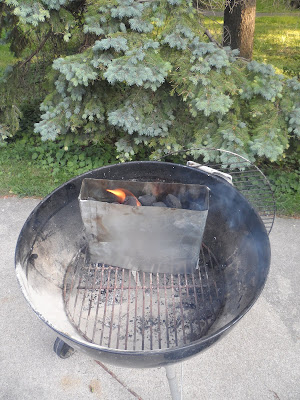 How about some 16 inch non-galvanized duct work? To the Bat Shop! To speed up combustion, you can use a hammer and a large to punch vent holes in the bottom 2 to 3 inches of the pipe. (You may need to brace the inside of the pipe with a chunk of wood as you punch these holes.)

Even without vent holes, it will still work, Crumple 2-3 sheets of clean newspaper in the bottom, leaving a few edges sticking up where you can get a match to them. Fill almost to the top with charcoal. Add just a dash of lighter fluid to a few of the briquettes. Do not soak them with it, the newspaper and the chimney will do the work.

Now step back and wait several minutes. Fire Marshall Bill says so.  You don't want vapors on you or in the immediate area when you light it off.

After a few minutes have gone by, light the paper, stepping immediately away, and wait for combustion.. 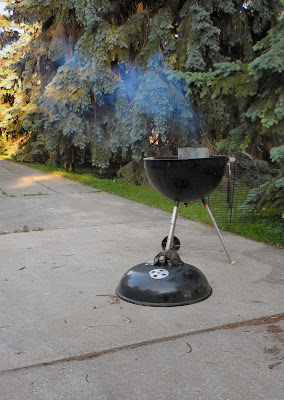 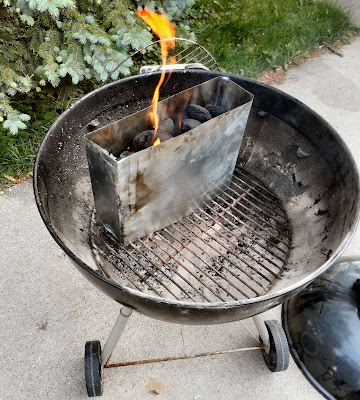 When you see white ash on the coals near the top. It's ready to pour out onto the grill

Wait, there's no handle on this thing!

Fortunately for us, have the Brigid Universal Pot Handle Tool ™ 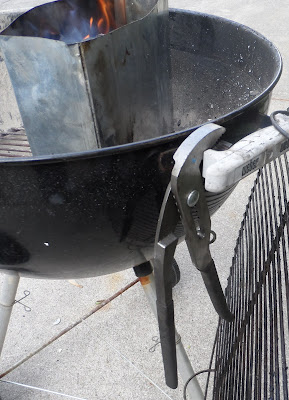 Set the chimney on something non-combustible, and away from children, stupid friends or relatives or pets as it will stay HOT for a while.

Now that the coals are hot and spread around, it's time to cook. 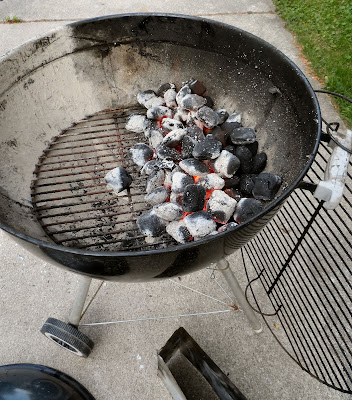 Cook the patties "dent" side up first. Once those burgers are on the grill, don't press down on it as they cook. It won't cook faster, it'll just dry out quicker. Try and only flip it once.

Use a meat thermometer to determine doneness. Some meat will stay pink in the center even when they're hot enough, and fattier cuts can brown before they're fully cooked. Stick the thermometer in the thickest part, it's done when it reaches 165 F.

Have some napkins handy, for these are some juicy burgers. 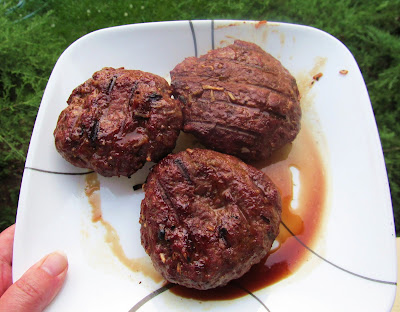 BUT DO NOT FORGET THE LAWS OF BOTH AERODYNAMICS AND  PHYSICS.  If you bend over to set something down, beer will spill.

We paused for a moment of silence. 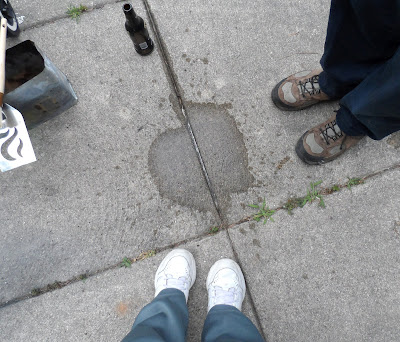 thanks, and thanks for the firemarshal bill , "let me show you something"

Bummer on the beer! I knew about the dents in the burgers, but never heard of the maple flavored oatmeal...putting that on the shopping list right away!