So farmers are too dumb to understand hi tech?

The Queen Of The World tells a story about a new sales rep being taken around his region by his sales manager.  They end up out in the sticks, and pull into a diner for lunch.  A bunch of farmers are at a nearby table, dressed in overalls and John Deere hats.

The new sales manager sniffs at the spectacle.  "Man, they they sure look like a bunch of dumb hicks," he said.

His boss smiles.  "You see that field across the road?"

The young guy says he does.  "How much fertilizer do you think that would need for a corn crop?"  The young man doesn't know.

"If you wanted to plant soybeans, how many plants per acre would give you the best yield?"  Again, the young man doesn't know.

"When should you plant to minimize the risk of late frost while maximizing the growing season?"  Again, nothing.

"Well, if you go over and ask those 'dumb hicks', every one of them can give you the answer." 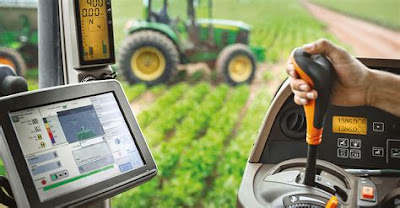 And if you go to your local County Fair, you can see all the computer monitors in the tractors and combines.  Oh, and the latest GPS farming tech.  Just sayin'.

Little Mike showed once again that the intelligence of the political class can be pretty stupid.  The Re-Elect Trump 2020 Campaign thanks him for his support.


Education, n. That which discloses to the wise and disguises from the foolish their lack of understanding.

Easiest way to destroy good farm land? Let a city leftist try to go 'all natural and 'organic'' on the field.

The northeast and the west coast is full of ex-farmland that has been ruined by city leftists moving to the country and trying to 'Green Acres' their way to success, and failing.

Maybe it's prescient that Green Acres is a community west of Bakersfield and Pixley is a town north of there a few miles.

Yeah... I arrived here in Rural America with a fairly long list of known unknowns, and I'm still stumbling over unknown unknowns. At least I'd rid myself of a lot of the stuff I knew for sure that just ain't true, over the past decade or so. (Ten years ago, had I thought about Tennessee at all, it would have been almost entirely misconceptions.)
And I'm just planning on hobby farming, on a small scale and with relatively simple equipment; it's not like I'm trying to make a living at it. We shall see how this summer's victory garden goes.
(Just had a very basic small-tractor lesson, and will be needing to learn the mysteries of the 3-point hitch. I've been getting the hang of driving, and parking, a pickup truck, after 18 years in a Prius. Soon, I need to learn about selecting, rigging, and towing a trailer. Also, there's carpentry to be learned. And fence construction. And....)

Native New Yorker here, in the mid aughts I worked for an engineering services provider (wifes family farm was in the next town) that was ranked #1 in the world (among 17,000 firms) for Mechanical Engineering. We were also top 10 in 7 other disciplines. The office was in the heart of flyover country, Peoria Il.

Perot Systems was so impressed with this that they bought the company. 500 engineers who solved problems for a bunch of Fortune 50 firms. Some admit to it others (I'm looking at you Harley) don't acknowledge the assistance. The picture of the computer in the tractor was most likely done by my friends.

Mini Mike you can FOAD, those engineers were mostly farmer stock or actual farmers. With in a driver and a five iron of the farm was an Internal Medicine Chief of Staff, Lawyer, High School Principal, Science teacher and History teacher. These are the guys who make this country, not you midget money mover rent seekers.

I have a cousin, in her mid-70s, who is a lifetime family farmer somewhere in the Mid-west. Her day begins well before dawn, no matter the weather, and doesn't end until well after dark. There is not a minute of her day that doesn't include tending for animals, raising crops, fixing equipment, or buildings, plumbing or fences.

She has no hired hands, her children have decided that college-based jobs are easier than farm life. It's her family's farm; it's her responsibility and legacy. It's not uncommon for there to be young calves in her kitchen in the winter to save them from the cold, or to hear her pray daily for rain in the summer to save her crops from the drought. Vacations are something that last a day, but only if she can get one of her neighbors to watch over things while she's gone, and never take her much farther than one or two hundred miles from her front porch. Still, she finds time to bake nearly every day, and she is recognized for her abilities as a quilter.

Michael Bloomberg: if you wouldn't mind trading your tailored suits and Italian shoes for denim, flannel, and work boots, if you wouldn't mind leaving your Liberal limousine parked next to the barn, and riding shotgun in an old pick-up truck, or hanging on next to her on her John Deere tractor while she brings hay and feed out to her cows, if maybe you wouldn't mind swinging an axe to help break the ice off the stock tanks so the cows can have water, I'm sure she'd be happy to discuss what farming REALLY means with you while she's trying to teach you how to milk cows, and maybe then you might have a clue what Americans do who don't have a $60 Billion cushion for your fat ass.

I hope my machining students don't hear how easy lathe work is, as I will be out of a job. As I mentioned, the elites have nothing but contempt for people who work for a living. This contempt is derived purely from ignorance and their isolation from the means of production.