First he broke the Republican establishment who - while still with us - are cowed and have lined up behind his agenda.  Last night we saw how he is breaking the Democratic party.  That's not too strong a term.

What struck me watching the State of the Union Address last night was how the Democratic caucus is so visibly split.  The thing to watch for is applause (especially standing ovation).  The Republican side did this every minute or two during the speech.  The reaction from the Democrats fell into three camps:


That last one is the tell.  The Democrats have been impressively united for the last couple years (particularly Nancy Pelosi's impeachment farce), but this looks like it is over.  Dramatically and visually over.  This must frustrate the Democratic leadership, and we saw Nancy Pelosi lose it last night. 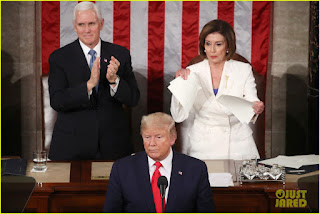 I can't remember a major political figure act in such a petty and, well, useless way.  She did nothing to help her political situation by ripping up the printed copy of the speech, and likely damaged her ability to bring together a divided Democratic caucus.

And Trump did this.  Four years ago during the campaign I remarked here that I didn't know if Donald Trump would make a good President or not but that we were fixin' to find out.  It's kind of amazing to see this unfold before us.
Posted by Borepatch

So, if the Democrats are the Evil Party AND the Stupid Party, what are the Republicans now? :)

We've all seen the video of Pelosi ripping her copy of the speech in half.

The problem is that it wasn't hers to destroy. It was an official document signed by the President (as are all "bench copies" of the SOTU handed to the VP and the Speaker).

By destroying this document, Pelosi committed an actual crime: she violated the federal records act.

This could get very interesting.

Eagle, she won't even get a hand slap for that... sigh... And yes, he hung all kinds of albatrosses around their necks last night. What I find funny is that the fact checkers even had to admit most of his claims were correct, but then tried to weasel word that the 'fact' was taken out of context... LOL

Twas very interesting to watch, and especially when "Four More Years" broke out early on. I thought SanFranNan's face was going to explode when that happened.

The reaction last night makes me think that, yes, indeed, unless serious fudgery occurs, the impeachment will die today.

No doubt to pick up again next week over the way he dresses, or he smiled inappropriately or something. Maybe his farts smell weird?

And, yes, I've already heard idiot dems in this idiot city I live in say, "We'll just impeach him over something else, like he's actually Hilter, right?" Which I, of course, had to say loud enough for idiots to hear that Trump is the worst Hitler ever, and then break it down for them.

I do enjoy cheap public thrills.

Back to the SOTU, Trump's performance last year was great. This year? Dude, what are you going to do next year?

Vote these "Fake Americans" out of office.
Cut your cable and buy an amped HD antenna for free channels.
Do not support the lying fake news by using cable.
YOU WILL STILL HAVE YOUR INTERNET.
Take those energy hog cable or dish boxes back to your provider.
The only thing they understand is a hit to their revenue.