How Science goes off the rails

Ten years ago today I put up this post about how Science wanders into the weeds.  Not only has it held up particularly well, I think that this is one of the top ten posts I've ever done here.  Plus, Brother-From-Another-Mother ASM826 took me to his shooting range.  Not a bad day, all in all.


The Canals of  the Climate Research Unit In 1877, the Italian astronomer Giovanni Schiaparelli observed faint lines on the surface of Mars. He called these lines canali - channels. When his findings were (mis) translated into English, they appeared as canals, and ignited the imagination of the world.

Rather than natural causes (as you would expect for channel), canal implies artificial construction. The thought of intelligent life in our solar system - an ancient race fighting a desperate battle for survival on a dying planet - caused legions of astronomers to rush to their telescopes. Others reported that they also saw canals. Some published maps. But nobody saw as many canals, or published such detailed maps, as Percival Lowell from his Flagstaff observatory, whose map appears here. 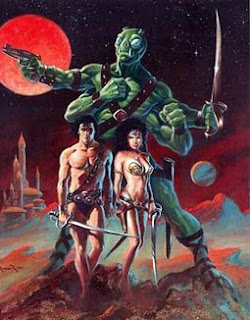 It wasn't just scientists whose imaginations were captured by the Martians. The press promoted the story almost hysterically, giving Orson Wells his opportunity to create mass panic with his radio dramatization of H. G. Wells' novel The War of the Worlds. But the Barsoom novels of Edgar Rice Burroughs were the best.

John Carter was the human hero, mysteriously transported to Mars. Caught up in the epic battles there, as the slow drying of the planet led to desperate wars among the populations, his adventures amidst beautiful Martian princesses and noble Martian warriors fired the imagination of this young boy, back around 1969.

Alas, by then we knew that it was all impossible. Mariner 4 reached Mars in 1965, and photographed the entire planet from orbit. No castles holding Martian princesses, no Orovar cities, and most definitely no Zodangan canals. So how did the entire scientific community spend three decades chasing a Will o' the Wisp? I mean, this stuff was peer reviewed.

Eric Raymond has an interesting thought that seems to apply to both the science of Mars and the current theory of Anthropogenic Global Warming (the theory that human production of Carbon Dioxide is causing the planet to warm). Most scientists are caught up in an error cascade:

A scientific error cascade happens when researchers substitute the reports or judgment of more senior and famous researchers for their own, and incorrectly conclude that their own work is erroneous or must be trimmed to fit a “consensus” view.

In extreme cases, entire fields of inquiry can go down a rathole for years because almost everyone has preference-falsified almost everyone else into submission to a “scientific consensus” theory that is (a) widely but privately disbelieved, and (b) doesn’t predict or retrodict observed facts at all well. In the worst case, the field will become pathologized — scientific fraud will spread like dry rot among workers overinvested in the “consensus” view and scrambling to prop it up. Yes, anthropogenic global warming, I’m looking at you!

When a few influential scientists publish important work, younger scientists will often defer to "established" results that contradict their own, even if the established results are wrong. Science tends to self correct this sort of thing, although it can take a while - the mass of the electron was incorrectly specified for years and years, because everyone who measured it got a different result than Robert Millikan. Millikan had received the Nobel Prize, and they hadn't, so their results "had to be wrong".

And so with AGW. Strong evidence opposing it "can't be right" and weak evidence supporting it "must be right", and as a result, AGW is an astonishingly weak theory. In the last twenty years its proponents have made many predictions, most of which have been falsified. Michael Mann said that the Medieval Warm Period wasn't warm, contradicting recorded evidence from the period like the Domesday Book that showed wine vinyards in England in the eleventh century. AGW computer models predicted a warm layer in the middle Troposphere in the tropics; MIT's Jim Lindzen and others looked and looked - no warm zone. NOAA's Global Historical Climate Network (GHCN) is the most comprehensive store of historical climate data; people are finding that the data has been frequently, consistently, and mysteriously adjusted so that older temperatures are lowered below what the thermometer readings showed, and recent temperatures are raised above what the thermometer readings showed.

It's an error cascade of epic proportions. The situation is almost like an astronomer in 1965 continuing to insist that the Mariner 5 pictures are irrelevant, because there is a mountain of peer-reviewed literature supporting Ptarth hydrological engineering. Phil Jones of the CRU admits that the Medieval Warm Period was warmer than today, and that the climate is not getting warmer lately - despite the theory predictions, and that his data is a mess (which is why he refused to release it, even after a Freedom Of Information Act request).

And yet the Climate Scientists still see canals.

Raymond points out why:

There an important difference between the AGW rathole and the others, though. Errors in the mass of the electron, or the human chromosome count, or structural analyses of obscure languages, don’t have political consequences (I chose Chomsky, who is definitely politically active, in part to sharpen this point). AGW theory most certainly does have political consequences; in fact, it becomes clearer by the day that the IPCC assessment reports were fraudulently designed to fit the desired political consequences rather than being based on anything so mundane and unhelpful as observed facts.
When a field of science is co-opted for political ends, the stakes for diverging from the “consensus” point of view become much higher. If politicians have staked their prestige and/or hopes for advancement on being the ones to fix a crisis, they don’t like to hear that “Oops! There is no crisis!” — and where that preference leads, grant money follows. When politics co-opts a field that is in the grip of an error cascade, the effect is to tighten that grip to the strangling point.

Eisenhower famously warmed of the growing Military-Industrial Complex, an alliance between the Government and Industry to justify and fund continuing increases in Government and its Industry allies. Follow the Money. How is this not identical to what we see happening in climate science?  Billions of dollars of Government grant funding flowing to academic organizations, whose research (surprise!) provides justification for large Government programs like Cap And Trade. Government funding maintains the momentum of the error cascade.

The challenges to the AGW "consensus" have almost all come from outside of this "Environment-Academic Complex", as they would have to. Outsiders are free to report what the data actually say, without fear of losing their funding. As Raymond said:

If politicians have staked their prestige and/or hopes for advancement on being the ones to fix a crisis, they don’t like to hear that “Oops! There is no crisis!”

Thus the emphasis demonstrated by the ClimateGate emails on controlling the Peer Review process. If the narrative can't be directed at the front end, it must be channeled at the back end. The canali of the modern scientific process are indeed man-made.

And so, the debate isn't about science at all, any more than the debate over the XM2001 Crusader self-propelled Howitzer was about defense. I expect to hear any day that NOAA plans to appoint Dejah Thoris to head the new office of Climate Change. 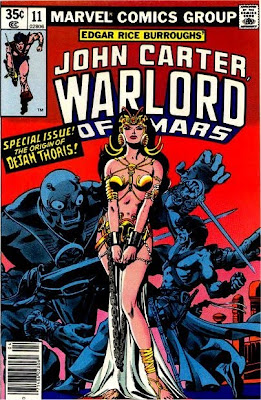 I hope they don't make her wear a brass bikini. It wouldn't provide the dignity that the office demands.

UPDATE 15 February 2010 22:28: Boy, I picked a bad day to toss out a post and then head out for 8 hours in the car and 4 hours at the range (not that it's ever bad to spend 4 hours at the range). Welcome visitors from View From The Porch! Thanks, Tam, and the beer is on me. Anyone interested in a somewhat long-ish overview of the science of AGW might want to start here.

UPDATE 15 February 2010 23:43: This is another interesting comparison.
Posted by Borepatch

The Barsoom novels are still the best. Tarzan not so much. Actually Tarzan sucks until Johnny Weissmuller. Because he learned to speak English from a book. Withput being taught to read. Can't accept that. Can accept the fauns and such from "The Lion, The Witch, and The Wardrobe" but can't accept that.

My ex-in-laws were fanatic enviromentalists. My father in law - who lived in a sprawling howm with a three car garage, and a fully loaded big diesel truck would come over and start haranguing me about 'carbon foot prints'. Occasionally I'd throw a pop or beer can in the garbage just to watch him flip out.

We've both seen the pics from the era, BP. There is no way on God's green earth that ANYONE could see artificial canals or straight lines anywhere in them. Or at least, I didn't see any in the blurred pics I saw. As far as I am concerned, some seriously stupid people pushed their way to the front of the parade and hijacked it.

Glen, one theory is that the astronomers were seeing patterns from their retina, which explained the lines.