Ten years ago I put up what may have been the strangest post I've ever written.  What's funny (both funny ha ha and funny weird) is that it ended up as a reference on a Wikipedia page (!).  And it got a comment from early blogger Steven den Beste (fanboi squeee!).


Automatic pistols, the Burgess Shale, and the evolution of design

Warning: this is a strange post, probably the strangest I've ever written. In a way, it's a transmission direct from Planet Borepatch. Don't say I didn't warn you.

In the beginning, nobody knows how something "should" work. When a new opportunity to do something differently comes around, you typically see a lot of different things get tried. This applies to people, when a newfangled way of doing something gets proposed. This also applies to nature, where a major ecological shift opens up new evolutionary pathways.

Paleontologists call this Adaptive Radiation followed by Decimation, and is best illustrated by the sudden appearance of almost all modern animal families in the Cambrian Explosion (ca 540 M years ago), followed by the extinction of many other animal families soon after. Many of these extinct organisms are captured in the Burgess Shale, probably the most important fossil field ever discovered. The definitive work on the subject is Steven Jay Gould's Wonderful Life.

The Burgess Shale is important for two reasons: first, it's very, very old, dating back almost all the way to the Cambrian Explosion itself. It gives a record of the animals alive only ten or twenty million years after the beginning of the Cambrian period. Second, it preserved as fossil not only hard shell and skeleton remains, but soft tissue as well. This is incredibly unusual, and the combination gives us an extremely detailed record of life in the Early Cambrian, when modern animal forms had only just emerged.

But there were strange forms as well, ones that have not been seen since. You might think of them as experimental designs that were briefly viable but which were out-competed. Designs unrelated to any living species. Designs like Hallucigenia, where scientists aren't sure if the blob on the end is the head: 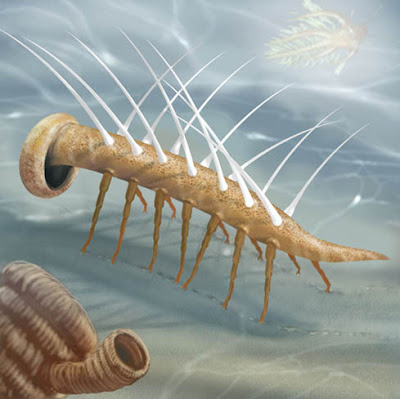 And Opabinia, where different scientists have proposed very different reconstructions of the animal. This is one: 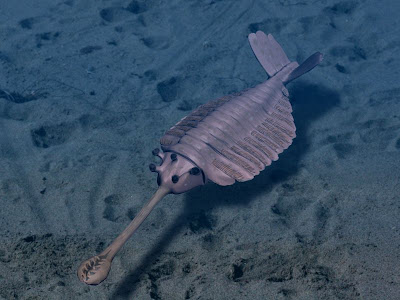 And Anomalocaris, originally thought to be three different creatures, from the fragments of its very different body parts: 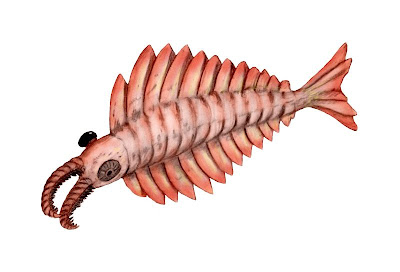 All initially viable designs in the Brave New Multicellular World, but soon gone in the subsequent Decimation.

We see this when evolution is driven not by mutation but by human ingenuity, and weeding not via Natural Selection but via the Market. Automatic pistol designs exhibit a very similar "radiate and decimate" pattern.

Autoloading pistols also appeared suddenly, with a flurry of experimentation in the 1880s and 1890s. The "Cambrian Explosion" event seems to have been Hiram Maxim's invention of the recoil-operated machine gun, which set tinkering minds to work on a miniaturized design suitable for a pistol. What we saw was an explosion of initial designs (including from Maxim himself), rapidly followed by a decimation to the remaining pistol families we see today.

But some of those early designs are as wild as Hallucigenia. 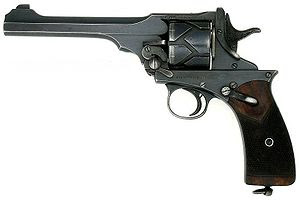 The Webley-Fosbery Automatic Revolver, with one foot in the old and one in the new. The top of the revolver recoiled backwards on a track in the top of the base; a pin mounted on the bottom caused the revolver to rotate, as it moved in the groove in the cylinder. 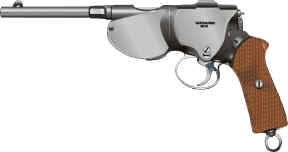 Schonberger-Lauman 1892, the precursor to the Schonberger 1893, the first commercially sold automatic pistol. The late Ian Hogg describes it in his Illustrated Encyclopedia of Firearms: The mechanism is absolutely unique in pistol design, since it relies upon the setback of the cartridge cap due to the explosion pressure in the case. The bolt is locked by a cam surface on a forked arm; when the pistol is fired, the cap sets back about 0.18 of an inch, imparting movement to the heavy striker before the cap is stopped by the face of the bolt. This slight movement is sufficient to cause a lug on the striker to disengage the locking cam, so leaving the bolt free to recoil, swinging the forked arm back against a spring ready to close the bolt once more. 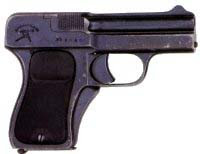 Schwarzlose 1908 Blow Forward design. The breech block was part of the pistol's frame; firing the cartridge caused the barrel to run forward. There is no slide - rather, the pressure of the expanding gas and the friction of the bullet drove the barrel forward against a spring. The expended case was ejected, a new cartridge was loaded, and the spring pushed the barrel back into place ready for the next shot.

The Pieper 1907had a tip-down barrel, below the recoil spring unit housed in a tunnel on the top of the pistol. The design was unique for how slender the final product was, which resulted in a continuing popularity despite its very high manufacturing costs.

Both the fauna of the Burgess Shale and the early automatic pistols went through a Decimation phase, where a large number of designs were weeded out. The Burgess fauna converged on the major phila that we see today - arthropods, chordates, gastropods, etc. The automatic pistols market was revolutionized first by the Luger, and even more so by the 1911. Why?

Steven den Beste wrote about the Burgess Shale years back, in the Pleistocene Age of the Blogosphere. I found his conclusion to be more compelling than Gould's, who said that it was pretty much luck that determined which survived and which died out. den Beste thought there was more to it:

There's a deeper reason, and it is the thesis here. It's a natural switch from non-zero-sum to zero-sum competition. At the time of the Burgess Shale, that switch hadn't yet taken place, and in the non-zero-sum "Expansion" phase, things are more forgiving. Once you switch to the zero-sum "Competition" phase, creatures which were viable before cease to be, and will die out.

This sounds right, and seems to apply to pistols as well. Initially production runs are small and the novelty is itself a selling point. But eventually customers begin to figure out how to discriminate more effectively. Some designs were too expensive to be competitive (Pieper), some too cumbersome (Webley-Fosbery), fragile (Luger), or requiring bizarre and hard to find ammunition (Schoenberger). We're not sure why the Burgess fauna suffered so many extinctions, but the reasons could very well be similar: some bred more slowly (like today's tigers), or ate specialized food (like today's Koalas), or were too fragile to deal with evolving predators (in particular, this may have been Anomalocaris' fate).

In the long run, designs rapidly converged on what has been proven to be long-term stable. Tam comments (in a different context):

Materials science moves on and yes, we're living in The Future, but as it turns out, round is still a good shape for a wheel and rubber makes pretty good tires.

Ingenious design is a marvel to behold, but a pistol's business is serious work. Reliability, ease of maintenance, availability of ammunition all provide incremental but (over time) irresistible pressure towards what works. Even an advantage of a few percent in efficiency can be enough for a species to win out over thousands of generations of evolution, or for a pistol to guarantee Great War contracts.

A note to anyone who actually read this far: there is an excellent Web site that deserves your attention. The Corps of the Royal Electrical and Mechanical Engineers in Reading, UK has an outstanding collection of historic weapons, automatic pistols among them. I wish I had know about their museum back when I lived in Blighty. To any UK readers, this might be worth a journey.

The Cambrian Explosion is an excellent analogy for early autoloader development.

Yep, that was one of your more 'interesting' ones... I remember reading it when you originally posted it!

This applies to computers, too. Take a look back to the 1980s and the explosion of designs and operating systems. Once competition took hold, it very quickly decimated the field, leaving us with 2 primary designs Intel and Apple, and three operating systems, Windows, Mac, and Linux.