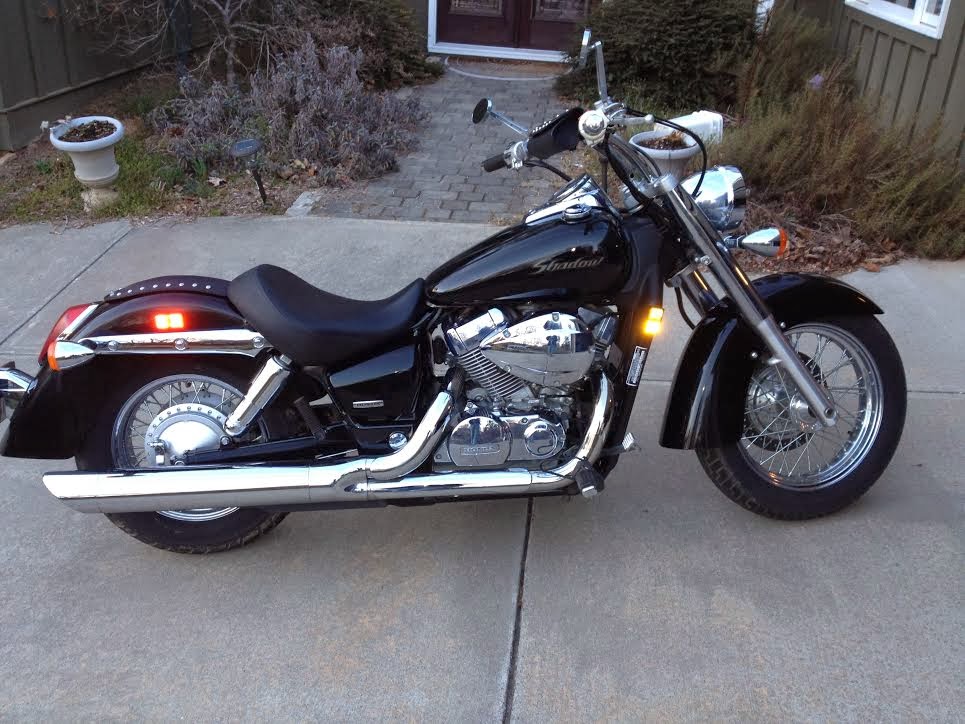 This is my Honda Shadow 750.  I'd decided on a cruiser style, and there was a selection of these for small money.  Since Honda has been making variations of this model for over 40 years, there's a huge after market for customization options.

It weighs about twice what the Rebel does, but has three times the horsepower.  This makes it both peppier off the line as well as having a higher top end.  I rather doubt that I'll ever test what that is - I was doing 60 in third gear yesterday.  The Honda wouldn't top out there, but would be getting close.  I haven't gassed it up, and so don't know the mileage it gets.  I'm sort of expecting 50 MPG or so, compared to the 70+ I get from the Rebel.  The engine sounds much more like a "real" motorcycle (throatier) without being obnoxious. 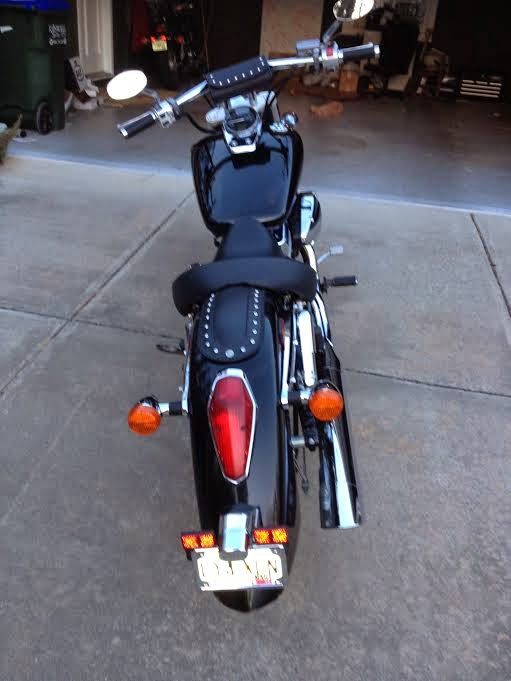 It was an almost effortless step from the Rebel - controls are essentially identical, so it was just size and weight difference.  The bike is very well balanced and easy to control even at very low speed (as opposed to the V-Strom I tried some time back).  The seller was quite some distance away - almost to Alabama - but this gave me a ~ 80 mile ride to get used to things.  This is going to work out just fine. 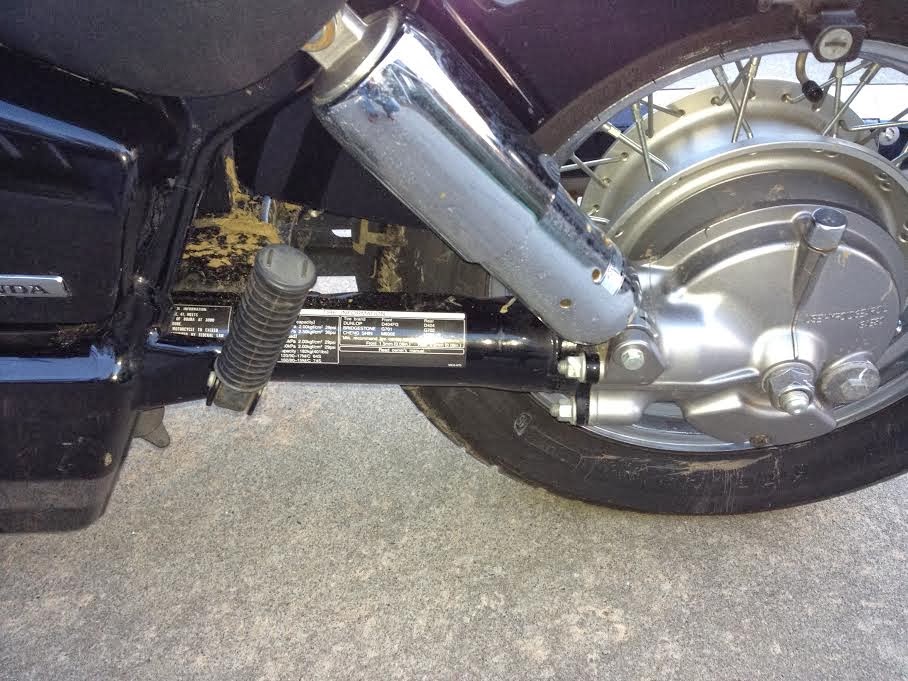 One difference between this and the Rebel is that the Shadow has a shaft drive (just like your car) rather than a chain.  This will reduce the maintenance (nice), likely at the cost of a lower top speed (additional weight and more power loss between engine and wheel).  Since the Shadow has more power than I'm likely to need - at least until I get it loaded with luggage - this isn't really a concern.

It also has a rear drum brake instead of the typical disk break.  I'm not sure that this will make any difference.  Feel free to chime in with a comment on this. 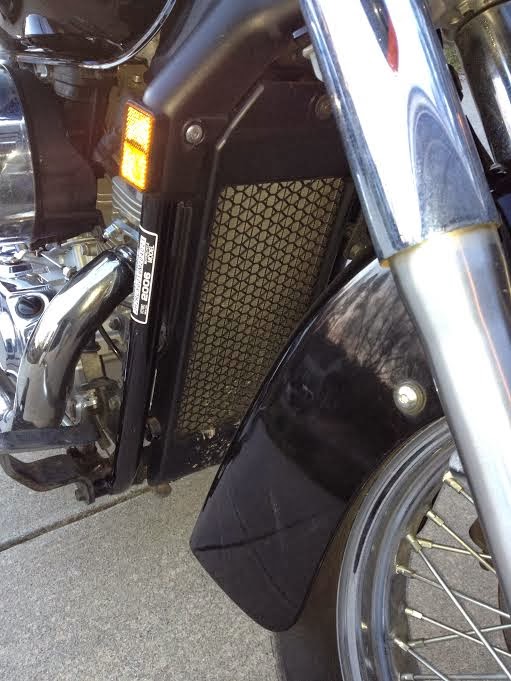 Another difference (and this is a big one) is that the engine is liquid cooled, with a radiator.  This will add some maintenance (flush the cooling system) but hopefully will help the engine run cooler than an air cooled V Twin.  We'll see when things warm up later this year.

This bike had essentially no customizations.  I  picked it over others that were kitted out pretty nicely because it had very low mileage, and was the newest of the bikes I was looking at.  While I'm pretty confident in Honda's reliability, newer and ridden less seem to be an investment that's worth while.

1. Windscreen or fairing.  This easily cruises at highway speed, but the wind blast at 70 MPH is pretty bad.  If I want to take this on trips, this needs to be reduced.

2. Saddle bags.  The Rebel doesn't have them, and while I sometimes take a backpack to the store, bags will be a lot more convenient.

3. Sissy bar.  I have the original rear seat, but a back rest for anyone riding 2 up is a nice addition.  I'm not sure how frequently this will happen, which is why it's down the list.

4. Luggage rack.  A weekend trip probably will take more luggage than will fit into the bags.

So there you have it.  Trip reports as I take them.
Posted by Borepatch

I feel envy creeping into my soul. I had a Kawasaki 650 many years ago. I think your upgrades make sense, and in the order listed. Except I might move the speakers up to No. 2. But I like music.

I'm betting you'll notice a smoother ride on the larger bike, too.

Excellent bike BP - the transition to the midweight bikes is a snap.

Drive careful and watch out for sand on the roads

Excellent bike BP - the transition to the midweight bikes is a snap.

Drive careful and watch out for sand on the roads

I don't think the drum brake makes a significant real world difference. 80% of your braking power is in the front anyway. You're not going to run it hard enough to overheat the drum. I'd say the drum is heavier - which affects handling, but the style of bike, and the way you talk about riding, suggests to me that you're not going ten-tenths anyway.

It's a great bike - I rode middleweight bikes for 20 years. Just so long as you don't mind that it's not "fast" as bikes go, the smaller size, light weight and mileage are real pluses. It'll go fast enough to get you a ticket anywhere except the autobahn.

Best of luck, and many happy miles to you!

Sweet bike.
Named her yet?

Sooo..... Pick a destination for next weekend.

and you're riding it wrong.

Sorry bro.
I just had to do it.

Congrats .... the Honda Shadow is a fine bike.

Keep us posted on your rides.

Heh. I love how a camera flash makes the reflectors look like they're atomic powered. You should get Wolfgang to pose in front of it and take a picture with the red eye reduction turned off.

I still can't get used to a bike with pipes on only one side. But on this one it looks good.

I used to hang out on a Suzuki GS forum and there were a lot of fans of the shaft model. (I think it was the GS-650.) Much less to worry about, no power ripple from a loose chain, just goose it and go.

Good choice for most of the reasons you stated. I had a Suzuki Intruder 700 w/ shaft drive and it ran just fine. One thing: the shaft drive can make shifting a bit "jerky", so take your time figuring it out.

750 is a good size for a small cruiser You'll have no problems maintaining highway speed solo. Might run a bit warmer with a passenger, but you should be fine.

Also: radiator cooling is nice when the bike's moving. Standing still, the radiator doesn't do much at all - unless there's a fan behind it (I'd guess that the Shadow has a radiator fan).

You shouldn't have to worry about arfadiator flush until the bike reaches 50k miles. Worry more about changing the oil every 2500 miles - and do that *religiously* (oil gets dirty just from normal operation: change it regularly).

I'd add one thing to your fantasy list: engine guard (sometimes called a "crash bar"). It can protect your leg and prevent damage to the bike in case you happen to tip over when moving it around.

The drive-shaft will make the bike more comfortable but I doubt you will get 50 MPG as drive-shafts are a lot of turning mass. Enjoy the ride.

+1 on the engine bar. One of those saved my engine once.

Burt, there is indeed a small electric fan behind that radiator. I haven't heard it come on, but expect the noise would be drowned out by the pipes.

Yours looks like the Aero, my favorite lines/sculpture of the fenders (my 2005 was red). The smallish fuel tank should not be a worry. My 4 year average ran about 49 mpg with 37 and 56 the extremes based on, um, relative exuberance. This with a standard Hondaline windshield always on.

Engine guard - yes please. The Cobra is well fitted and easy to install.

The pegs are already a good ways forward on this still smallish frame. I had floorboards at those positions, which contributed to better foot comfort but reduced the lean angle a bit - the bike is happy with a deep lean with the stock pegs but would scrape with the boards on. Hard to find a place, or a reason, to put additional pegs even more forward or higher as that begins to resemble a gyno exam position. An engine guard would provide such mount points for pegs, but the place I actually wanted an alternate peg was to the back and more under the seat - again no easy mount point.

I thought the Honda bag systems weak in capacity and weather fitness. Was about to pop for Tsukayu hards with quick release when I sold the bike. The Tsukayus closely follow the shape of the rear fender and come in several sizes. They also make a top case with a built in backrest for the pillion position, and can fit two full face helmets within.

All the rear shelf mounts I've seen are tiny and disclaim usefulness for loads over 5 pounds. If the Tsukayu top case doesn't offer a quick release, there is a Givi that does for sure.

Though I think cleaning the spoke wheels is a chore and the oil drain plug is a little inconvenient to get to, I loved the shaft drive and moderate but adequate cruising of the 750 Shadow Aero. Cried when I sold it and still regret that it is gone.

The biggest downside to drum brakes is that they virtually stop working when wet. Gove yourself more time after riding through a puddle or in the rain and don't be afraid to use your front disc as needed

Check out the Willie-Max bags. I had them on my HD, & most folks didn't believe they WEREN'T leather. Seriously cheaper, too.
Being synthetic, there is little maintenance, & they're mostly waterproof, so you can put beer & ice in them.
That's very important.

The vast majority of your braking power is in your right hand. The rear brake works right up to the point that it locks up. It's not like an automobile where you're trying to whoa a couple of tons. Keep it adjusted with new shoes practice threshold braking and forget about it.

Frame mounted fairings tend to be a bit heavy, so you may want to stiffen the front springs a bit.

Very nice acquisition, Sir. My last experience with a shaft drive bike was a Yamaha, which would lift the rear end off the suspension a bit on exuberant use of the throttle. It was a little disconcerting until I got used to it.

Having ridden more than a few Rebels and Honda midsize bikes, you've picked a winner. Nice and trim, easy and forgiving to maneuver. If I ever decide I'm up to riding again I'd put it on my personal short list. Congratulations!