Ever wonder what more money than sense looks like in action?

In general it seems a good rule of thumb that every foot of pleasure yacht length, deduct 1 IQ point from the owner.  Paul has video of a racing yacht playing chicken with a super tanker.

He also has a story from Newport harbor when he was skipper of a "small" 1000 ton ship and some Upper Class Twit Of The Year wanted to impress his yacht bimbo.

Man, if I had that much money, I could afford some sense.  And some manners. 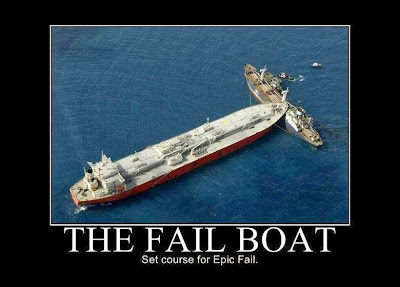 My sea stories are nothing on Paul's, but I got a small taste of this myself when I was in the Coast Guard Auxiliary.  We were doing safety patrol at the Quonset (R.I.) Air Show, keeping a big part of the harbor clear so there would be a place that a plane could do an emergency ditch without landing on 50 anchored pleasure craft.  All afternoon we'd find some new arrival getting a "front row" anchor spot.  We'd scoot on over and tell them they had to move out of the restricted area.

Most of the guys were pretty cool about it, even the ones who thought that alcohol and water made a nifty cocktail.  But one guy on a very nice 60 footer wasn't having any of it, or of us.  Seems we weren't real Coasties, he explained in no uncertain terms to us.

Oooh kaaaay then.  Nope, we were just a bunch of volunteers, trying to help keep everyone safe.  Not Coasties at all.  But we knew the Coasties.  And had a radio (three, actually.  Always carry a spare, and a second spare).

Those 25' RIBs can haul ass.  And Mr. Sixty Footer found himself hauling anchor, and ended up with a very thorough safety examination (don't know if he got written up or not).

Like I said, my Sea Stories are not in the same league as Paul's, but it's really surprising how many people lose all respect for the well being of their hind end once they cast off from the dock.
Posted by Borepatch

Robert Ruark in his delightful coming-of-age book The Old Man and the Boy tells a story of an arrogant yacht owner who was stupid enough to call the Old Man a "son of a bitch," at which point the Old Man (in his 70's at the time) clouted him in the jaw, knocking him into the water. After fishing him out the yacht owner did as the Old Man asked, which was to move his yacht so that it didn't damage other boats it was tied up to.

Highly recommended book, Ted. It's a paean to America as it was in the 1920's.

I was on the damage control party when a 100,000 ton aircraft carrier struck an anchored coal collier.

That same carrier was struck by a wave months later, which caused 3 sailors and 38 missiles to be washed over the side. One of the sailors and all of the missiles were lost at sea.

Here’s the thing, Ted. It’s actually quite easy to make this mistake when you’re a newb and don’t know any better, because those big ships don’t look like they are traveling nearly as fast as they actually are. (This guy had no real excuse, however, other than just being a show-off and getting what was coming to him).

My guess is that tanker was making just under 20-ish knots when the collision occurred. That’s the deceptive part, because the scale of thing makes it look like its going really, really slow. The thing is, most recreational vessels, with the exception of speed boats, won’t make 20 knots, even with following seas and winds. People see these big, ponderous ships and think “my quick little boat will run circles around that thing” when the actual reality is that those big, ponderous ships have a faster cruising speed than their boat’s maximum top speed.

Speed perception on these big ships is such a problem that a lot of the saltwater launches in the Puget Sound and Juan De Fuca/San Juan Island areas that I frequent have warnings about watching out for ferries posted at the launch. The ferries in those areas are big ships, and they travel anywhere from 18 to 25 knots, which, again, is faster than most recreational boats can actually travel, with the exception of speed boats.

Even when you consider speed boats, most of those cruise at 30 to 35 miles per hour, so even they aren’t going a while hell of a lot faster than the ferries are, so guys try to cut across the ferry path, and misjudge all the frigging time. Usually the ferry captains can avert collision, but it doesn’t change the fact that this is a very common problem – you’re crossing the strait, and think you can make it in front of the big ship, and find out the hard way that you were wrong. This is why I almost always re-course to travel behind these big boys whenever it is even remotely close.

I had one sneak up on me in the fog a couple weekends ago while out cruising the San Juans with wifey (it was our tenth wedding anniversary). No real danger, because I have a very fast, very powerful boat, but if I’d been in a sailing vessel, I could see how it could have gotten bad quickly if I hadn’t been able to make a change butt quick. He only closed to within a half mile of me before I changed course and outran him.

Goober- tankers don't have the power to get above 15.5 knots. It's not cost effective to power them like a similar-sized container vessel. That ship was an AFRAmax or small VLCC, a small supertanker, and with a large slow-speed diesel engine, close to shore AND in traffic, it would have been doing 6-11 knots, as those large engines can't be decelerated quickly at sea speed without risking heat-damage to the engine.
I see your point, though. Although I'm leery of MORE regulation of anything, boating is my exception there. Anyone who risks a spouse, friend or passenger's life through negligence or ignorance of the nav rules and good seamanship should not have the privilege of command.

You'd know better than i would. I was basing my estimate off of the GPS speed I got when i was riding the Tswassen to Nanaimo ferry. It said 22 miles per hour.

I probably should have clarified the above with a statement about that being an estimate (especially given that 100% of my maritime experience has been in pleasurecraft - I've never done it for a living like you do) but the point still stands - these things are traveling a buttload faster than most people realize, and most of these pleasure craft can't actually go faster than a tanker can. Sailboats under wind power or even under auxilliary engine power generally can't outrun a tanker's fast cruise speed, and absolutely, positively CANNOT outrun most of the inter-island ferries we have around here.

It's just a matter of perspective - those big things just don't look like they are going very fast due to perspective. But they are.

Also, zero experience around tankers - most of the ship traffic we get in my neck of the woods is small container and naval, both of which haul balls even inshore. I'd be almost certain that those small container ships and naval ships, for certain, are making a speed that i'd have trouble overcoming even in my 21' 400 horsepower jet boat. Like I estimated, I'd think around 20 ish.

I didn't realize that tankers would be slower, but that is a big damn boat, so it makes sense.

Don't have any good sea stories, but I did want to mention how happy I am to find another fan of *The Old Man and the Boy*.

BP! I didn't know you were a semi-Coastie!
Semper Paratus lad.
I was on the Eagle for a while, so that gives me my "sea ration".

Lots of fun, but we didn't go out in the sort of weather you did.

Super Tanker turning radius = about 2 miles.
Put that in a narrow shipping channel with..YIKES...no brakes!
You can be "dead right" exercising your "right of way".
Your estimation of boater IQ is a bit low. It's an exponential downward curve with respect to length.

I doubt very much that sailboat actually had right of way, legally speaking. Deep draft vessels are under special exemption when constrained to channels, which this appears to be.

Also, even if you are in stand on position, which in a normal case this sailboat would have been, you still can't blindly run into someone else and be in the right. You'll share partial responsibility.

It depends on channel conditions whether this guy was in the right at all, bit even if he was, it was only partially in tge right.

Really, logic has always dictated to me when I'm out at sea that I always give way to commercial traffic whether I'm stand on or not. It just makes sense.