Mark emails to point out the following schadenfreudalicious event:

Greenpeace crew members detained in Russian jails for two months over their open-sea protest against Arctic oil drilling are "close to shock" over their conditions, a rights activist said Tuesday.
The 30 detained are being held in pre-trial detention centres in the cities of Murmansk and Apatity, which are nearly 2,000 kilometres (1,250 miles) north of Moscow and above the Arctic Circle.
All but four of the activists are non-Russians from countries including Britain, the United States, Finland and Argentina.
Russia has jailed the activists from Greenpeace's Arctic Sunrise protest ship without charge pending an investigation into alleged piracy, after several scaled a state-owned oil rig on September 18.

While I wouldn't ask for anyone to be thrown into durance vile in Murmansk, there is a whole wing of the Green movement that is all about "direct action".  Earth First! and the Earth Liberation Front immediately spring to mind, with repeated examples of economic terrorism employed for The Cause. The TV show "Whale Wars" showed what can only be described as acts of piracy on the high seas, that would have had His Majesty's fleet hanging the perpetrators from a yardarm a short century ago.

Nowadays, it's far too photogenic for that sort of action.  Except in Russia.


"Many of them are in a state close to shock," she told AFP after visiting the prisoners. "They had never expected that they would face such consequences for their peaceful protest in a democratic state."

Hmmm ... peaceful?  Assaulting a drilling rig in the Arctic Circle?  After all, what could possibly go wrong?  Err, other than the whole thing might explode and sink with all hands into the frigid waters?

There is a reason that piracy laws became internationally recognized.  The reason is that people died before countries cracked down on pirates.  The fact that Greenpeace thinks that they should be allowed to engage in the same sort of acts of hijack for their own political purposes - as opposed to, say, Mohammed Farah Idid - says that the Tragedy Of The Commons is strong in their organization.  Quite frankly, that's very likely why the Russian Government is reacting the way they are. 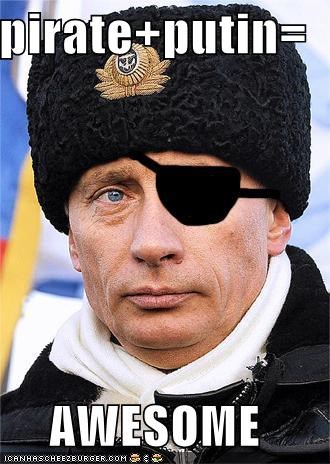 Awesome or not, here's how it's going to play out: the Greenpeace protesters will be tried in Russia for acts of piracy.  They will be convicted, and sentenced to death.  The Russian Government will have "informal" discussions with the leaders of Greenpeace who will pay what amounts to a substantial (perhaps $100M) ransom to have their people freed.  If they don't pay, Putin will act the statesman, commuting the death sentences to 30 years hard labor in Siberia.

And Greenpeace will never again touch anything Russian.  The Pasha of Tripoli could explain to Greenpeace why that was the inevitable outcome.
Posted by Borepatch

Labels: bad idea, duh, idiots, it's not easy being green

That's one of the things I have to respect about Russia, that oderint dum metuant attitude.

Yup. This is a good wakeup call. With the institutional culture of fear imposed on mariners when it comes to boarders, and required weekly, monthly and quarterly anti-terrorism and security drills that are tested, scored and observed by multiple outside agencies, plus a whole sub-industry that exists purely to instill paranoia (while selling security services and oversight)... this is the inevitable result. As I've pointed out in other places, the free pass we give green groups is an ideal vehicle to plant an actual terrorist to get into secure places.

I wouldn't say that Sea Shepherd and the Greenpeace 'direct action' teams are pirates; more like a bunch of hippies playing pirate. That's close enough to bring about the obvious consequences, though.

It's not as if their operations are brilliantly conceived. As nearly as I remember, one of Sea Shepherd's more ... interesting schemes from the early or mid-1990s involved an old Soviet Foxtrot-class submarine that was for sale (cheap) somewhere in the Black Sea region. They were going to buy the thing, put it back in commission, replace a big chunk of the conning tower with a transparent window(!), and follow the whaling fleet around, playing whale distress calls through sonar transducers to scare whales away from the fleet.

Of course there were some, uh, holes in this scheme, and apparently someone with more of a clue persuaded Sea Shepherd that it would constitute spectacular mass suicide. They didn't pursue that plan any further. Somewhere along the line they did pick up a less ambitious sub and were going to try something similar. They got as far as taking this toy to sea on their flagship, but never deployed it. I bet it looked good for the media, though, and I wouldn't put it past them to revisit the general scheme now that they've got a bigger flotilla and their own TV series.

Now, for Greenpeace to poke the bear and not expect to get swatted is almost comically delusional. Just because the Russians have a (nominally) 'democratic state', and could be construed as Northern European if you squinted at them from precisely the correct angle, doesn't mean Russia is a pushover. I'd bet on this playing out just as you're predicting here.

They're victims of their own lousy target selection.

They could have gone after American or British oil rigs where they would have been handled with kid gloves.

But no, they had to poke an oil rig owned by a serious power that doesn't fool around and has no tolerance for their antics.

You'd think they would have learned this back in Protest 101 at Activist University or something.

"You'd think they would have learned this back in Protest 101 at Activist University or something."

Maybe in the 1960s or even the 70s, but you know how education has gone to heck since then. The attitude now seems to be, "they can't touch us because WE'RE RIGHT!"

Actually I'm surprised they didn't just sink the boat and be done with them... They HAVE done that before to pirates...

Vladimir Putin is not Barack Obama. When he says his guys will put you in prison and throw away the keys, he means it.

Pour le encourage l'autre if for no other reason.

I’m no lawyer, but my experience with maritime law is pretty clear that any person boarding a vessel may be considered one of two things:

1. A stowaway, which is treated like a form of trespassing, generally;
2. A pirate, which is treated more or less like attempted murder in most court systems (meaning it carries similar sentencing and punitive consequences);

The way to generally tell these two things apart is intent; i.e., what is the intent of the person who did the boarding?

If the intent is ill or foul at all, then the claim can be made for piracy, pretty clearly.

These Green Peace folks, by their own admission, had bad feelings towards these oil rigs, and boarded them with ill intent; in other words, to disrupt operations of the rigs.

This wasn’t a “peaceful protest.” It was an act of piracy. The Russian workers on board the vessel could have treated this as a “prepare to repel boarders!” incident and shot them on site and wouldn’t have even stood to answer for it, most likely.

As for the “schock” that these deluded saps feel towards their treatment, I don’t know how Russia being a ‘democracy’ (in their words) has anything to do with how they are treating folks who broke their laws. If you break the laws of the United States, they’ll put you in jail – why would they think Russia would be any different?

From my limited experience watching “Whale Wars” it seems to me like these sub-morons think that this is all a big game, and all just a lot of fun and excitement. They really don’t know what it is that they are doing, and what they are risking. I guess these particular individuals are fixing to find out. Hope they like life in the gulag, because I estimate that they are going to spend some time there.

I’ll also note with some satisfaction that there seems to be no ability on the part of Greenpeace to understand how much fossil fuels they are using in their attempts to shut down these oil rigs. The amount of bunker oil that their ships use is astounding, and it never seems to occur to them that they are protesting an industry to which they are contributing heavily.

I might actually listen to them a bit more once they convert all their boats to solar power or something, but until then, they are nothing but hypocrites.