Microsoft has finally confirmed that Xbox fans' worst fears are at least partially true: Although the new Xbox One gaming console won't need an always-on internet connection, that connection had better be on pretty often or you can forget about gaming. And don't assume you'll be able to sell or trade your old games, either.

"With Xbox One, we are planning for a connected future," the Xbox team explained in a blog post on Thursday.


What that means is that while offline gaming is technically possible with the Xbox One – as an earlier leaked memo suggested it would be – it will only actually work as long as the console is able to phone home at least once per day.

And what data is exchanged on that phone home?  The world wonders.


It has been a rough 24 hours for the US National Security Agency. First a leaked court order (and the political reaction) showed that the agency routinely harvests US mobile-use data, and now a new document has been uncovered that claims to show the larger internet companies do the same thing.

A 41-page presentation, given in April this year and obtained by the Washington Post, details the PRISM project, a system described as being the largest single source of information for NSA analytic reports. PRISM apparently gives the NSA access to email, chat logs, any stored data, VoIP traffic, files transfers, social networking data, and the ominously named "Special Projects".

Nine companies are currently part of PRISM. Microsoft was the first firm to sign up on Sept 11, 2007, with Yahoo! coming in the following year, the presentation states. Google and Facebook joined in 2009, the following year YouTube got on board, followed by Skype (before Redmond took it over) and AOL in 2011. 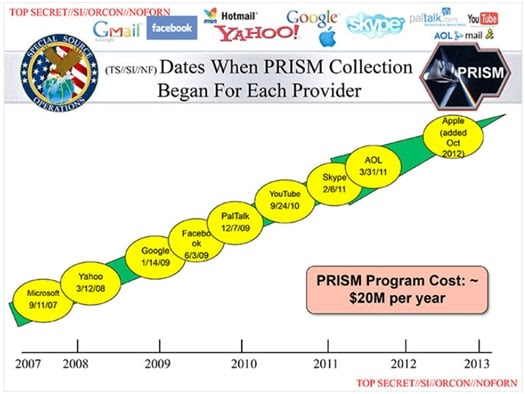 Take a look at that list of corporations: Microsoft, Yahoo!, Google, Facebook.  Now consider the long history of regulatory capture, and ponder what happens when NSA is captured by Silicon Valley.

When a shiver runs up your spine, you will know that you understand me precisely.
Posted by Borepatch

Labels: burn before reading, fascists, Teh Intarwebz, we're so screwed

I guess my biggest suprise was that anyone was suprised at all. Our government has been hungry for power since I came into existance and long prior to that as well. 9/11 was a watershed event that everyone in government used to dig out the steroids and press on with a "full capture" goal. No suprises there at all.

It will only get worse, regardless of who is in the majority. The temptations are simply too strong . . .

They are capturing the entire conversation.

the whole article is interesting, but the quoted portions tell the tale.

"CLEMENTE: "No, there is a way. We certainly have ways in national security investigations to find out exactly what was said in that conversation."

End to end encryption. And even then you're not totally safe.

I've been telling people for years - it's not the government I worry about, it's Google.

Dave H, now Google is in bed with the Government. It's a twofer!

Alan, I'm not so sanguine about e-e crypto. I'm mulling a post about privacy - there are a *lot* of ways this goes sideways.

If Sony plays it smart, MS has just lost the game console market.

I worry about Google, especially when I see all the condition-white hormone-disturbed Googleoids walking around the streets right here in Googlopolis. So we're moving.

I suppose yanking google glasses off peoples heads and stomping them into dust is technically illegal - too bad because that's my initial reaction.

I'm with eiaftinfo on this; I was surprised how many people weren't at least nominally aware of the activities of their government. There's a saying I'm rather fond of: It's not paranoia if they're really out to get you. Well, they really are out to get us, have been for some time and all this hoopla just confirms what I've always suspected and justifies the steps and precautions I've taken over the years.

My SIL is having a complete conniption over the fact that the NSA has been doing this. Which is only being added to by the fact that my hubby works for Verizon (all he does is techsupport, not sure how that makes it his fault, but you know....). I'm still trying to figure out how she didn't figure on them doing so in the first place.

And I totally agree, if Sony plays smart they just won the gaming console war.....

King George the third is laughing in his grave about now.