It is singular how soon we lose the impression of what ceases to be constantly before us.  A year impairs, a luster obliterates.  There is little distinct left without an effort of memory, then indeed the lights are rekindled for a moment - but who can be sure that the Imagination is not the torch-bearer?

It's the Aquarium in Barcelona, Spain.  It's quite good, and having the sharks swim overhead made a big impression on him.  That was a long time ago in a land far away (and by that I don't mean "Spain is far away", but you already knew that). 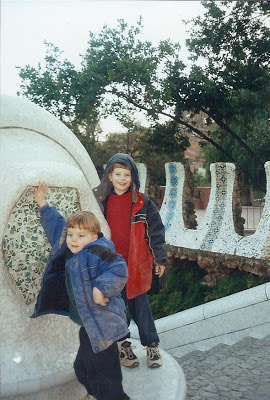 It was impossible to keep #2 Son clean.  Good times, good times.  You hope to add to the stock of those as your children grow, for your sake as much as for theirs.  #1 Son is in College, and soon will be gone.  #2 Son will be a senior in High School next year, and my inner ear can hear the tick tick tick as Tempus Fugit.

And so, to action.  He still has his Learner's Permit, and needs 40 hours of practice to take his driving test.  Today we'll practice in the down town Atlanta city madness.  He needs to get a taste of city driving, and Sunday should reduce the level of crazy.  Besides, we'll end up here:

That's the Atlanta Aquarium.  We've never been there, moving up to Yankeeland before it was open.  He's not 3 any more, but hopefully it will be a fun day not just reliving old memories, but making new ones.

We make many mistakes as parents; children come with no Owner's Manual, and so we stumble through doing as best we can.  This leads to many regrets, memories of things we would have done differently.  That is why capturing a moment of magic every now and then is so important.  Important for your children, to be sure, but even more so for you.

Good thing for both of us that the kids are so resilient.

Making memories... good times. I have to say I'm doing a better job with the grandbaby. At least it feels that way.