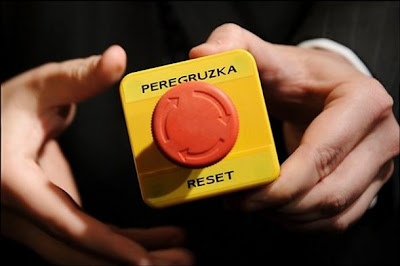 Early in Obama's first term, then Secretary of State Clinton presented the Russians with a token showing that the Cowboys were no longer in charge.  Rather than a foreign policy based on conflict, it was a new era of listening and cooperation.  A "Reset", as their gift so plainly said.

Except that's not what the Russian word meant.  Sure, that's how we translated things - when you translate, you don't want to take a literal meaning, you want to use the colloquial.  An American would press this button when they wanted to reset a system - unfortunately, that's not what a Russian would think.  They would press the button when the system was overloaded.

Analogies are difficult to use, particularly when you are crossing cultures.  Different cultures don't use different words simply because they're perverse.  Steve Martin once had a stand-up comedy routine about the problems of being an American tourist in Paris:


Those French - it's like they have a different word for everything.

Imagine that.  And so we see that Hillary's much vaunted "Reset" diplomacy has borne withered fruit:


The Syrian debacle comes in the aftermath of Obama scrapping in 2009 a missile-defense system the Poles and the Czech Republic had agreed to house despite Russian threats, as a way to pacify Putin. (“The U.S. reversal is likely to please Russia, which had fiercely opposed the plans,” CNN reported at the time.)

Add to that Putin’s support for Iran’s nuclear ambitions and his crackdown at home. (The Washington Post writes that in “an attempt to suppress swelling protests against his rigged reelection and the massively corrupt autocracy he presides over, Mr. Putin has launched what both Russian and Western human rights groups describe as the most intense and pervasive campaign of political repression since the downfall of the Soviet Union.”). Taken all together, you can see that the Obama “reset”–which at the dawn of the Obama administration was described as a “win-win” strategy for both nations–has been a rout for the Russians.

With the Snowden situation, Vladimir Putin seems intent not only defying America but embarrassing her. It turns out that an irresolute amateur like Barack Obama was the best thing that the brutal but determined Putin could have hoped for.

Overload, indeed.  Remember, these were the people who we were told were the smartest kids in class.  So much smarter than Cowboy Bush or - OMG, do I even mention someone as "dumb" as Sarah Palin?  So dumb.  Dumb dumb dumb.  Nothing like as smart as Hillary! or the Lightbringer and their Overload button.

Because Bush and Palin were so dumb that we might have had Russia really screwing us, all over the world.  I can see Russia from my house!

Gee, maybe it would be good if they could see what Russia is doing from the White House, or at least from Foggy Bottom.
Posted by Borepatch

"Smartest Kids In The Class"....yeah, right.

ALL book learning, and NO common sense.

Dumb Cowboy G.W. Bush was a good poker player back in his college days. He might have said nice things about Putin to his face, but he knew what Putin was and is.

The smartest man in the universe isn't as crafty as the dumb Cowboy. Not to mention his only famous because her husband was President SecState. Both have been played over and over like "Walking The Floor" by Putin and other world leaders.

They know a self absorbed chump when they see one.