There's no hiding the decline

2cents emails to point out that Faith is being questioned even in the halls of the New York Times:


The rise in the surface temperature of earth has been markedly slower over the last 15 years than in the 20 years before that. And that lull in warming has occurred even as greenhouse gases have accumulated in the atmosphere at a record pace.

The rise in the surface temperature of earth has been markedly slower over the last 15 years than in the 20 years before that. And that lull in warming has occurred even as greenhouse gases have accumulated in the atmosphere at a record pace. The slowdown is a bit of a mystery to climate scientists.

True, the basic theory that predicts a warming of the planet in response to human emissions does not suggest that warming should be smooth and continuous. To the contrary, in a climate system still dominated by natural variability, there is every reason to think the warming will proceed in fits and starts. But given how much is riding on the scientific forecast, the practitioners of climate science would like to understand exactly what is going on. They admit that they do not, even though some potential mechanisms of the slowdown have been suggested.

This is rank denialism of the worst kind.  Everyone knows that the Science is Settled™.

The whole Catastrophic Anthropogenic Global Warming idea is a wet firecracker without this.  The models all include "forcings" due to this positive feedback from water vapor.  It's all very computer source codeish and everything.  Science!

Err, except science is based not on models, but on experiment and especially experiments that validate earlier experiments.  So is there a way to look at water vapor and temperature?  Well, yeah:


If we pick areas of about the same latitude, we can say they are getting about the same sunshine. What varies is how much water vapor is in the arriving air. IMHO, this gives us an “existence proof” of “water vapor feedback”. Looking more north means less sun, more south more sun; so we would expect a “bit north” compared to a “bit south” to give the bias toward a cooler north and warmer south. (That can be seen on the East Coast as a temperature gradient from Main to Florida)

What happens to the dry air when it has sunshine vs the wet air when it gets sunshine? Which one heats up more?

Even a casual inspection of the map shows that the entire dry desert band, from inland Washington state (they have a bit of desert behind their mountains) all the way on down through Nevada ( nice high desert there) and Utah ( I reached 8000 Ft plus elevation at one point) and on into West Texas (known for Mesquite and BBQ using same ;-) are all quite hot. 84 F to 108 F. Now, if “water vapor feedback” is a positive value, we would expect that areas more south, at lower elevations, with even MORE sunshine, would be even hotter.

I can tell you that for most of today in Orlando, the humidity was 100%. It started off very sunny, and was quite hot at noon. A strong tropical (or near tropical) sun. I was out in it. Observing it. Then it clouded up, and began to rain. The formation of tropical thunderstorms is characteristic of hot summer days. They are welcome as they cause a rapid plunge of temperatures. (As I’m typing this, it’s 11 pm and I’m feeling a bit of ‘chill’ from the cool. I’m on the patio again.) Tomorrow morning will be sunny, and then it will get humid and “hot”, and then the rain will come again. Now look at the map.

The midwest is known for humidity, as is Farm Country. Iowa corn puts a lot of water into the air, and I’ve taken a shower in Iowa only to towel off and still be soaking wet as the humidity condenses. Anyone who has been on the Gulf Coast on a sunny day can tell you that 90 F and 99% humidity is brutal. Now look at that map. The high humidity areas are in the 60 F to 70s F range, getting up to 82 F in the far southern tip of Florida. Looking back to the West Coast, it is hot inland where it is dry, but look at the edge of the water. You can see the low and cold coastal temperatures where the cold air comes in from over the water with humidity in it. Then it warms inland where it is dry.

This is quite an interesting post, which basically is an introduction to how water vapor is a conveyor of heat.  The weakness, as the Climate Science Establishment will point out, is that Greenhouse Gas theory says that warming occurs not on the surface, but at high altitude in the Troposphere.  Localized hot (or cold) regions will be all jumbled up together at high altitude, and the heat will then migrate downwards across the whole globe.


The absorbed energy warms the surface. Simple presentations of the greenhouse effect, such as the idealized greenhouse model, show this heat being lost as thermal radiation. The reality is more complex: the atmosphere near the surface is largely opaque to thermal radiation (with important exceptions for "window" bands), and most heat loss from the surface is by sensible heat and latent heat transport. Radiative energy losses become increasingly important higher in the atmosphere largely because of the decreasing concentration of water vapor, an important greenhouse gas. It is more realistic to think of the greenhouse effect as applying to a "surface" in the mid-troposphere, which is effectively coupled to the surface by a lapse rate.

In other words (they claim), it's Global Warming, not Local Warming.

OK, then.  Here's what it looks like when the goalposts are moved.  A picture is worth a thousand words: 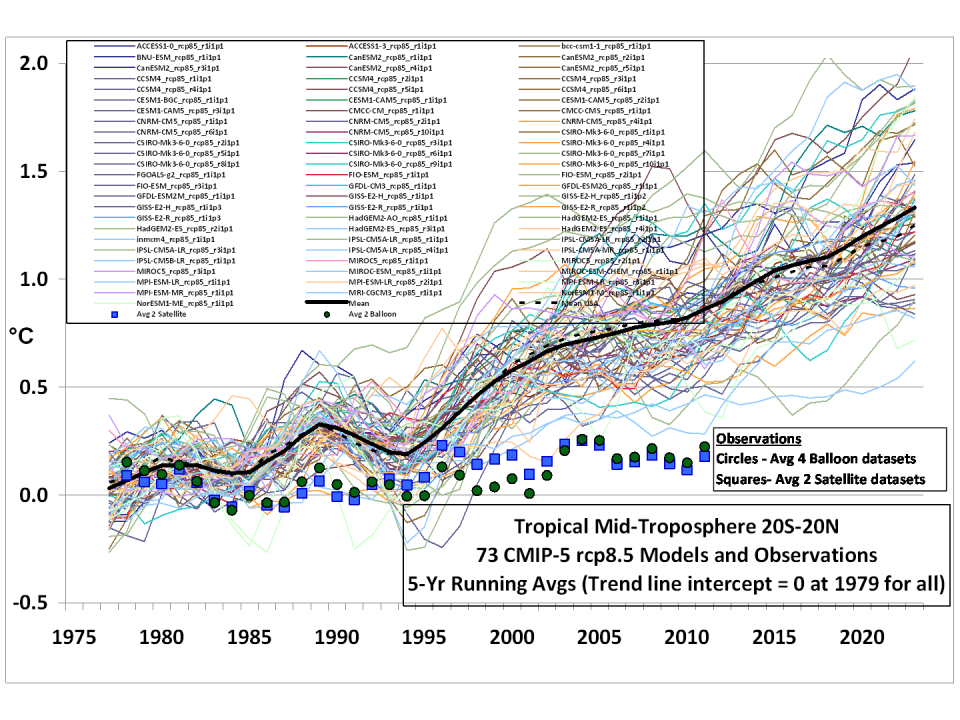 But look at the blue and green dots.  These are the averages of the satellite and the weather balloon data sets, and these are experimental data recordings, not computer model predictions.  Further, the readings were not taken at ground level, but rather in the Troposphere - you know, that place where Global Warming is supposed be hanging with its homies.  Greenhouse Gas theory needs a "hot" spot in the Troposphere to cycle warming back down to the lower atmosphere, because otherwise it will likely just escape to space and in any case won't effect the climate.

So what does the Climate Establishment say to the newly minted deniers at the NYT?  Their picture looks like this: 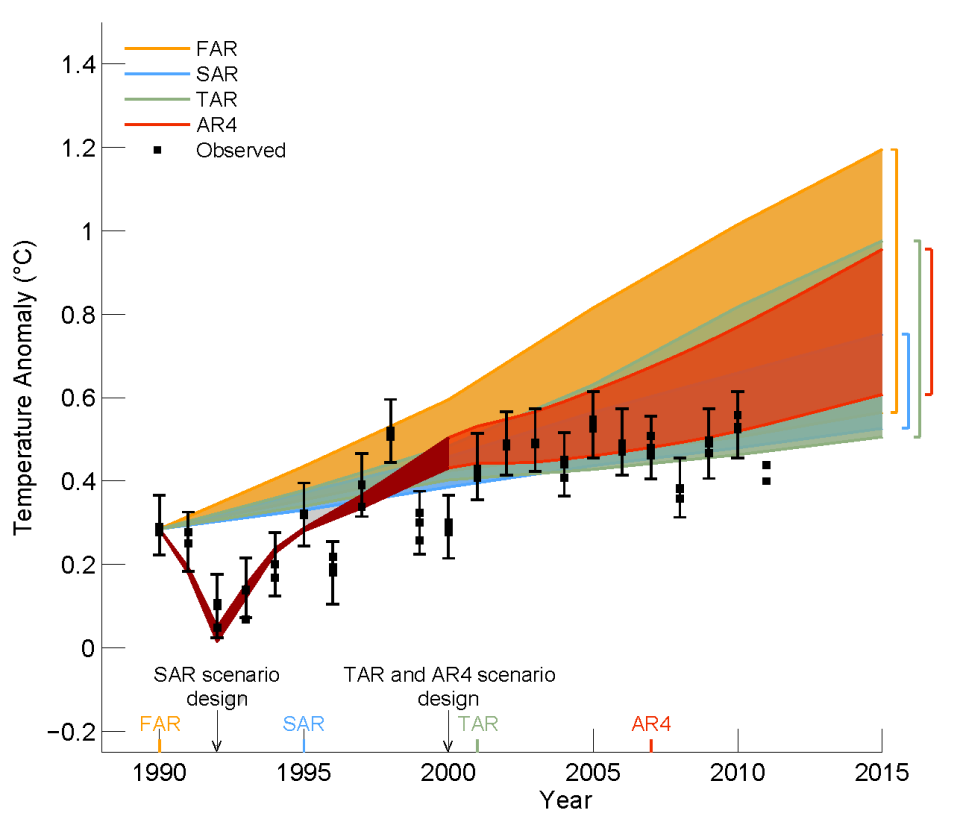 Even they're just hanging on my their fingers, but at least they manage to show that the observed data barely within the model projections.  But if you listen, you hear the sound of the goal posts moving:


The period covered in the [second] graph is a decade shorter than that covered by the Spencer-Christy graph and looks suspiciously like cherry-picking.  By starting their graph in 1990, SS can use the Mt. Pinatubo-induced cold period of 1992-93 to tilt the trend to be more positive. The Spencer-Christy graph begins at the start of the satellite record — 1979 — providing a longer and more representative period.

More importantly, SS uses global surface temperature datasets, which do not accurately represent heat content in the bulk atmosphere. In contrast, Spencer and Christy use temperature data from the tropical troposphere — the place where the models project the strongest, least ambiguous, greenhouse warming signal.

At this point what usually happens is that "rational discourse" breaks out, with accusations of Beastly Denierdom and you're-not-peer-reviewed and the like.  What's interesting is that these "arguments" are not even convincing the New York Times.  It's been quite a rapid change from the monolithic view in the Press to, well, skepticism just in 3 or 4 short years.
Posted by Borepatch

Since the essence of true science is to change your theory when it doesn't fit the observed facts, does that mean these buffoons are no longer true scientists?

Is modeling is not real...

I was laughing my ass off the other day at Al gore's whining about how science isn't cooperating with his theory anymore. Of course it wasn't an opportunity for introspection on his part - oh no, it was just whining about how reality was undermining his reality and taking away the political capital that he once had.