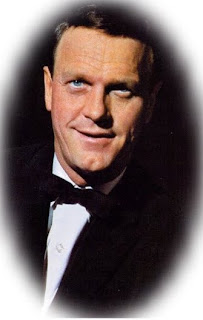 Roy Roger's six shooters are being auctioned, and so cowboys everywhere are sitting up. When you think cowboy music you think of Roy, and Gene Autry, but also Eddy Arnold.

The son of a sharecropper, the "Tennessee Plowboy" dropped out of High School to help on the farm. Good with a guitar and blessed with a good singing voice, he started playing on the radio as a teenager, and was ultimately discovered by Col. Tom Parker, the same manager who discovered Elvis. Arnold "only" sold 85 million records in a career that spanned over sixty years.

His sound was a "pure" country one until the 1950s, when the newfangled Rock 'n Roll cut into sales. With Jim Reeves, Arnold reworked his sound to appeal to a wider audience. The resulting "Nashville Sound" was the precursor of Patsy Cline's "Countrypolitan".

It was pretty controversial - some folks didn't think it was "real country". But it sure sold records. His 1965 "Make the World Go Away" was an international hit.

Cattle Call is from the early days, with a purer country sound. Something that Roy certainly knew.

The cattle are prowlin',
The coyotes are howlin'
Way out where the doggies roam
Where spurs are a jinglin'
And the cowboy is singing
His lonesome cattle call

The Nashville Sound was very different indeed. Here's Eddy with Dean Martin in 1965:

Pretty fun, although not particularly country. Eddy Arnold died only a couple years ago, two months after the death of his wife of 66 years. Quite a run there, too.
Posted by Borepatch

One of my earliest musical memories is listening to my Mom playing records on our old Zenith console. Thing was almost as big as our couch :) Eddie Arnold was one of her favorites in the rotation.

While we're on the topic of Country Music, tell the Lovely Mrs. Borepatch that Blake says "Hey!". My Mrs. and I caught his show at the Indian Casino up in Oklahoma last night. Awesome :)

Oh, I haven't heard this song in years. At one time it was in fairly regular rotation on KKYX, but sadly they've moved mostly into stuff from the '70s now. Glad to say I grew up listening to it, though.

A long time favorite of mine. He had one of the best voices in country music, in my opinion.

My Mom's favorite singer... made my Dad a bit jealous ;)

Eddy Arnold was the coolest and the smoothest...thanks for posting this!

@Rock The Jukebox, he sure was.