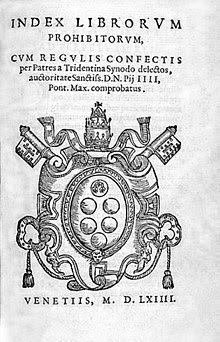 The Index Liborum Prohibitorum was the Catholic Church's list of banned books. Between 1559 and 1966, it contained the titles of every book that contained immoral or heretical ideas, which all Right Thinking Catholics were to shun. The list was influential in the sixteenth century, but mostly influenced the decline of science in southern Europe as the early scientific clubs of Rome and Florence were unable to read all the works available to the new clubs of Paris and London.

Southern Europe has never recovered, scientifically speaking. While the list was effective in enforcing social control by the existing power elites, as far as promoting the advancement of knowledge it was a self inflicted bullet in the foot.

Fortunately, we're so much wiser today ...

An astonishing paper has just been published in the Proceedings of the National Academy of Sciences, the premier journal of the premier American Science organization. It's a list. Of climate skeptics.

Of course, it's nothing so vulgar as a simple list of who to ignore. It's slightly - but only slightly - more subtle than that:

The analysis of climate scientists claims the "vast majority" of climate change researchers agree on the issue, and that those who oppose the consensus are "not actually climate researchers or not very productive researchers".

So skeptics are lousy scientists, right? Not so fast:

Opponents said that the paper divided scientists into artificial groups and did not consider a balanced spectrum of scientists.

They also pointed out that climate sceptics often struggled to get their papers accepted by journals, as they must first be reviewed and approved by climate change "believers".

Judith Curry, a climate expert at the Georgia Institute of Technology – who was not part of the analysis – called the study "completely unconvincing" while John Christy of University of Alabama claimed he and other climate sceptics included in the survey were simply "being blacklisted" by colleagues.

Most hilarious is the response from Roger Pielke, Jr, concerning the scientific credentials of his father, who was surprised to find himself on the list of skeptics:

Back to the world's most accomplished "climate skeptic." That would be my father who not only tops the black list but also would be near the top of the list of acceptable scientists based on his credentials, had he been placed there. What sort of views does my father hold that would qualify him to lead the "climate skeptics" list?

I was copied on his reply to a reporter today and can quote from that. He provides this rather ambiguous statement:

I am not a "climate skeptic".

Note to Dad, there is no better evidence of your denier credentials than denying that you are a denier.

So just how degenerate is the "Climate Science" community? So much so that the flagship publication of the premier American scientific organization is discussing not scientific arguments, but credentials and opinions. And offering guidance to keep the weak-minded safe from the temptations of heretical views.

The Index killed southern European science, by proscribing views dangerous to the Faith. The National Academy of Sciences is heading down the exact same path. Sic transit Gloria Mundi.
Posted by Borepatch

It's quite clear what needs to be done. You and the rest of the convicted deniers need to be given over to the Inquisitors and the auto de fé.

They blinded me with SCIENCE!

Ted, I never get tired of reading your posts. Keep up the great work... someday your site too will be banished ;)

ASM826, my plan is to stock up on ammo and whiskey.

Bluesun, there sure were a lot of great songs then.

Fascinating connection. Another connection is that "Global Warming" is in fact a religion. Consider: It gives us an "original sin", of which we're all guilty. It gives us a way to do penance for this sin: giving tons of money to organizations who will spend it wisely. It gives us indulgences, in the form of "carbon offsets" - buy some offsets and your carbon-polluting sins can be forgiven.

It gives us high priests: His Holiness Al Gore, First Cardinal James Hansen, and others, who bring us the word and the gospel. It gives us the heretics: Bjorn Lomborg the most prominent, and others who must be "burned at the stake" by having their books banned, their Journal articles dismissed by peer review.

ZZMike, your comment is so excellent, it's in danger of collapsing into a Black Hole of Excellence.