Then Arthur fought against them in those days with the kings of the Britons, and it was he who led their battles.
- Nennius, History of Britain 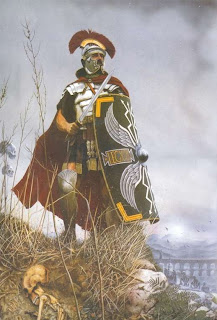 The governor of the U.S. state of Arizona met with President Obama at the White House on Thursday, to discuss the controversial law due to go into effect next month aimed at illegal immigrants.

So who played Odovacer, and who played Romulus Augustulus? In five years who will play each part? Who is on a part of Fortuna's wheel that's going upwards, and who's on part that's going downwards? I'm optimistic because I don't need people to agree intellectually with me; all we need is for State politicians to realize that the Federal Progressive agenda is moribund and that there are votes to be gained by running against an incompetent, arrogant, and intellectually bankrupt center. But we have to get out and vote, to reward this sort of decentralizing effort and punish business as usual. That's why it's so critical to vote incumbents out. Voltaire said it a quarter millennium ago: Dans ce pays-ci, il est bon de tuer de temps en temps un amiral pour encourager les autres. In this country, it is wise to kill an admiral from time to time to encourage the others. Replace "kill" with "vote out" and "admiral" with "Senator", and you've got the words, and the music. The Elites hate this, and are increasingly deranged in their protests. They see a new Dark Ages. The Dinosaurs smell a change in the air, and roar their defiance.
Posted by Borepatch

That is an awful lot of smart to absorb this early in the morning. Needless to say, I look forward to reading this one again in more detail.

We certainly do live in interesting times, don't we :) I really enjoyed reading this.

Well, wasn't that all intellectual? And optimistic, too. I agree with your assessments of the situation, but I think we have slipped so far toward the water at the bottom of the bowl that voting in new, more conservative leaders will only slow the process, not reverse it.

Probably too intellectual, too. ;-)

With most of this I have no quarrel. Not even with the optimism, which I really, devoutly hope will prove correct rather than the cynicism which I usually feel, and which drives many of my political comments here and elsewhere.

This, however, caught my eye:

Art is a wasteland, whether you look at film, or literature, poetry, or painting. Only music retains a dynamism, and only because it appeals not to the elites, but to the masses. Compare and contrast: modern orchestral music vs. Rock and Roll.

First, on literature: there's at least one substrain of literature that retains some energy: speculative fiction, which term encompasses SF, fantasy, and the recent spinoff genre of "alternate history fiction" a la Turtledove and Stirling.

Second, on music: there's at least one genre of music that manages to appeal to both the Elites and the Masses: movie and TV soundtracks. There's some damn good composers writing movie music, and some damn good music coming from their pens. John Williams is one example; James Horner is another. There's also a guy named Christopher Franke, who wrote some wonderful stuff for Babylon 5. And many others.

The question is, have people suckled at the teat too long?

The Siamese twin of Progressivism in America is Populism; the mantra of "Gimme" isn't only chanted in housing projects and college campuses, but on farms and factory floors across America. The idea that somebody else's money is up for votes dies hard.

Thoroughly enjoyable post and, despite enjoying the odd bout of Catullus and the few historians that have come down to us from late antiquity, think you're on target.

Here in the Missions the people mutter angrily about leaving the Union... who can blame them?

"Liberal" always fails. "Stomp yo ass" wins most all of the time.

I find myself optimistic as well BP. I believe there are still enough hard working, tax paying middle class Americans out there to make a political revolution not only possible but inevitable.

I got to the end of this and said "Wow". Then I wondered to myself why you aren't on my daily reads.

That was a mighty fine post there Mr. Borepatch of long winded repartee'. Stan spits some tobacco juice your way. lol...

Unfortunately I agree voting the SOB's out is a fine, dandy, and rational proposition, but when they "elitist clowns" are only replaced by other puppet elites you run into the same corruption and incompetence debacle we continually face today.

If you would like to look at a microcosm of how this plays out; you would need to look no further than that not so Golden state of progressive California where you have a billionaire punching it out in a nasty "who's more liberal" campaign against another 100+ millionaire just the right to go up against Jerry "past liberal government failure" Ronstadt really old guard Establishment Brown.

So you in all reality when you vote one termed out fraud, you just get the next elitist walking up to take the throne.

Though there is little doubt we as a society are on a direct collision course with the darker side of history.

The Old Guard as with Napoleon's, will not surrender, and thus the people will be only left with the more definite and permanent course of action.

As with all things coined "To Big To Fail", History has taught us the valuable lesson that they are in actuality "To Big Not To Fail".

No government that has lost it's moral compass and ethical soul can survive the on slot of the angry suffering masses in the end.

So bring on the barbarians, and where the heck do I sign up for duty. lol....

I'm not quite sure at this juncture if that makes me a pessimist, an optimist, or just a plain old pillaging opportunist?

Stan, it was WAY too long winded. I didn't have time to trim it down.

I do think that there's political hay to be made in ripping the guts out of the system, but it will take a new generation of politicians who can bypass the K-Street money guys and go directly to the voters via new media.

Sarah Palin is actually blazing the trail here. With a budget of basically zero, she's able to drive the national agenda ("Death Panels") via Facebook. It will be very interesting to see what this develops into.

But it's new form will own nothing to the existing Old Guard.

Regarding Arthur, this may interest you:

As for music, I advise you to stop and actually LISTEN to the words in modern music, and consider the meaning. It is as empty of sense and significance as nearly anything else in the modern world. Country music and inner city rap are equally vapid.

As to music, there's good and bad, deep and shallow. Country music in particular is something that I post about weekly.