From the place that Great Britain used to be

What a sad, degenerate state for a once proud people. Via The Drawn Cutlass, we find police who can only be described by the word "cowards":

Three students were hailed as heroes last night after rescuing a drowning woman - as police stood by and watched.

Graham McGrath, Rosie Lucey and Rhys Black were walking beside the Albert Bridge in Glasgow when they saw the 37-year-old in the River Clyde, shouting for help.

Mr McGrath and Miss Lucey jumped in and pulled her to the bank. Mr Black then waded in and dragged all three ashore.

Well done, lads (and lass). But where, you might wonder were the police? And what were they doing?

But as the courageous trio performed the dramatic rescue, Strathclyde Police officers held back worried onlookers on Glasgow's Albert bridge.

A Strathclyde Police spokesman said: 'It is not the responsibility of the police to go into the water - it's the fire and rescue service.'

That's not my department. We're sorry, you're not allowed to drown unless you've filed form GB27-XYV-1731 (2006 edition; older editions no longer valid). And make sure that it's been on file for 30 days so that the proper authorities will have time to review it.

And why do the authorities need so long to review it? They're terribly busy saving the Realm from the scourge of cheese sandwiches:

A toddler at a playgroup near Manchester had the cheese sandwich from his lunchbox confiscated by deranged teachers because it did not accord with their “healthy eating guidelines”. The child, Jack Ormisher, was offered fruit, nuts, seeds etc by the teachers as compensation.

If he was older he might have had the wherewithal to shout back at them: “Do I look like a bloody chaffinch, you self-important, doctrinaire, Stalinist harridans?” But he didn’t, because he was only two years old, so he just cried his eyes out instead. What can we do about these people?

So Britain is run by a lot of statist bastards who are pleased to make 2 year olds cry and 37 year olds drown. Rudyard Kipling would have kicked your sad and contemptible asses. 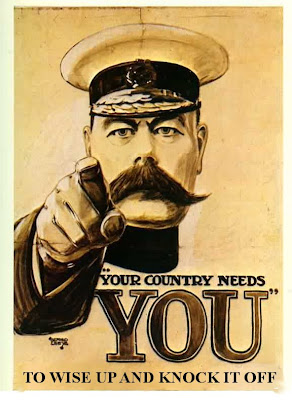 Note to US lefties: you keep saying we need to be more like Europe. I don't think you're paying attention.
Posted by Borepatch

And speaking of US lefties, did you hear about Bloomberg going over there to review London's police state surveillance techniques? It made me scream inside.

Those forms are kept in a locked closet in a disused lavatory with a sign on the door that reads "Beware of the Leopard".

Perhaps the change in government with the last election will allow for an outbreak of common sense. I'm not holding my breath, but I'd be glad to see it happen.

And people wonder why I have no interest in going to Europe.

reflectoscope, I doubt it. See Stoaty Weasel's take on the election.

If the policemen had disregarded their "this is my job, that is their job" mentality and jumped in, I bet they'd have been ripped up one side and down the other by their [union-style] management. If not fired.

Sounds like the British Police have turned into mall ninjas.

Lissa, the officers involved probably hadn't had their lifesaving classes which would have put them in violation of their 'Elth 'n Safety monitors.