I've wanted one of these for years, and so I up and ordered one from the Civilian Marksmanship Program.  CMP is an interesting program: it is chartered by Congress to provide DoD surplus rifles to the American public.  They get rifles from DoD (these days there are not a lot coming back from overseas Allies; I think mine may have come back from South Korea but that's just a guess).  CMP armorers refurbish the rifles so you are guaranteed to get a functioning weapon.  Pricing is good (I paid $750 and it came with a nice hard case and free shipping), but what they have is what they have.  Mine is a Springfield Armory Service Grade model (which means that it has some wear) manufactured in October 1943; personally I think that the dings in the stock add to its charm. 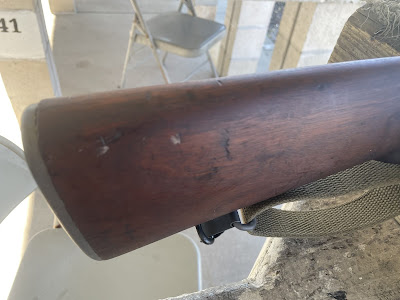 It does have a rather mysterious stamping that I haven't had time to research yet.  If any readers have any hints I'd be mighty obliged. 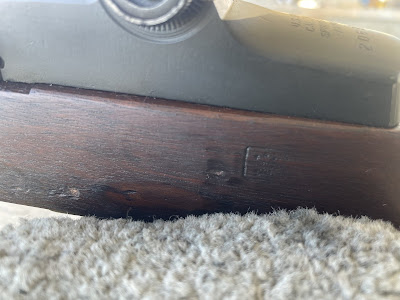 Now this isn't really a range report about the rifle - I posted one quite some time ago and so will just point you to it if you're interested.  Today is about how I sighted it in.  You see, after the armorer is done you have a fully functional rifle; you may or may not have a rifle that hits where you aim - at least out of the box.  You need to zero the rifle yourself, and that's what yesterday was about.

Now unless you have your own private range, you need some sort of spotting scope to look at your target after you fire a shot.  If you're at a public range (as I was) you can't just traipse downrange to get a closer look at your target when the range is hot.  Besides, it's a hundred yards away so that would be a lot of walking.  A scope (or binoculars) is better. 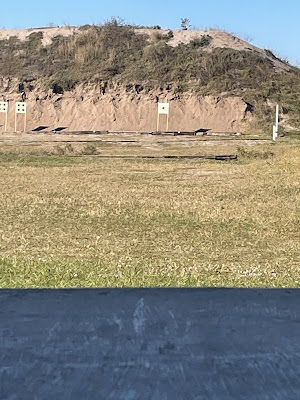 The M1 has a pair of knobs that move the rear sight either right or left (windage) or up and down (elevation).  You can see the knobs on the picture below, one on each side of the peep sight. 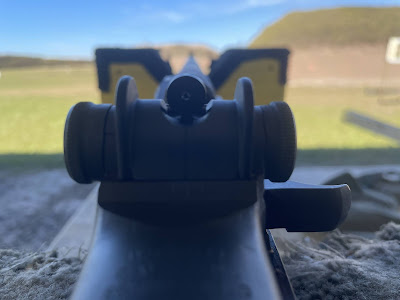 Here's a top view.  The sights and knobs are right behind the open internal magazine. 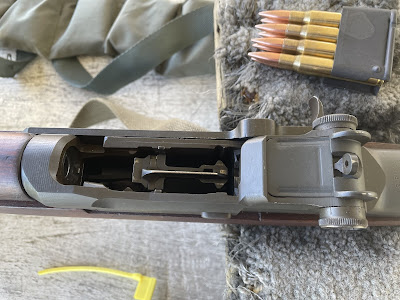 Now I was a dummy yesterday and left the manual of arms booklet at home and so it was a 50/50 coin toss as to whether I was adjusting windage to make the zero closer to the bullseye or further away.  I guessed wrong, and saw the next couple holes appearing further to the right from the X ring.  Sigh.  OK, dial back the other way.  All in all I fired 12 rounds to get windage right, correcting between each shot.  Then I scrounged some Shoot-n-See dots to cover the holes and put two clips down range. 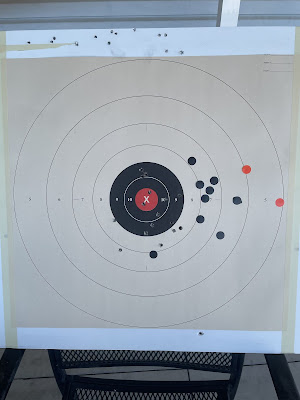 Interestingly, even though I was shooting from a bench rest, I used a shooting sling for the second clip which tightened the grouping up noticeably.  Almost everything went into the red or black when using the sling, as opposed to a bunch in the 8 and 7 rings without the sling.  I'll leave a discussion of shooting slings for another day.
So there's no magic to sighting in, just a careful and deliberate shoot-check-correct-repeat process.  Now I need to get out regularly at 200 yards - and then 300.  Then a Garand Match, which they run at my club.
Posted by Borepatch

Good shootin' Tex.
That is an excellent price for that rifle. I bought one of the the Special Grade ones with a new barrel and stock a few years ago. About $1050, I think.
Not sure if I can see 200 or 300 yards well enough to hit anything, but it could be fun trying.
Went shooting shotgun yesterday with my "new" Browning A5 (only 56 years old). New to me anyway.
Your rifle would have some stories if it could talk- it is only 78 years old. The CMP is a great institution, I am glad you were able to get your Garand.

Interestingly, the Browning A5 is also on that list of guns I'd love to have.

That is an acceptance stamp from the US Govt

Technically, you fire a group of three, then move the locus of the group. Lather, rinse, repeat.
You can do single shots, as you obviously did, but three rounds between adjustments tends to soak up the sum of operator errors, and self-round the result. Potayto, potahto.

And as a rule, the Garand gets zeroed on a target at 25m /1000 inches, which puts you minute of enemy from 0-400 yards, and gives you a 200 yard BZO. Later this was changed to 300Y, on the theory most times you couldn't see or engage anything farther than that, on average.

It probably would have been a good idea to mechanically zero your sights first too, i.e. take the sight all the way to one side, count clicks to the other side, and then go back half. (It should be 32 clicks total, half that to the middle from either side), and centering the elevation at 36 out of 72 clicks as well. As you did, you can just plug-and-play, but it wouldn't be a bad idea to figure out where your zero is from the reference of actual mechanical zero, for repeatability, and then see where your zero is at successive ranges, in case someone moves your sights, or you clean them and forget or wipe out your correct settings.

In case either of these aren't on your shelf:

Two in the red "X"-ring on sight-in, and most of the rest in the black is just fine for 100Y. Now drop back and repeat, for all range marks to say, 500Y/m, and only then do a Garand Match, and you'll only be shooting against yourself after that, to master the weapon.

At any rate, getting the equivalent of 100Y headshots within a box is better than 90% of shooters most days.

The other 10% are the guys trying to keep them all in the X-ring.

Don't forget to practice your Rittenhouse Drill: Two in the skateboard, and one in the elbow.

For the Garand, that's roughly 1" per 100Y, for both windage and elevation. I didn't bother to consult the NM or aficionado blogs, but the Army cared so little about passing that info on to the average soldier, let alone training him to make practical use of it, they buried that information so deep in training literature you'd need a miner's helmet to find it.

(The old - 1957 - FM 23-71 gave it as 2 cm per 75m, which information in 1957 was just about the most useless bit of info conveyed by any military manual in US history, on par with making a speedometer in furlongs per fortnight, or an aircraft altimeter that used rods and chains.)

It is a government acceptance mark. And yes, always three round groups. Otherwise you could be adjusting on a 'flyer' not the actual impact point. Windage first, then elevation is what I was taught.

M14 zero, same sight setup as the Garand, called for setting windage and elevation at mid-point. Group of three rounds, adjust, three rounds and etc. The M1 Garand is the most accurate rifle I have ever fired, always returns to point of aim. My oldest has two. The best shot group I got with an M14 was three covered by a range sergeant's cigarette filter. With a Garand, I got a horizontal string of six overlapped. Don't know what happened to the other two rounds.

I thought your CMP sorted them out into grades? Are M1’s as brutal on their brass as M14s?

You will love it, I have a "Winchester" Garand...Or I did until that durn kayak accident..*Sniff*Sniff*. Remember to only use 150 grain bullets, anything hotter can damage the oprod. I would get my ammo from Academy, the Monarch brand worked really well. But lately it has been hard to find any 30-06 in the proper grain. The Garand shoots really well and is fun to shoot, and you have a piece of history.

Someday I will find enough .30-06 to shoot my CMP Garand again...someday.