I originally posted this eight years ago, but it bears repeating again. 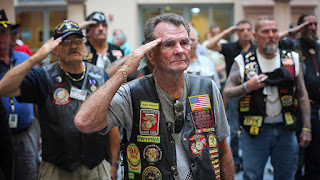 The citizens of the United States have a different relationship with the Military than many countries do.  The Military is seen as being part of the citizenry (and actually vice versa, as a reading of the Second Amendment will show).  In many countries the military is seen as separate and distinct from the populace.This isn't unique - the same dynamic has long been in play certainly in the Anglosphere, and other nations as well (c.f. Switzerland).  This has resulted in the Military being seen as high status, and commanding broad respect through society.

And so in the United States, today is the celebration of Veteran's Day.  The rest of the Anglosphere (and other places) hold today as Remembrance Day or Armistice Day, recalling the Millions slaughtered in the Great War which ended 95 years ago today.  America does not need a Remembrance Day, as we have our own Memorial Day holiday (an outgrowth of the American War of Southern Independence a half century earlier than the War To End All Wars).As a result, there's less sadness here.  On these shores, today is a day for the living, not for the dead.  We see signs at small restaurants saying "Veterans Eat Free", which would be difficult for those asleep in Flanders' Fields.But even here it's worth a moment's reflection on the War where Europe committed suicide, when a whole generation was butchered and damned.  And how they nearly took us with her, then and 20 years later.  It's rarely the politicians who caused the problem who bleed.

Thanks to all who served, including Grandpa, Dad, Uncle Dick, nephew Daniel, The Queen Of The World's son, our Son-In-Law (now back from deployment), and last but by no means least our very own ASM826.  The citizens - of whom you were once part and to which you returned - are grateful indeed that this nation does not fear its own Armed Forces.

I just got back from making the rounds to some of the town's cemeteries, placing both memorial flower baskets on graves and memorials, as well as wreaths on the cemetery gates. The oldest cemetery was had graves starting in about 1714, with veteran graves from the Revolutionary War. The next one I briefly walked through had veteran graves from the Civil War. The other one dates from the 1800's but is still in use today. Another group took care of the other cemeteries.

Thank you for remembering!

It is enough for me that I earned the right to wear the uniform. I wasn't a great Marine, but I served with great Marines.