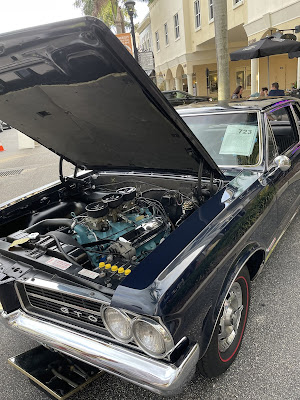 1964 GTO.  What caught me was the three carbs on the 389 V8.  The owner basically took it down to bare metal and built it back up again, and he did a nice job.

This is the car that started the Muscle craze.  Basically, John DeLorean took their second gen Tempest chassis and dropped a big block Bonneville engine into it.  Pontiac initially planned a production run of 5000; they actually sold 32000.

That is one they need to resurrect - along with the Judge engine...

I had a 1963 Tempest Station wagon and a friend had a '63 GTO that had been rear ended. I bought the car from him and placed it's engine and tranny in my SW and placed all the Goat badges on it as well as the floor shift and bucket seats... It turned a lot of heads, it didn't have the 389 V8 with the tri-dueces in it but it was a big block. The bodies were identical except for the trunk... I use to tell people it was a "concept" grocery getter.

Little GTO
You're really lookin' fine
Three deuces and a four-speed
On a three eighty-nine
Listen to her tackin' out now
Listen to her whine
C'mon and turn it on, wind it up
Blow it out, GTO

Had a bud, years ago, who had a ‘69 GTO, tri-power set up & all. Nice machine, but it fell into the ‘no maintenance’ black hole. AND, he refused to sell it. It killed me to watch it rot away…

As I recall, Pontiac was the first - that is a 64 GTO in the picture - then Chevy in 1966 with the SS396 then Oldsmobile then Buick later. I think that was the order as the muscle car genre was born.

I will have to get my high school yearbook out as we had a picture of the cool guys with their muscle cars. ( I, of course, was not in that picture!)

Libertyman, you're right; the Goat beat the 442 by a year. I guess my mother forgot to tell me that part. Thanks for the correction.

Hey 'Patch ...
Here's quite the coincidence ... few days ago I stumbled upon a channel called "Hagerty" ... and his time lapse video on a 389 TriPower rebuild. I watched it at 3/4 speed.
Here you go
https://www.youtube.com/watch?v=dpEzczHlmBQ

Get Updated with whats going around with The Blog 101.

DeadDad had and fully restored the first year 1962 Pontiac Grande Prix... I blegged aboot it a waaay back. 3 feet longer than a B-Body Modren Station wagon, and was a two door... 389 Tri-Power, which only went on for car shows, otherwise we used to swap out for a standard 4bbl. The 3X2? Gallons per mile man.... good memories and times.

I had a 66 Goat, Tri-power, no air, no power steering. Won a lot of races with that car. Didn't stop worth a damn though... LOL

High school buddy had a '65 GTO. 4spd, 389 tri-power. Supposedly box stock, as it held the NHRA record for it's class. IIRC, A second quicker than the prior record holder. Tear-down showed it met all specs. The only mod we found was the linkage for the secondary carbs was soldered or brazed closed, so those carbs opened sooner than normal. He bought it from the racer as it was in '69. Drove it for a year or so, and then traded it in on a new 350 Nova. Offered it to me for $1100, but I had too many cars, and couldn't sell anything quick enough.

That car just stomped all over any 4bbl GTO he ran against. Philly area.