Friend of the Blog Tacitus wrote about his experiences last year as a newbie deer hunter.  He has some thoughts to share with us on getting ready for his second hunting year, as well as some questions for experienced hunters.

Loyal readers out in Borepatch Nation may recall that in November of 2020 I took up deer hunting for the first time. I had a great time and did manage to put venison in the freezer through that mixture of perseverance and luck that often passes for skill.

After that I queried the assembled scholars here about what rifle I should buy, replacing a borrowed 30-06 that I considered a bit too much artillery for the purpose. Finally, after much discussion I used one of my Covid Economy Stimulus checks to go out and buy a Ruger American in 6.5 Creedmoor. Of course this and any possible alternative decision will always generate controversy but too bad. I made the final call based on the recommendation of one of my longest time friends, a gentleman of solid principles and progressive politics who is way more 2nd Amendment than I am. Sadly he passed away last month, so if I don’t get a deer I’m blaming him.

Anyways, I plinked away with target practice on and off, using whatever ammo happened to briefly turn up on store shelves. I’m honestly not all that adept at sighting in the scope, seems like every time I fiddle with the settings I make things worse in some unexpected direction.

But finally I had some time, an improvised sighting in bench, and several types of ammo. With hunting season starting the Saturday before Thanksgiving it is time for decisions.

Here’s my quite realistic deer target with detachable “bullseye” over the ideal location. I had it set at 80 yards, realistic where we hunt. By this point I had three types of ammo in hand. A Nosler 120 grain, a Nosler 142, and a Hornady American White Tail in 129. Time to decide which I’ll be using.
I’d had good luck with the heavier Nosler last time out, but oddly the lighter ammo including the cheapest of the lot, the Hornady, were looking more promising on this bright fall day. 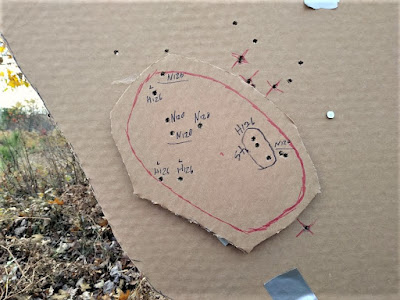 The higher up hits came before I adjusted the scope, this time actually doing some good. The next 12 shots were in what I consider a humane target zone. The ones marked with L indicate I was moving my aim point slightly to the left. At this point I was disinclined to mess with it further.
When I took the target down and looked at the back I realized that even most of the misses – and this was from both my son and I over several sessions - would in general have taken down the deer cleanly. 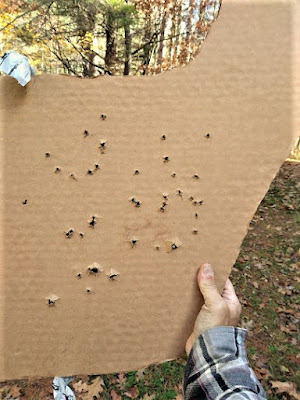 At this point there is little more I can do to get ready. I’ve put about 100 rounds down range since buying the rifle and I’m way more comfortable with handling a gun than I was a year ago. The lighter gun and the increased confidence should allow me to get a shot off a second or two earlier, something that would have served me well last year.
Should I try again to zero the rifle? Not unless I run across another stash of 6.5 for sale somewhere. Honestly at this point my accuracy will be more influenced by grip, steady trigger pull, and getting a rest rail kludged onto the front of my tree stand.
Wish me luck, and thanks again for the advice. I learned a lot from it.
Tacitus
Posted by Borepatch

Just remember when you change the weight of the projectile your point of impact will move. Always sight your weapon with ammo you will be using. Even different ammo with same weight can move your impact. 20 grains at 100 can be quite change on the range, more when you misjudge the distance to the deer.

Unknown.
That's mostly why I did the head to head comparison. I figured there would be a difference just was surprised by how much. Of course it comes down to availability. The 126 seems to be the easiest to find in these parts. I have enough left for one more round of practice perhaps with targets at 50/75/100. I should know the spots I'm hunting well enough to get the range close enough. Thanks
Tacitus

I would recommend you clean the rifle well, and go back with whatever round you choose. Fire a cold bore shot, then three shots 10 or so minutes apart to see what grouping you get. Use a target something like this at 100 yards. https://www.brownells.com/shooting-accessories/targets-accessories/paper-targets/precision-sight-in-targets-100-pack-sku750190034-20847-26081.aspx

IF it is close to your point of aim (within 1/2 inch), leave it alone. When you get to camp, fire one round to check that the rifle is still zeroed.

Plus be prepared for "buck fever" which is an adrenaline rush, I think. That could change everything. I experienced it bow hunting one year,many moons ago, but not since.
Good luck and good hunting.

Modern rifles are surprisingly accurate, and you can probably finish sighting in one shot at a time, cleaning and letting it cool between shots. I use bags of of cat litter for steadiness. Part of my sighting in instructions: Think in Inches, Minutes, Clicks for sighting in. You must know the distance from your scope to the target. One inch at 100 yards is very close to One Minute Of Angle. One inch at 25 yards = 4 Minutes of Angle. One inch at 50 feet = 6 Minutes of Angle. If your shot lands on paper do the measurements from your point of aim. Convert that to Minutes of Angle for both windage and elevation. Convert that to the number of clicks on your scope turrets. Red dots are often 1 Minute clicks. Other scopes may be 1, 1/2, or 1/4 minute clicks. Shoot carefully and let your gun cool between shots and you can sight in with very few shots. If you don't have sandbags, take a couple bags of cat litter (NEW CAT LITTER!) to make a steady rest. Math makes the process easy so you aren't chasing holes on your target.

“Which calibre is best for deer?” Is a fool’s argument. The 6.5 Creed was all the rage with the cool kids and may still be - you are off to a great start. Any reasonable calibre will do. Don’t throw away your brass. By a reloader and learn how to use it.

That deer target is great! I used one when I started too. We put pulleys on ours, stretched a cable cross the range and our deer would “run” across it at 125 yards. I was shocked at how proficient and accurate I got on moving targets. You are on track for a world of fun. Get the kids involved too.

Glen its actually the kids who finally got me out into the woods. The grandkids are a few years off. Appreciate all the advice above. I do recommend a target that is realistic in size and color. From my experiences last year I can say that pattern recognition is important. If you can shave a couple of seconds off the time it takes to line up a shot you might catch the deer standing still. I'm generally not prone to "buck fever" and so won't be blazing away at things on the move. I do enjoy the lighter caliber gun...having no prior experience to speak of there is a tendency to flinch when the 30-06 detonates. I'm pretty comfortable with the 6.5 and don't do that. Given the ammo situation though I wonder in retrospect if I should not have gone .308 and added a muzzle break. Not that I want to start up the caliber debate again! Cheers, T

Dammit, I 'knew' I forgot something. After you get a good bench zero, then take the rifle up as you will be shooting it in the woods, e.g. not supported by anything but your arm/hand and shoulder. Take a shot at the target and see if 'that' shot matches your zero. Hopefully it will at least be very close.

Exactly.
Try to always use the same ammo that you practice with.