On the Internet nobody can tell if you're a dog

Politeness is a sign of dignity, not of subservience. 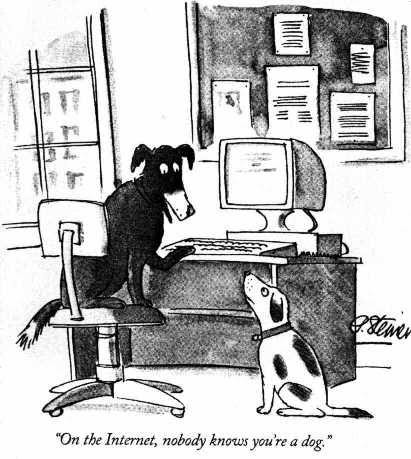 But everybody can tell if you're an asshole.

And then The Internet appeared in his comments section, with SumD00d telling him he was wrong (well, I think that's what he said because the comment was fairly incomprehensible; hey, it's The Internet, amirite?).

And while the comment was moderately incoherent, the attitude of the commenter was anything but.  Commenter "Hedge" is an asshole.  He may (or may not) be a dog with a keyboard but he is unmistakably an asshole with one.

I am very grateful indeed that the commenters here are almost always respectful and intelligent - and the commenters on the Dad Jokes are funny as hell.  I almost never need to step in to tell folks to settle down and mind their manners - maybe only 2 or 3 times in the 13 years I've been here.

People think wrong when they think that the Internet gives them anonymity.  It doesn't.  It gives pseudonymity, which is not at all the same thing.  If you post under a pseudonym (like Hedge and I both do), you still develop a reputation.  Quite frankly, you can't comment anonymously here, so anything you say in the comments here will add to (or in rare cases detract from) your reputation.

Divemedic certainly doesn't need me to fight his fights, that's not the point of this post.  I love  comments and the two way (or multiple way) discussions we have here.  But I'm not going to tolerate Internet Assholes like Hedge here.  Cathedra mea, regula meae - my place, my rules..  If you don't like it, don't stop by.  This really isn't very hard.

It is a wise thing to be polite; consequently, it is a stupid thing to be rude. To make enemies by unnecessary and willful incivility, is just as insane a proceeding as to set your house on fire. For politeness is like a counter--an avowedly false coin, with which it is foolish to be stingy.

- Arthur Schopenhauer, The Wisdom Of Life

I emailed ASM a while back on how patient he was with comments on one of his posts. I salute you here. I don't comment much, but I like your place. It's one of my daily reads.

Moving parts in rubbing contact require lubrication to avoid excessive wear. Honorifics and formal politeness provide lubrication where people rub together. Often the very young, the untraveled, the naive, the unsophisticated deplore these formalities as “empty,” “meaningless,” or “dishonest,” and scorn to use them. No matter how “pure” their motives, they thereby throw sand into machinery that does not work too well at best.
- Lazarus Long

Well that’s the hell of it, isn’t? DM got the shot and doesn’t give a hoot whether I do or not. We can get along. He still trusts the institutions whereas I do not. He’s a big boy, he will learn better eventually.

Is his fanboy an arsehole though? Or some poor slob that’s been locked down for too long, paid the price, and pushed into a corner tyrannical bureaucrats and elitists that get their jollies tormenting people that just want to work, pay their bills, and raise their kids right? Every day those guys taunt and goad us. “Why should Hollywood stars or the senate have to mask up? Why should the elites have to be injected like cattle? Of course, anyone that disagrees has to be censored…!!!”

BP, I don’t want to fedpoast on your blog, but everyday now, I wake up and hope the morning headlines show some of these arseholes are getting shot. I hate them, I won’t take orders from them, and they are overstepping their authority. They need to be stopped.

Concur with all. There are always going to be one or two that 'like' to stir it up... sigh

Yepper... nice and mellow I -think- I drove the Trolls off my house b/c man, for a while they were persistent AND threatening. Enough so that I had to take some extreme measures.

They were doing Phil up at BustedKnuckles too...
Hedge usually keeps it respectable at my house, but DMV Gringo? THAT dood needs a ride feet first thru the woodchipper...

Let me know if you're down to meet up again for some shewtin. I'm free most weekends and Sapper and I need some long distance trigger time, plus it'd be good to see you and TQotW again.

Politeness as a rule, with only one reservation: I always reserve the right to return fire.

It also bears noting that there's a difference between having a stupid idea, and being stupid. Anyone can pull off the former, while the latter generally takes deliberate effort.
But far too many are too wrapped up in their ideas to not get butthurt when you extrapolate what they've just hit upon, and note its arc ends in the outflow from the septic tank.
But in general, it's a lot more fun to disagree, if one must, without sinking to being gratuitously disagreeable.

Some people's kids never learned that.

Regarding the substance of DMs thoughts, if more people running things were that kind of sensible, the steam kettle nationally would drop to the occasional burble, instead of the nonstop shrill whistle we all hear. But that's because this isn't about medicine or science, but about control 24/7/365/forever.

The problem is too many people want to control others.

"Everybody wants to rule the world"

Respectful? Well, you did say "almost".