The FBI Inspector General's report is out, and while it is being portrayed by the media as "exonerating" the Agency, it lays out in explicit detail things like the 17 errors and omissions in the FISA warrant application used to spy on the Trump 2016 campaign.  Remember: the FBI lied on the FISA application used to spy on you and that's no crime; but it is a crime for you to lie to the FBI about the spying they did on you based on the FISA warrant they lied to get.

And so the question is: what to do about the FBI (please, no peaking at the post title).  Don Surbur lays out the cold hard truth of the situation:


The perps of this crime do not have to explain a thing. They are retired and can flip Congress the bird. Their pensions are safe and a few of them have book deals, a reward for keeping their mouths shut about Obama's corruption.

I have told readers for months, no excitement without an indictment. Without prosecution, no one is held accountable, and it will happen again because no penalty is attached to abuse of office.

And this will trickle down the FBI. It rolls downhill in government. The top men in the FBI lied to a judge to get the warrants to spy on a future president. They will go unpunished. The message is clear to the FBI: Lie. Fib. Do whatever it takes get a warrant or a conviction. The inspector general has your back.

Does anyone really expect indictments?  Heck, General Clapper perjured himself before Congress and was not indicted.  The FBI perps here didn't (quite) rise to that level.  And so, the question remains: what to do with the FBI? 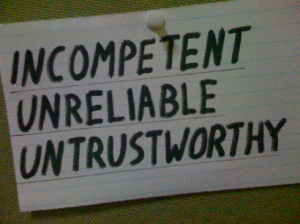 The Organs Of The State do not self-correct.

The Agency needs to be shut down.  There is no possibility of reform, not when its leadership is staffed with Obama/Democrat partisans.  They don't want to reform, and even if the people named in the IG report do end up serving hard time, the remaining FBI leadership still won't want to reform.  Donald Trump will someday no longer be President, and someday a Democrat will put his loafers on the Resolute Desk.  The Agency has to go, QED.

Quite frankly, this can be useful for Donald Trump.  The messaging is "the Deep State is corrupt and politicized and not reformable, and the Republic is better off with no Agency than a corrupt one".  The story is so big that the media will amplify his message despite themselves, and despite their desperate attempts to spin it.  After all, who wants a corrupted national police force?  And it will have much more impact at other Agencies (hello, IRS) where the leadership might just think that they're next in Trump's cross hairs.  Maybe they won't want to reform either, but maybe they might.  After all, the Democratic Party is better off if they're left with an Agency that is reduced in power, rather than with no Agency at all.

One thing that Donald Trump is good at is (politically) slitting someone's throat and watching them twitch.  Sadly, this needs to happen now at the FBI, on a much larger scale than anyone is talking about.

What a depressing place that our Republic has ended up.


I don’t know what report current Director of the FBI Christopher Wray was reading, but it sure wasn’t the one given to me. With that kind of attitude, he will never be able to fix the FBI, which is badly broken despite having some of the greatest men & women working there!
— Donald J. Trump (@realDonaldTrump) December 10, 2019


FBI Director Wray should be invited to spend more time with his family in this Holiday Season ...
Posted by Borepatch

I honestly don't know what to do about this. As you say, the ones most responsible are already out the door and safe. No solution is going to be fair, so perhaps the only thing to do is something unfair that might help.

If the Top Men are gone and can't be fired for incompetence then fire the next two or three levels for same. The secretaries, file clerks, heck maybe the janitors who were in the periphery of this. Tolerance of incompetence can't be tolerated any more than the commission of same.

This of course assumes that these are all just innocent mistakes made by hard working and virtuous public servants. I don't buy that and doubt any of your readers do, but you play the hand you are dealt.

If all we can do is increase the odds that in the future some file clerk or janitor will say...."hey, wait a minute..." that's something. Without minions these incompetent and/or corrupt Top Men are less dangerous....and less able to skate off without leaving their own fingerprints on things.

In that sense firing the people whose job it is to erase fingerprints might actually be the best thing.

If it can be shown that the malfeasance and perjury occurred while in office, there should be a way to charge these "retirees" with appropriate criminal offenses. Keep this in mind: they're receiving money from the government, and one would suppose that their retirement contract may have text consistent with retiring under less-than-honorable circumstances.

The problem here is simple: who wants to be the first to say "you broke the law during your 24th year in office and thus invalidated your entire pension"?

OTOH, perhaps it's time for such a precedent.

What Eagle said? About if the persons involved knowingly acted illegally then they should be punished? Yes. They can. They can be charged, and if found to have violated regulations and laws, have their retirement changed from 'retired' to 'terminated retroactively with cause.'

The military can do it. Say Scandal X occurs involving current and former servicemembers, investigations prove malfeasance, the current can be 'less than honorably discharged' and the former can have their status changed from 'honorably' to 'lthd.'

It's not an easy process to punish former employees who've retired. But there is a process. It requires documentation, and usually a criminal indictment AND successful prosecution (which, at that level of play, would include plea deals - the prosecution can dangle no loss of retirement benies or partial loss as part of the plea deal.)

The city I live in has successfully gone after former employees whose illegal activities while employed (stealing rolls of copper, outright embezzlement, criminal activities as a cop, that sort of thing) and 'fired retroactively' the said employees, with denial of pension and health packages.

So, yes, file charges, criminal charges against these jackwagons. If the FBI can prosecute successfully a person for perjury based solely on the recollections of a possible conversation (because no recordings existed of said conversation - really dumb move by the way) then the non-FBI can prosecute for illegally obtaining wiretaps, perjury to judges (you swear the info in a warrant application is true and factual and all that, screw that up, you've committed perjury) and a whole buncha federal violation of civil rights charges. And go after any judges who knew that the info was false, too. Any federal attorney who knew. Any person involved in the process who knew the warrants and charges laid on people were false.

Slam them. Squash them like bugs. It will savage the evil doers, and with successful prosecution, you'll see cockroaches bailing out of the sinking, rotted corpse of the FBI and DOJ.

What? DOJ? Yeah, those prosecutors and judges and all the attorneys and other nits and lice working throughout the DOJ who enabled and cooperated and conspired with the dweebs at the FBI.

A good strong cleansing. And reformation under the same level of laws and procedures they (the FBI and DOJ) require state and local agencies to work under.

Linked back from my place, where I make the argument that the FISA court needs to be disbanded, too.

As a former employee of a sub-organ of the DOJ, "We enforce the law, we don't obey it."

They've rather morphed into a Committee for (Deep) State Security, haven't they?