I have for years been posting on the dreadful state of the climate databases, and the unnatural acts performed upon the poor data by "adjustments" made by computers.  I have also posted often about the problem of the "Urban Heat Island" (UHI) effect, where a weather station in what was once a grassy field becomes surrounded by a growing city and finds itself in the middle of a parking lot.  Or worse - most airfields in the 1930s had grass runways, and that's where a large number of weather stations reside.  How those stations are not in the middle of a field but rather surrounded by tarmac and washed by jet blast.  Sure, they read hotter temperatures than in the 1930s, but this sure isn't a climate change.

Interestingly, the IPCC says that UHI is negligible, amounting to only 0.05°C warming over the 20th Century.  This seems absurdly small.  Ten years ago I posted about an excellent science experiment where a 6th grader (!) and his Dad analyzed dozens of urban weather stations and compared their reported warming against matched nearby rural weather stations.  The result is inescapable that the IPCC way underestimates the UHI effect.


So who peer-reviews a sixth grader?

I don't know, but this kid (and his dad) do a simply outstanding job of analyzing the GISS temperature data to see if there is an "Urban Heat Island" (UHI) effect - basically, are cities hotter than the surrounding countryside:

Here's why this is excellent work:

1. The analysis is controlled for time period: all stations were active from 1900 through 2006.

2. The analysis was controlled for population: only cities of 150,000 or more were used.

3. The hypothesis - that urban areas are warmer than nearby rural areas - was controlled by matching the cities with corresponding rural stations within 30 and 100 miles. This is far enough away to not be effected by any UHI from the city, but close enough to be in the same climatic region.

4. The methodology is described clearly and the data is available to anyone. Go ahead - try this at home!

In other words, good science from a sixth grader. So how does this compare to Peer-Reviewed articles on the same topic? It kicks their butt:

The newest entry in the theological literature is Parker (2004, 2006), who, once again, does not show the absence of an urban heat island by direct measurements, but purports to show the absence of an effect on large-scale averages by showing that the temperature trends on calm days is comparable to that on windy days. My first reaction to this, and I’m sure that others had the same reaction was: well, so what? Why would anyone interpret that as evidence one way or the other on UHI? 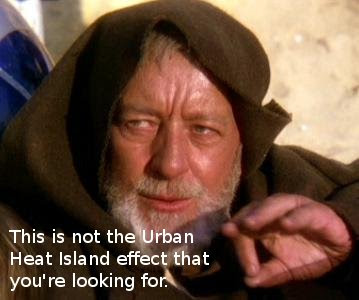 So what can we say about Dr. Parker? Is he smarter than a fifth grader? Well, we don't know, but the smart money is not backing him against this sixth grader.

And well done to young Padawan Peter for showing how Science is really done.

Come on. There is no question that they are all smarter than the sixth grader. After all, he couldn't fudge the data and they could.

I don't care who you are, that's funny right there.
Posted by Borepatch

Remember BP, the only "science" allowed to young people is making up statistics about plastic straws when you are 9yo that can not be challenged.