It's the end of the year, and at least at Castle Borepatch it's very quiet and peaceful.  Calm.  Looking at the state of the Republic, perhaps it's the calm before the storm. 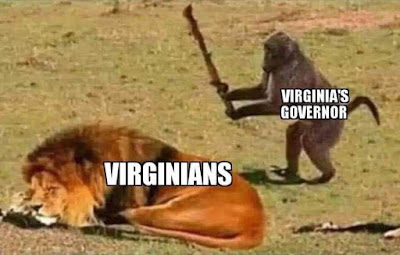 Democrats seem to be in a big hurry in the Old Dominion state.  Certainly the citizens of that state think so - almost 100 counties have declared themselves Second Amendment sanctuaries.  Senior Democrat politicians are openly musing about calling out the National Guard to confiscate firearms.  I guess we'll see just how serious they are.

Me, I think that the Re-Elect Trump 2020 campaign thanks them for their support.  This seems to be the fastest way on earth to turn a purple state red, if it doesn't start the Electric Boogaloo first.

Meanwhile, impeachment has turned out to be a big Nothingburger farce.  The Senate is waiting impatiently for the Articles of Impeachment, to see if they contain High Crimes and Misdemeanors.  We know what the Senate is ...


SENATE, n. A body of elderly gentlemen charged with high duties and misdemeanors.

But for now, everything is calm.  Except for the polls, where Trump seems to be surging against each Democratic challenger.  Given what the Democrats have done up until now (when they thought they could bump Trump off the perch) it will be interesting to see what they do around March or so when their front runner begins to emerge and everyone begins to realize that Trump is going to roll to a 35 state landslide.  That will be a new situation for the Republic - an impeached President winning big in the next election.

We've been told for 3 years now that Trump is destroying the norms of our civilized political institutions, but strangely it's the Progressives who just can't seem to accept the results of elections.  It's the Progressives that are forcing unpopular laws on large minority populations (Republicans are a minority in Virginia, for example, but they are 49% of the electorate).  The population is seeing the imposition of unpopular ideas by Democrats who have a thin majority: impeachment, gun confiscation in Virginia, Bake That Cake, men in women's rest rooms, the corruption of the FBI.

But for the moment, it's delightfully calm, at least here at Castle Borepatch.  The Queen Of The World and I are going for long walks with Wolfgang - after all, he has new frisbees to break in.  It's nice.  Peaceful.

And unlikely to last.
Posted by Borepatch

Since you're going all Biercian on us:

HONORABLE, adj. [1.] Afflicted with an impediment in one's reach. In legislative bodies it is customary to mention all members as honorable; as, "the honorable gentleman is a scurvy cur." [2.] Holding or having held a certain office in the public service — a title of courtesy, as "the Honorable Snatchgobble Bilque, Member of Congress."

PEACE, n. In international affairs, a period of cheating between two periods of fighting.

PRESIDENT, n. The leading figure in a small group of men of whom — and of whom only — it is positively known that immense numbers of their countrymen did not want any of them for President.

REPUBLIC, n. A nation in which, the thing governing and the thing governed being the same, there is only a permitted authority to enforce an optional obedience. In a republic the foundation of public order is the ever lessening habit of submission inherited from ancestors who, being truly governed, submitted because they had to. There are as many kinds of republics as there are gradations between the despotism whence they came and the anarchy whither they lead.

The problem isn't so much that Democrats pass unconstitutional laws with a thin majority. It is that they hate us and want us silenced and subservient if not dead.

Concur with Richard, and what they DON'T understand is that we have a 'vote' in that... And maybe NOT the vote they are expecting...