The highest paid athlete of all time

As a change of pace from Climate Change and the impending Electric Boogaloo in Virginia, here's some interesting trivia.  The highest paid athlete of all time lived in the Roman Empire:


Gaius Appuleius Diocles (104 – after 146 AD) was a Roman charioteer who became one of the most celebrated athletes in ancient history. He is often cited as the highest-paid athlete of all-time.[1][2]


His winnings reportedly totaled 35,863,120 sesterces, equivalent to 358,631.20 gold aureus or 26,000 kg of gold. As one modius (6.67 kg) of wheat in 79 AD Pompeii cost seven sestertii, Gaius Appuleius could have acquired 34.172 metric tons of wheat, equivalent to US$6.49 million in 2019. His earnings could provide a year’s supply of grain to the entire city of Rome, or pay the Roman army at its height for a fifth of a year. Classics professor Peter Struck describes him as "the best paid athlete of all time".[1]

Wheat is a lousy measure for comparison, because modern agricultural productivity is so far beyond what the Romans had that wheat is essentially free.  A better comparison is that whole "pay the Roman army at its height for a fifth of a year".  Taking the US DoD budget as around $800B, this gives us a modern equivalent wealth of around $160B - around 100 times what Michael Jordan made (the top modern athlete in terms of earnings).

And a note about the 35M sesterces - you needed to be worth 1M to qualify for Senatorial rank, so Diocles would have been in like flint.  However, the social status of gladiators and charioteers (no matter how popular) was very low, in fact just one minor step up from the status of slaves.  So there's no way that the Romans would have considered him for the Senate.  Probably just as well since it was a stuffy body full of hot air and nonsense by this time.  While it's not true that the Emperor Caligula appointed his horse to that body, he should have. 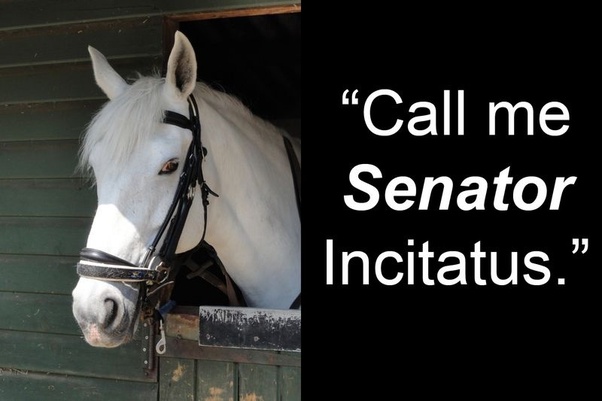 Yet another meaningless comparison... Sigh... Like many of the hypotheticals, there is NO right answer...

And the horse senator? He always voted "Neigh."

Borepatch
What's the odds we both do a post on Roman Charioteers on the same day!

Beans, that made me laugh out loud.

Tim, I believe that this is an example of the Duarchy in action. ;-)