The Queen Of The World and I are back from a week's cruise, celebrating our anniversary.  Some friends on the ship fixed up our cabin: 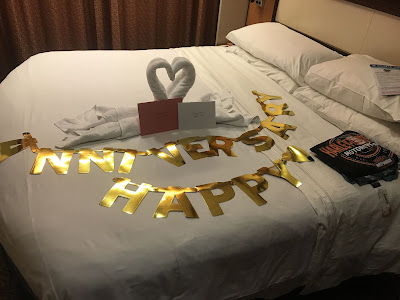 The cruise was the High Seas Rally - the entire ship was chartered for a motorcycle rally.  It was a blast - formal evening dinner meant wear your leathers.  I'll put up some more pix later, but apologies to all for the light posting (I scheduled some posts but it wasn't as many as usual) and the complete failure to reply to your comments.  We didn't get the phone/Internet plan and so were entirely off-grid for the week.  It was awesome.

Labels: me me me, mucking around in boats, Queen of the World

Congratulations on your anniversary.