I've posted each year about the "Christmas Truce" on the Western Front in 1914.  This year is no exception, but I want to preface things by describing just how the opening weeks of The War To End Wars is nothing like what we think.  In many ways it was worse for the men on the ground, which only makes the spontaneous outbreak of peace even more amazing.  The bitterness that the soldiers of both sides must have felt would have burned bright, and yet the feelings of the season overcame all that.

When we think of that war, we think of trenches, barbed wire, and machine guns.  That's quite a good description of the western front, but not until 2 or 3 months into the conflict.  Initially instead of a slog over No Man's Land, it was a war of movement, with massive armies covering hundreds of miles.  August and September 1914 saw men pushed to their limits because they had to march 15 miles and then fight the enemy, and then wake up and do it all over again.  And again.  And again.

October followed up these million and a half with the Kindermord, the "slaughter of the children".  The generals were horrified at the losses, not so much because of the incredible human loss but because their forces were so rapidly depleted.  Trainees were rushed from basic training straight to the front.  At the First Battle of Ypres 60,000 of these kids were mowed down as they marched, singing, into the rifles of the Cold Stream Guards.

The German artist Käthe Kollwitz made a sculpture in remembrance of her son, Peter, killed in the Kindermord.  He, like most of his comrades, was 18.  You can see it if you go to the Vladslo German cemetery in Diksmuid, Belgum.  The grief and bitterness is captured in stone. 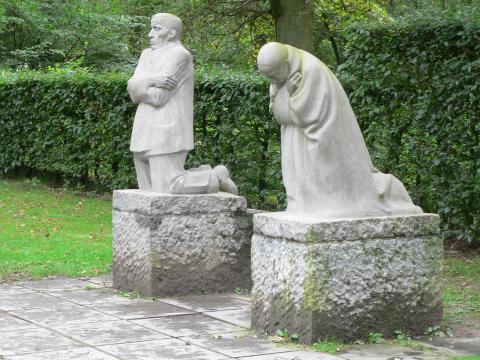 Only then did it settle down to trenches, barbed wire, and No Man's Land.  So if anyone was justified in holding a grudge, it was everyone in a trench on the Western Front in December 1914.  And yet, this happened instead.

105 years ago today, 100,000 soldiers in the trenches of the Western Front stopped shooting each other, at least for a little while.  Instead, moved by the spirit of the season, they met in No Man's Land to exchange greetings and brandy, and to play soccer.
The Generals were less than amused, and cracked down in following years.  Captain Sir Iain Colquhoun was Court-marshalled for his participation.  After they convicted him someone recalled that he was related to the British Prime Minister, and so they swept it all under the carpet.Historians now occupy the field of battle because all the eye witnesses are now long dead.  All that we have are stories from those who remember those witnesses. But we know that December 1914 saw something unique in trench warfare: Christmas showed that the human heart still beat on the front lines.  This song from 1984 was back when some of those men still lived, and John McCutcheon tells of how some of them came to his concert because they heard the song on the radio:


All our lives, our family our friends told us we were crazy.  Couldn't possibly have happened to us.  Then we heard your song on the radio and said "See? See? We were there."


My name is Francis Tolliver. I come from Liverpool.
Two years ago the war was waiting for me after school.
To Belgium and to Flanders, to Germany to here,
I fought for King and country I love dear.

It was Christmas in the trenches where the frost so bitter hung.
The frozen field of France were still, no Christmas song was sung.
Our families back in England were toasting us that day,
their brave and glorious lads so far away.

I was lyin' with my mess-mates on the cold and rocky ground
when across the lines of battle came a most peculiar sound.
Says I "Now listen up me boys", each soldier strained to hear
as one young German voice sang out so clear.

"He's singin' bloddy well you know", my partner says to me.
Soon one by one each German voice joined in in harmony.
The cannons rested silent. The gas cloud rolled no more
as Christmas brought us respite from the war.

As soon as they were finished a reverent pause was spent.
'God rest ye merry, gentlemen' struck up some lads from Kent.
The next they sang was 'Stille Nacht". "Tis 'Silent Night'" says I
and in two toungues one song filled up that sky.

"There's someone commin' towards us" the front-line sentry cried.
All sights were fixed on one lone figure trudging from their side.
His truce flag, like a Christmas star, shone on that plain so bright
as he bravely strode, unarmed, into the night.

Then one by one on either side walked into no-mans-land
with neither gun nor bayonet we met there hand to hand.
We shared some secret brandy and wished each other well
and in a flare-lit soccer game we gave 'em hell.

We traded chocolates, cigarettes and photographs from home
these sons and fathers far away from families of their own.
Young Sanders played his squeeze box and they had a violin
this curious and unlikely band of men.

Soon daylight stole upon us and France was France once more.
With sad farewells we each began to settle back to war.
But the question haunted every heart that lived that wondrous night
"whose family have I fixed within my sights?"

It was Christmas in the trenches where the frost so bitter hung.
The frozen fields of France were warmed as songs of peace were sung.
For the walls they'd kept between us to exact the work of war
had been crumbled and were gone for ever more.

My name is Francis Tolliver. In Liverpool I dwell.
Each Christmas come since World War One
I've learned it's lessons well.
That the ones who call the shots won't be among the dead and lame
and on each end of the rifle we're the same.

This Christmas Eve, remember those caught up in the killing fields of Flanders, and the Ardennes, and Khe Sanh. And remember those who still stand post far from home and family tonight.
Posted by Borepatch

On Halloween 1914 the German army threw everything they had at the Ypres salient in a desperate effort to reach the sea before winter and mutual exhaustion ended the campaign season. I've helped excavate the aftermath, bodies lined up in mass graves, still wearing their calfskin backpacks full of tent stakes and blankets. And they were still carrying things as well. Crucifixes, meershaum pipes, a big bottle of French perfume. A few miles to the south an excavation came up with the remains of a teddy bear of the German variety. Adolf Hitler walked across this field, unfortunately zigging and zagging at the appropriate moments. No wonder that a few weeks later all the fight had gone out of everyone on the Western front. In the east they seem to have continued the butchery uninterrupted, or at least I've never heard of a signficant Christmas truce there. Perhaps the fact that the Orthodox church celebrated on a different day was enough of an obstacle in addition to more language barriers. Most of the talking in the Western Christmas truce was carried out by Germans who had in large numbers been waiters in England before the war!

Tim, it must be something to unearth bodies where the last person who had seen the contents of the backpack was the person killed. That must be a sobering experience.

I'd never heard that story about the waiters. But there was a massively popular book in the years running up to the war. It basically said that war was impossible because the economies were growing too fast, were too interdependent, and everyone was making too much money. Basically Globalization was the goose that laid golden eggs, and nobody was going to mess with it. Man, that sure was a miscalculation.

Gah - too busy to read the fine lecture - will catch it when things settle down. Merry Christmas, boys.

Err... can ASM still get a crate of Christmas hand grenades in the mail to me? WITHOUT the pins pulled this time...?

This brought a tear to my eye. Thank you.

Thank you for remembering!

Thank you.
Dusty in here.
Thoughts of absent comrades and those standing on the wall tonight.