The rise of Donald Trump, in a single chart

An old post at The Gormogons discusses a poll from 2014 - before Donald Trump - that explains pretty much everything you need to know to understand why he won the 2016 election: 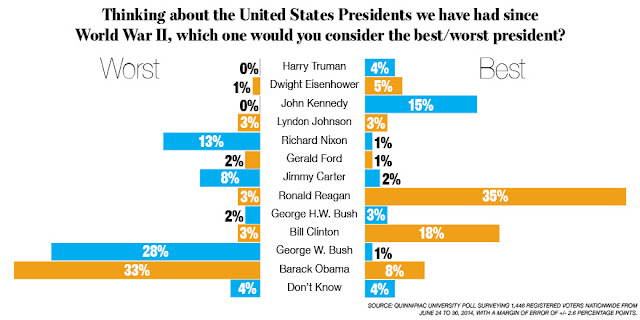 The Czar of Muscovy explains the poll:


Last week, despite the intense suppression of the main stream media, the generally pro-liberal Quinnipiac polling team released a poll that asked folks who the best and worst presidents have been in living memory (since World War II, which is fair enough). The results were unexpected, at least by the Czar

Yes, George W. Bush, the worstest, most awfully unpleasant president ever…no longer holds the title. That’s right! Barack H. Obama has now taken the mantle as the worst president ever. And not by a little… when the difference between Bush and Obama is more than the “don’t know” count, that’s big. And not, pace the Quinnipiac press release writers, “narrow.”

In 2014, both George W. Bush and Barack Obama were seen as failed Presidents.  Both represented the establishment party position which is essentially the same with window dressing to make them look like two parties rather than one.  Extrapolating to 2016, we can see how Jeb Bush didn't have a chance (too closely linked to his brother), why Hillary lost (too closely linked to Obama), and why Creepy Joe Biden's campaign is Dead Campaign Walking.