And the band played "Waltzing Matilda"

100 years ago, lads from Australia and New Zealand hit the beach at ANZAC Cove, Gallipoli. 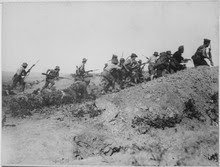 It was an ambitious plan put forward by Winston Churchill to take Istambul, the capital city of Turkey, and knock that country out of the war (also restoring a route through the Black Sea for resupplying Russia).  It failed spectacularly, quickly bogging down into the miserable trench warfare that defined most of the Great War.  Eight months and 400,000 casualties later, the forces were withdrawn.

The event was traumatic at the time, and was instrumental in the emergence of a distinct Australian and New Zealand spirit.  April 25 has been celebrated as ANZAC Day ever since.  The pride in how the Lads from Down Under held up under impossible conditions was - and remains - a source of pride.

But the remembrance is bitter sweet.  The impossible conditions were precisely that.  The fine musical tradition of the Antipodes has captured that as well.

Happy ANZAC Day to our readers from Australia and New Zealand.  We will hoist a frosty one to the ghosts marching by the billabong.
Posted by Borepatch

I probably mentioned it before, but Schooner Fare would do this and there wouldn't be a dry eye in the house. At least that I could see.