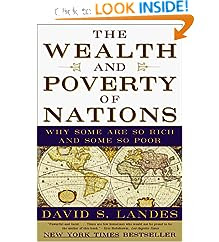 As a public service, here's something that you should read if you really want to make a liberal's head explode like the fembots in Austin Powers. Or understand why the world's economy is the way it is. The Wealth and Poverty of Nations, by David Landes. The title is intentionally taken from Adam Smith, but Landes focuses less on describing economics per se, and more on the constraints that a society puts on their economy.

It traces the history of economic development over the last 1000 years, and asks some very politically incorrect questions:
No, it wasn't "western imperialism" by dead white dudes. Landes' politically incorrect thesis is that society counts, and some societies foster faster economic growth than others. He uses many, many examples.

The quote for this election season, if we're smart enough to listen, is about the post-Cold War economies:

Among the heaviest losers in this period of record-breaking economic growth and technological advance were the countries of the Communist Socialist bloc: the Soviet Union at the bottom of the barrel, Romania and North Korea almost as bad, and a range of satellite victims and emulators struggling to rise above the mess. Best off were probably Czechoslovkia and Hungary, with East Germany (the DDR) and Poland trailing behind. The striking feature of these command economies was the contradiction between system and pretensions on the one hand, performance on the other. The logic was impeccable: experts would plan, zealots would compete in zeal, technology would tame nature, labor would make free, the benefits would accrue to all. From each according to their ability; to each according to his deserts; and eventually, to each according to his needs.

The dream appealed to the victims and critics of capitalism, admittedly a most imperfect system - but as it turned out, far better than the alternatives. Hence the Marxist economies long enjoyed a willful credulous favor among radicals, liberals, and progressives in the advanced industrial nations;

You'll hate this if you think that economics a la John Kerry and Barack Obama is the flippity floppity floop.

Contradiction between pretension and performance: nice phrase, that. For an example, see Patrick, Deval. For extra credit, compare and contrast Obama, Barack.

Dang, I think I must have just got my Hate Speech on, right there.
Posted by Borepatch

Very interesting. I am going to order this one for sure. Thanks for the review.