What is the "Classical Music" of Ireland? It's not (Italian) Opera, or (German) symphonies, or even an (English) homage to Ralph Vaughan Williams (who studied under an Irish music professor) "countryside music" in the concert hall. Instead, we find something ancient. 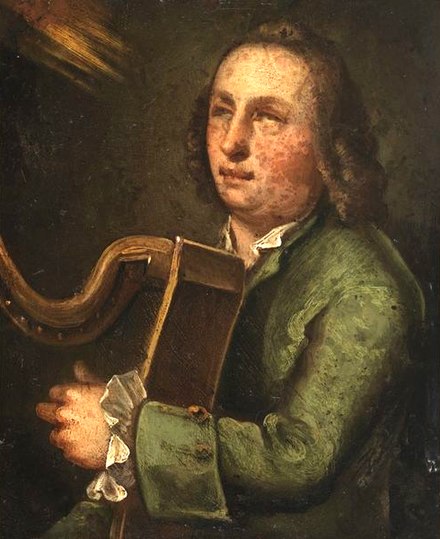 We find something that easily might not have been.  Turlough O'Carolan (1670 – 25 March 1738) was the son of a blacksmith.  His father took a job for the MacDermot Roe family; Mrs. MacDermot Roe gave the young lad some basic schooling and saw in him a talent for poetry; when a few years later the 18 year old Turlough went blind after a bout of smallpox, she had him apprenticed to a harpist.  He soon was travelling the land, composing and singing.

This tradition was already ancient by the early 1700s.  it was undeniably Celtic, dating back through the Middle Ages, through the Dark Ages, through Roman times to a barbarous Gaul.  There bards travelled the lands playing for their supper on the harp.

This was O'Carolan's stock in trade.  He rapidly became the most famous singer in the Emerald Isle.  It is said that weddings and funerals were delayed until he was in the vicinity.  One of his most famous compositions - if you have spent any time at all listening to Irish music, you know this tune - was considered too "new fangled" by the other harpists of his day.  Fortunately, he didn't listen to their criticisms.

He married very late, at 50, and had many children.  But his first love was Brigid, daughter of the Schoolmaster at a school for the blind.  He always seemed to have carried a torch for her.

So why is this post in the normal slot reserved for Classical Music?  Listen to this composition of his, and you see the bridge from the archaic Celts to Baroque harpsichord.

And keep in mind how this brilliance might never have blazed, had Mrs. MacDermot Roe not seen the talent in a blind Irish boy and set him upon a path trod by many equally unexpected geniuses, all the way back to St. Patrick.  It is truly said that we never know what our own path will be until we set our foot down on it.

But his was an ancient path and he inherited much from those who trod it before him.  His "Farewell to Music" is said to be more in the traditional mold, and might have been appreciated at a feast held by Vercingetorix before the battle of Alesia.

This music is a bridge between modern and the ancient that disappears into the mists of legend.  Perhaps more importantly, it is a music that is still alive today, after a run of perhaps two and a half millennia.

And it is a music where you still hear the yearning of a young blind man for his muse, Brigid.  That is a vitality that should not be exiled to a single day of celebration, even if it is for as illustrious a Saint as Patrick.  On this Feast Day, remember just how deep the roots of our civilization run.

Borepatch, I play the Irish Harp and O'Carolan is a staple if you are in that music. His was the brilliance of matching the then-current preferences of Continental Music with the ancient tradition of harpists of Ireland (Gerald of Wales wrote of them in the 12th century and they figure in all the great stories). Sidhe Beag Sidhe Mor and O'Carolan's Quarrel with the Landlady are my favorites.

For a very different (but contemporary) of O'Carolan, look up Dennis Hempson (1695-1807). At the Belfast Harper's Festival in 1792 he was the only harper that played in the old style, picking with his nails instead of playing with the pads of his fingers. In some cases he would play songs which, when asked, he would reply with "I know no other way to play it". He was a relic - but an important one.