The Queen Of The World finds cool stuff.  Stuff like this: World War II "Sweetheart Grips": 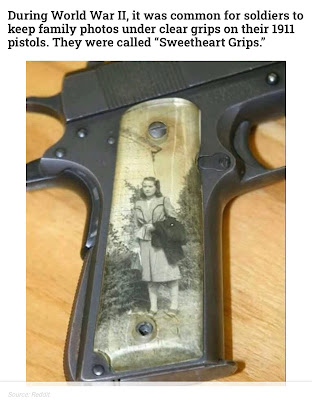 The good folks at Pew Pew Tactical have a great page up about this:

Sweetheart grips were made possible by acrylic (AKA Plexiglass or Lucite), which was invented between World War I and World War II.

Aircraft and vehicles used acrylic. The material replaced windows and basically anything else previously made of glass.

Servicemen salvaged it from crashes and then shaped it to replace the grip on their handguns.

Since the new acrylic grip was clear, they often placed a loved one’s photo under the acrylic. This kept the photo close by and safe.

Typically the picture would be a girlfriend or wife, which is where the term “sweetheart grip” comes from.

I so want some of these for my commander length 1911.  Maybe with a picture like this: 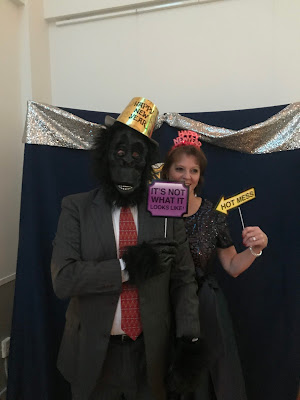 Well, or maybe a different picture ...
Posted by Borepatch

"girlfriend or wife"
Or both!

What an interesting piece of history Borepatch! I had no idea.

The gorilla suit seems like a solid choice to me...

To be done right, the grip panel needs to be two layers, so the photo can be sealed inside with some sort of glue around the edges. You really don't want that photo sitting against the frame.