Beware the Ides of March

Today is the Ides of March, the 15th of this month (each month has Ides on various dates).  While we look at the Romans as the greatest engineers and organizers until the 18th century, we then jump to the conclusion that they were rational in an Enlightenment kind of way.  They weren't.  Rather, they were kind of like a combination of Nuclear-Reactor-Brainiac and Management-By-Ouija-Board*.

The Ides themselves are a great example of this second thing.  Their months didn't really start at day 1 and count up the same way that our months do.  Well, they kind of did, but you need to break out your Ouija Board to really understand things.  The Romans didn't count forwards, they counted backwards from three fixed points in the month: the Nones (usually but not always the 5th of the month), the Ides (usually the 13th but was the 15th in March, May, July, and October), and the Kalends (the 1st of the following month).

The Ides were sacred to Jupiter, Greatest and Best, and so this was a solemn day.  Thus in Shakespeare we hear Julius Caesar warned to beware the Ides of March.  Plutarch wrote that on his last ill-fated journey to the Senate house, Caesar saw the soothsayer who had warned about the day.  Caesar joked, "The Ides of March are come;" the soothsayer is said to have replied "Aye, but not gone."  Shakespeare cribbed a lot from the ancient authors. 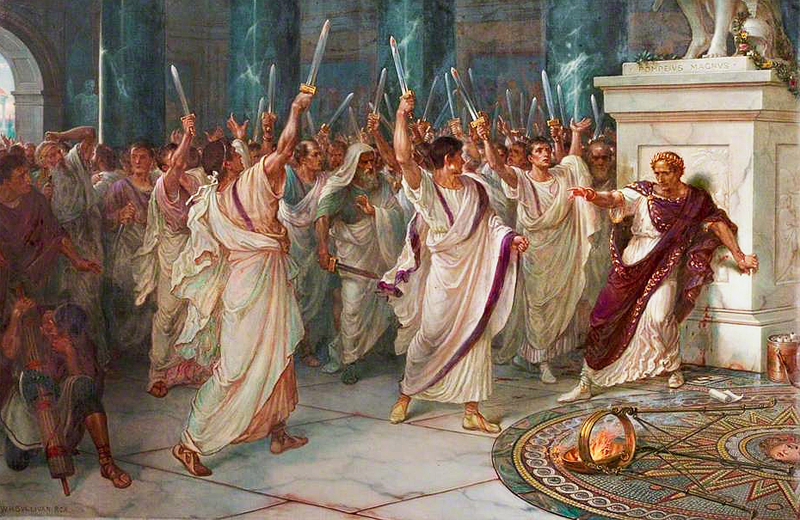 But not everything.  The famous quote from Shakespeare's play from the scene where the Senators are stabbing him is when he sees the young Marcus Brutus - of whom Caesar was very fond - among the attackers.  Shakespeare has Caesar speak the words Et tu, Brute?  Even you, Brutus?

Except that's not what the ancients said about that event.  Suetonius says that Caesar spoke in Greek - Kai su, teknon?  This was a very common expression among educated Romans, and was often used in various plays but Kai su is generally translated as "You too". That was the formal translation but it was commonly used as "Screw you".  "Teknon" is generally translated as "child" but also was understood as "punk".

So Julius Caesar basically was telling Brutus to get bent.  At least if you believe Suetonius.

* This is one of the things that make the ancient Romans endlessly fascinating.

Labels: best posts, i am a nerd, Rome

Borepach, Rome and the Roman world continues to fascinate me (to be fair, as does Ancient Greece and Byzantium). I have taken to buying Loeb Classical library editions (the ones with the original language and the translation) because I cannot get enough original source material in English.

In the back of my mind that is not filled with other useless knowledge, I always wonder how different history would have been if Caesar had survived.

Alas, not digging up Romans this year...unless some late season excavation slot vacancy turns up, and I do keep my bag packed...

A few years ago a fragment of bronze was unearthed. It was part of a perpetual calendar to help keep track of Nones and Ides and so forth. Note the N and the ID? Here's a quick link:

It was found in the ruins of a granary. Probably it had once had an important place in the headquarters building next door. Now? Just a bit of scrap in an old building that had been repurposed in the Dark Ages as some sort of post Roman chieftain's residence. I like to imagine wild little barbarian kids playing with it as a sort of hula hoop until it broke.

I read a very poorly written and disappointing SF novel a few years back that was based on a fascinating concept: what if the Roman Empire hadn't fallen?

Imagine a renaissance in the 9th century. An industrial revolution in the 13th. Where would we be now? It's too bad the book was such a stinker...

Screw you punk is much more like I would have imagined Julius to have said.