Yesterday The Queen Of The World was feeling well enough that we went to the beach.  The nice thing about living here in Florida is that we're only about 20 minutes away from there.  It rained yesterday and so despite being a weekend day in High Season, there weren't many people there.  It was awesome. 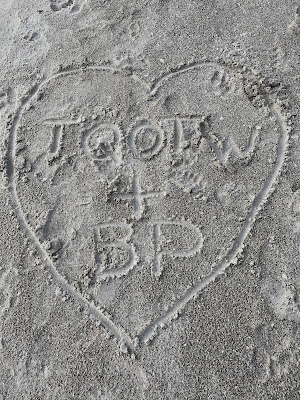 There is something about the ocean, something that has inspired artists since there were artists.  Maurice Ravel was one of many who fell under the Sea's spell.  He wrote a series of compositions for his fellow "Hooligans" (Les Apaches) who were bound and determined to break all the musical rules in the first decade of the 20th century.  This is one of those.  It is often called "Impressionist" although it seems he hated that term.  But if the chapeau fits, right?

There is a timelessness to the sea, especially when experienced on a deserted beach after a storm. 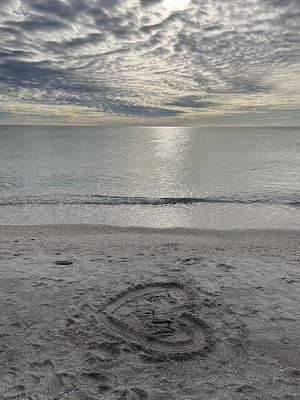 Lovely, just lovely. Ravel's Bolero gets all the attention, but he was an amazing talent as this piece shows.
Thanks for doing this.

The sea has great healing power in many ways, I hope this visit helps TQOTW.

Very nice to do something out of the norm to get your minds off of the mundane routine.
I realize it's none of our business to ask, but you did share news of her fracture and surgery. I hope surgery went well and has a favorable prognosis. Is she right or left handed? My wife had a plate about an inch long and seven screws put into her wrist, and has some residual nerve damage that has permanently weakened her (fortunately non-dominant) wrist.

I have been to the gulf quite a few times, and to the Pacific a couple. It has always been a menacing presence. It feigns peace to get you close enough to kill...

Growing up with the waving wheat fields, and grass lands, I find peace and solace there. Seeing the wind dance across the grass is beauty to me. A thick pasture of green with the critter grazing on it is heavenly to me.

Strange how different our tastes can be...

Prayers Up, Borepatch. All Hail The Queen Of The World.