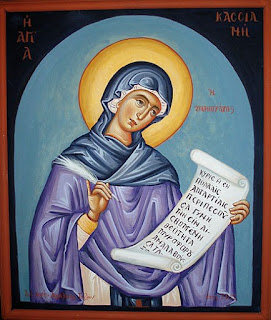 The Greek Orthodox liturgy is ancient, dating back to Roman times.  While many things have been lost from this over the centuries, we have music for Holy Week preserved from the ninth century.  This hymn will be sung this week, as it has for the last 1200 years.

Kassia was a Roman noblewoman living in Constantinople in the first half of the 800s.  Both beautiful and intelligent, she was included in what we can call a Medieval beauty pageant.   The imperial court would sometimes have "Bride Shows" where noble families could present their daughters as potential brides for Imperial princes.  Kassia was included in the bride show for prince Theophilos in 830AD, but the chronicles say that her sharp, sarcastic reply to the prince soured him on her beauty.

But she was the daughter of one of the leading families in the Empire, and so had avenues open to her that were not to most women of the day.  She founded a convent in 843AD and became its abbess.  Her education allowed her to write first poetry and then music - all of a spiritual bent, as you would imagine.

She wrote many, many hymns of which 50 survive to this day.  Unusually, both the text and the musical score have survived.  Twenty three of her hymns are included in today's Orthodox liturgy which is astonishing for any figure from the ninth century, let alone a woman.

This Holy Week you might want to ponder just how ancient our faith is, and the efforts that people have taken to preserve it over the centuries.

Thank you for today's class. I had no idea about this at all.
So much to learn!

What will remain 1200 years from now?

*in a pissy tone of voice*

I will not tolerate any dissension on this topic.

I must point out that when St. Kassia was alive it was indeed called "Constantinople" because that was before all the ethnic cleansing from post WWI happened.