Unknown - The World Turned Upside Down 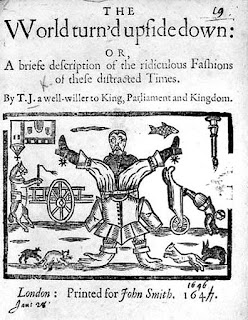 I'm re-listening to the episodes on the American Revolution from the excellent Revolutions podcast (highly recommended; the American Revolution is season 2, episodes 2.1 - 2.15).  In the episode about Cornwallis' surrender at Yorktown, the story was told about how the band played "The World Turned Upside Down" and it occurred to me that I had never listened to that song.  That's not unusual for someone who grew up in the 1960s - our school didn't even have a listening library until the 1970s, but heck - this is the Youtube Age and so it was off to the song.

It's an interesting song.  It dates to 1640, and so was old in 1781.  It was written to protest the British Parliament's policies towards Christmas.  You see, the Puritans had taken over and Christmas was considered to be Double Plus Ungood and so Parliament passed some laws restricting the traditional celebrations.  Interestingly, Revolutions podcast season 1 covers the English Civil War from this time and goes into this very topic.  It's really interesting, and so when you're over there getting your George Washington fix, check out the Puritans too.

And so to the song.  It was published - anonymously - as a protest.

The lyrics are interesting:

So there you have it: the British surrendered to the Americans (and French) to the tune of a song protesting a crackdown on Christmas.  Now you've heard it, too.

For a vocal version, here's Steeleye Span and Maddy Prior:

We played that in the Sudbury Ancient Fyfe and Drum Companie and they probably still do at the Wayside Inn.
You might have seen us!