Save the planet: clearcut the forest

"Green" energy causes forest to be cut down:

The ARD’s “Das Erste” reports how satellite images show deforestation has risen 49% since 2016 in Sweden, Finland and the Baltic countries. The reason: “Because of the CO2 targets. That sounds totally crazy but precisely because of the trend to renewable energies is in part responsible for deforestation in Estonia,” says the Das Erste moderator.

Having spent some time working for the EU, Liiana Steinberg explains in the report how she recently returned to her native Estonia and was shocked to see how much deforestation had taken place over the recent years (2:25). “I discovered how the forests no longer exists here left and right.”

You grind up the trees to make wood pellets which count as a "green" "carbon-neutral" energy source.  Except the forest is gone (hey, it will grow back in 30 or 40 years, although it will be fast growing pine and fir rather than old growth hardwood - but eggs, omlets, amirite?).

It seems that wildlife has declined by 25%.  Yay, environmentalists! 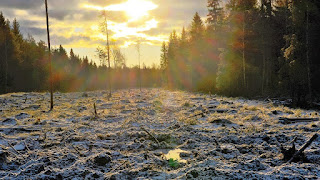 What's funny is that this keeps happening.  It seems that this has been going on for years.  Once is happenstance, twice is coincidence.  Third time is, well, you know.

Labels: europe, it's not easy being green, The decline of the Progressive West, unintended consequences

There's also the idiocy (at least in Germany) that you need an environmental impact survey for everything you want to build EXCEPT for a wind turbine.

These things LITERALLY get build into national parks, hectars of forest get cut down for these things and yet they are "green".

Plus they kill birds, especially raptors are killed by them because they prefer the open spaces surrounding the windmills.

Europe's forests have just recovered, in the span of centuries, from the devastation caused by the late Middle Ages, Rennaissance and early Industrial Age. And now this?

Plus, biomass is more expensive, less energy efficient, and much more polluting than cleaner coal and nat-gas plants. Much more prone to breakdowns, too.

Clear cutting isn't all bad. About 20 years ago, I bought some land for hunting and where I was going to build my retirement place. I asked the local ag extension guy to come out and look it over. He said that the best thing I could do was to clear cut it. The reason was that it was all 60-year-old forest, full of mature pine trees. Pine trees in that area live for about 60 years, and they would start dying off and falling down -- inviting beetles to come in and cause disease. In contrast, if I clear cut it, not only would I make about $75K (in year 2000 dollars) from the wood, but in 5 - 10 years, there would be new reasonable growth and *more* wildlife than there was now.

My wife wouldn't stand for it, though, saying it would be ugly. This year, we sold the land. Before we sold it, we had a timber cruise done. The estimate was about $60K (in year 2020 dollars), because the timber was in poor shape and full of beetles.

My little piece of WV wants to replace 8,000 acres of farmlands and forest for a solar farm to send energy to...California.

Don't forget the palm oil plantations that were expanded in South East Asia thanks to 'green regulations' for bio-fuel.

I always find it funny (and scary) how arrogant environmentalist are. They truly believe with out them life on earth would cease to exist. How selfish! And their plans and policies are always worse than what they are trying to stop but they justify it by saying "we have to do something."