Corona virus and the illusion of science

We're seeing this graph in the media: 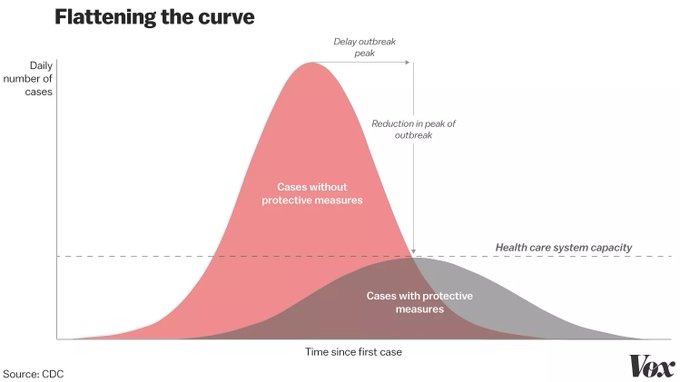 Vox is a journalist "explainer" site, and this is a great example of journalists explaining things to the general public.  The overall idea is sound, that prohibiting large public gatherings will slow the spread of the virus; a slower spread will lower the peak number of cases; a lower peak will (hopefully) preclude a situation where the medical system gets overloaded.


The snake oil salesmen spreading the meme (and it has appeared in NPR, Wired, and tons of other far left outlets) make several statements such as

Maybe it's correct, but maybe it isn't.  We don't know a lot, and in fact don't know almost anything important about these curves.  How fast was the virus spreading before large gatherings were banned?  We don't really know because testing hasn't been available except in very limited capacity.  How fast is the virus spreading after large gatherings were banned?  Same answer.  What's the capacity of ER rooms?  We don't know what this will be once the virus is circulating - medical personnel very well may become infected, and it's not the number of ER beds that's key, it's the number of ER beds that medical personnel can provide care for.  What's that number?  Well, it depends on how many ER staff get infected.  How many is that?  We don't - and can't - know until it happens.


The situation in which the NBA+NHL really changes the qualitative behavior is equivalent to a fine-tuning in the sense of particle physics, and is therefore "unnatural" and unlikely. A small effect is very unlikely to change the answer to a big qualitative question from Yes to No or vice versa.

The same implausible demagogic claims have been made in the case of the climate hysteria, of course. That hoax was a rehearsal for this more heated hysteria that people are undergoing today. In the climate case, you were told something like

The correlation between "using your SUV" and "seeing polar bears extinct by 2100" is of course basically zero for absolutely all practical purposes and most of the impractical purposes, too.

But here we go again. Some demagogues are just inventing pure šit and millions of people are so stupid that they are consuming this šit while smacking their lips. In fact, these millions of incredibly gullible and stupid people seem to be vigorously helping the demagogues to shove the šit down their own throats!

So the NBA+NHL almost certainly won't impact qualitative questions such as "whether the U.S. will run out of the some quality hospital beds". The total number of cases at one moment may peak at hundreds of millions in the truly worst-case scenario but it may also peak at a number comparable to a few thousand. There is some five orders of magnitude in between. For someone to claim that he "knows" that it must be some number that is much higher than the current one means for him to become a 100% dishonest seller of the totally irrational hysteria.

FYI, the linked post is from an actual scientist, who knows math and statistics and stuff.  He warns to take what politicians and talking heads say with a big grain of salt:


For example, some complete aßhole in Ohio, a governor or similar crap, has asserted that there are about 100,000 Covid-19 positive in Ohio. It's ludicrous nonsense, of course. The fatality rate isn't much below 0.1% (look at the cruise ship, for example) so there would already be at least hundreds of deaths in Ohio if the claim about 100,000 were right (there are none or almost none). It's implausible that 100,000 people were infected at almost the same moment so many people would already be in big trouble by now. How stupid do you have to be not to figure out that this is just pure fake news by a complete moron who should be arrested for many more years than the people who scream "fire" in a full movie theater?

I strongly encourage everyone to click through and read his post which, while acerbic, is full of sensible analysis about what public policies plausibly make sense.

Vox's graph is the kind that the post World War II managerial elite loves.  It's a plausible idea with no real data backing it up, but is all dressed up in its scientific-go-to-meeting-suit.  It's like the Drake Equation:


The Drake Equation is designed to estimate the number (N) of planets in the galaxy that have intelligence life.

Looks like math, right? Science!
Um, not so much. You see, we have quite poor information about what the value should be for most of these variables. The Wikipedia article covers this in some depth, but it's summed up with, well, what I said:


Criticism of the Drake equation follows mostly from the observation that several terms in the equation are largely or entirely based on conjecture.

So the graph is really nothing more than people saying "Stay home, wash your hands, and stop touching your face," only trying to sounds smarter than they really are.
Posted by Borepatch

Labels: blinded by science, Coronavirus, The decline of the Progressive West

Go ahead. Just try to not touch your face. It's almost impossible for any normal human. If your eye or nose itches a little, you rub it. It's almost a semi-autonomous motion, like breathing. You do it without thinking about it. One of the most humorous YouTube video's I have seen lately was a bunch of media personalities and high-level officials, all telling us on air to "stop touching your face", who immediately... Touched their face.

One thing with the Drake Equation, and a different way to appreciate it is we know that N is 1 at a bare minimum, We exist. However how much more than one is speculative, but even if its some really large number of decimal places to the right as in 1.mumble its significant.
Like most theories we have to test it and to do that we have to get out there or they visit.

All the avoidance and such does not mean I may not get CV19. It
may mean I likely get it later or when we know more how it behaves
or better how to treat it. So in the sense its likely time is a
value of its own. If time is a large enough number maybe
effective treatment or vaccine is the critical factor (and hope!).

The biggest unknown is how lethal as in data, and under what conditions is it so. Right now with small sample sizes (in human terms) the sample sizes are only getting to the level of "somethings happening" and data is sparse.


Add one thing if your touching your face wash it often!
At best it can help if not low hazard.

A suggestion I'd heard, when you get home from work or whatever,
soon (or before if possible) strip and put clothes in the washing machine to wash go direct to shower. Fresh clothes. Its in the can't hurt but only if you have washing supplies and can do that.

I'm reading posts from people purporting to be immunologists (and I assume they are) who are claiming that they have seen the virus and it is not any different from what we've seen before.
I smell a rat.

Roy, I carry tissues with me and when I need to touch my face I use them. Not sure how much more effective it is, but probably a lot better than with my grubby hands. And I'm washing my hands ALL the time.

Eck!, that was really my point - we know a very limited set of data with some reasonable precision, and then rapidly descend into Drake Equation level of uncertainty. And so the output of any model we hear about for Corona Virus Lethality is speculative at best.

Ed, I'd love this to be a flash in the pan, especially as The Queen Of The World and I are over 60. We'll know better in a month; two weeks if we're lucky.

Drill instructors make an art form out of teaching not to touch your face. Or move. Or scratch. Or any other normal human thing you grubby little Privates might be thinking of doing.

Agree with your "don't touch" comment.
Biden and Bernie both touched during their "debate".

We need to be concerned. We need to be prepped. We now know many things that we didn’t before, but long suspected.

- the media cannot be trusted

This is all good news for us, actually. Most of us are smart enough to look after Not only ourselves, but our communities as well. We can also defend them. The people at most risk are our sick and elderly. After them come our marginal people. The welfare slobs, the single mothers, and the parasite class. In other words, shitlibs and their enablers.

The way forward now is to form small groups, be concerned but not frightful, and see how things shake out. For now, gather up and pool your resources with the proper people, exclude the proper people... and divide the labour and responsibility as much as you can. Cripes, in the 1600’s they had plagues every year. Stay loose and frosty and you’ll almost certainly be alright.

What they haven't done, is to show causation rather than correlation, I.e., whether any damn thing they do will work. Due to the CDC boning the testing kits, there has been virtually no testing anywhere until a few days ago, which is why I suspect the cases in the wild (as of this posting date) are probably an order of magnitude larger - or more - than the number of confirmed cases.

That would be 60,000 cases, or 600,000 cases, rather than 6000.
The higher it is, the less effective even the most draconian measures will be, because the horse left the barn long ago, and no lock will fix that.

IOW, a sign saying "Please don't let your elephants climb the trees" is not sufficient explanation for the lifelong dearth of elephants in the trees in NFYC's Central Park, nor does pointing to such a sign prove that it will work.

Because, for one reason, elephants will do pretty much whatever they want to do, and for another, they can't read signs either.

The correlation kicks in when you note that they also can't climb trees, and therefore the signage is totally superfluous.