About ten o'clk he made several attempts to speak to me before he could effect it, at length he said, -- "I am just going. Have me decently buried; and do not let my body be put into the Vault in less than three days after I am dead." I bowed assent, for I could not speak. He then looked at me again and said, "Do you understand me? I replied "Yes." "Tis well" said he.

About ten minutes before he expired (which was between ten & eleven o 'clk) his breathing became easier; he lay quietly; -- he withdrew his hand from mine, and felt his own pulse. I saw his countenance change. I spoke to Dr. Craik who sat by the fire; -- he came to the bed side. The General's hand fell from his wrist -- I took it in mine and put it into my bosom. Dr. Craik put his hands over his eyes and he expired without a struggle or a sigh!

George Washington was in astonishingly good health in 1799.  67 years old was very old in those days, but the former President was very active and was energetic enough to help push a carriage out of a snowbank a couple days before his death.  But he came down with what doctors today think might be acute bacterial epiglottitis; unfortunately for the President, doctors were summoned:

The bleedings inflicted by Washington's doctors hastened his end. Some 80 ounces of blood were removed in 12 hours (this is .63 gallons, or about 35% of all the blood in his body).

A British physician of the era, John Reid, estimated that up to 90 ounces had been removed, and sarcastically remarked that the "current of blood" drained from Washington reflected the mighty currents of American rivers! Reid also criticized the heavy dosing of calomel plus the administration of emetics, vinegar vapors, and blistering to a man in his late 60s.

The "cure" is what did in the patient.  They didn't understand the consequences of their actions.  Well, some of them did:


One of the three doctors atteding Washington, Elisha Cullen Dick, objected to continued bleeding, arguing instead for tracheotomy. Tracheotomy is a surgical procedure recognized today as potentially life-saving in epiglottitis, but was then almost unworkable. Dick was overruled by the senior physician, James Craik. "Undoubtedly, the specter of failure with a grisly, painful (in the absence of anesthesia), and untried surgical experiment on the former president weighed heavily in Craik's decision to veto this radical suggestion".

The optics were bad, so they bled him some more.

It's sure good that we'd never do anything as boneheaded as that ... /SARC

There are three very interesting Coronavirus narratives emerging in just the last day or two:


So look at this situation: things are not as bad as we feared, governments are to some extent demonstrably incompetent and untrustworthy, and the draconian crackdown/overreaction is destroying businesses, jobs, and people's lives.

My prediction is that we're going see more of this narrative over the coming week.  And that will be a good thing, hopefully making idiot grandstanding politicians think twice before bleeding the patient yet once more. 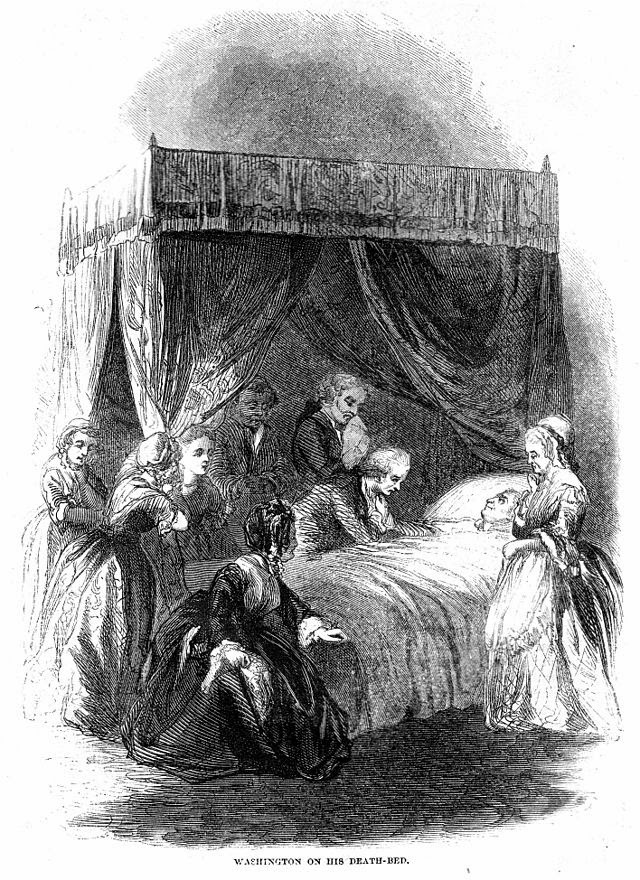 I wouldn't put my chips on this fizzling just yet.

Me, either. Until there's a viable treatment, it won't be just the deaths, it will be millions of people that survive with permanent lung damage.

I was thinking of Oric of York as I was reading your post and then saw the link :)

I posted yesterday on this being Socialism by Mandate.
Powered by fear.

Aesop, I'm not. But even on the high ends - 2M dead, $2T damage to the economy - that's a million dollars for each death. Of course, it won't go to their families but rather to a metric crap ton of graft. At some point you have to wonder when the government is more dangerous than the virus.

Ed, it had been years since I'd thought of that skit.

Information from closed environments and places of proper response show that the Corona virus is not the Big Bad Booger that the MSM has portrayed it to be.

Is it deadly? Yes. Just like any other Corona virus when medical response and government response has been ass-hatted to the max.

So far our governments' responses have been on the par of the CDC. Lacking in common sense, a way to blame someone (like President Trump) and more worried about turf wars and talking points than actually reacting.

Seriously. After this is over, the CDC should be purged of anyone who thought, during this time, that it was more important to protect one's turf and to be exclusive than it was of saving lives.

The metrics that matter aren't how many dead. Even if it was a CFR of 4%, and it killed 12M Americans outright, we'd "only" have 318M of us left to carry on.

But if it overtops 900K hospital beds, and 93K ICU beds, you lose all healthcare for everyone, and normally survivable problems become a death sentence.

Or else, we start practicing widespread euthanasia.
That is not a Rubicon to cross lightly.

Does healthcare recover?
Do people in it want to stay, afterwards?
And yes, how many people are permanently disabled afterwards, even if they survive?
None of those are idle questions, any more than "Will there be an economy, and jobs in it for people, when this is over?" is.

And it may drag manufacturing jobs, kicking and screaming, back to the U.S.

Life afterwards will not go on as before,
What form it will take is probably not even recognizable yet.

And the 800# gorilla: if this lasts, how do you do a presidential election amidst it?

NO question this is interesting times. I'm taking everything I see in the media with a pound or so of salt. The real issue, IMHO, is the bed and ventilator count. THAT will be the critical things that make or break our response.

If you have been keeping up with my situation at all, you'll know I'm immunocompromised and very possibly one of the 2 million dead this thing could cause.

It's easy to write off lives at a million a piece. Far less easy to die to save others the money. My daughters are 9 and 4, respectively. I'd like very much to see them grow up. Maybe even meet my grandchildren some day.

If I knew it would help, I'd sign a promissory note for my million right now, and pay it back with interest so that I could do those things. As it is, I've prepared them to grow up without me as best I can, and hope that if the worst happens that Mrs. Goober can find them a decent step dad.

If a million dollars per life is too much, how much would be acceptable? I'd like to live, personally, and I'm glad it's being taken seriously.

Yes...we look back a couple of centuries at 'medicine' then and think "How barbaric and ignorant". Hell look back to the 50's when many shoe stores had unshielded x ray machines
present that were used to determine which shoes fit and which didn't....operated by sales people with ZERO knowledge or training. HOW BARBARIC.....and many of them died an early death from leukemia and other cancers. I can only imagine what the medical specialists a couple hundred years ago will say about us..... "How barbaric....they actually CUT PEOPLE OPEN".

I get that Goober.

But - ignore the panic, the hysterics, and the sensationalists. Would you like your survival to cost them their future? If the same idiots keep doing the same stuff - you and your kids will be going back to the 1930’s. people starved to death in those days. You can forget any shot at retirement, and your kids may as well. People will be losing their homes, their livelihood and businesses. And if we ever DO face a REAL pandemic... we will have blown our capital and our kid’s capital on this one. And let me say this: if we ever wound up in the same hospital ward with this - I’d tell the docs to make my passing as comfortable as possible, and see to the kids first. You guys strike me as the kind of men that would do the same.

Those men that attended Washington did not kill him to keep up with appearances either. They were the best at what they did, and they disagreed among themselves on how to proceed, based on what they knew at the time. Healthcare and surgery was in its infancy and we can give those men the benefit of the doubt. The same thing happened here - only the hysterics and stupid people got involved and landed on the wrong side of things. And Peter And The Wolf strike again. Did Aesop write that fable...? 😉

Thing is that we will never know how bad the virus would have been. Was it always something like the Asian flu of 1957 for which we didn't shut down the country or would it have been like the Spanish flu but for the containment measures for which we probably should have shut down the country as much as you could with a war on. Or even something worse. We don't know and never will. This will be especially true if one of the treatment regimes being worked on bears fruit. Whatever happens though the ideological wars are likely to intensify.

If Trump should win reelection, he absolutely has to focus on draining the swamp. He has done an exemplary job on the containment but has had to fight an incompetent and hostile bureaucracy all the way, not to mention the media. The CDC and FDA have been problems for decades. And lest we forget, nothing has been done about the coup plotters at DoJ and FBI.

I note with interest the sudden apparent spate of anecdotes about the harrowing experiences of the young and healthy with COVID-19. I shall be interested to see whether there are more of these, particularly if the worst case scenario fails (may it please the Heavenly Father) to emerge.

That these anecdotes are likely true and accurate I freely concede. I draw no conclusions at this time (other than perhaps about the degree to which the press has torpedoed its own credibility); I merely report an observation.

The "John Adams" miniseries some time back was EXCELLENT.
The sequences where they bled him were... difficult to watch.