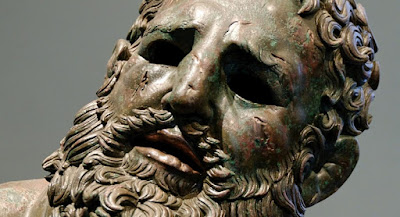 The Boxer at Rest is a bronze Hellenistic sculpture dating from somewhere between 330 - 50 B.C. Rather than showing a heroic figure, it shows a battered boxer. His nose is broken, his lip is split and he has cauliflower ears as well as numerous cuts. The statue also has copper inlaid to represent splattered blood.

There are more photos at his place, and I strongly encourage you to go look.  The anonymous artist knew well how to represent a timeless subject, these two millennia ago.

We've lost this.  The so-called "art community" not only lacks the talent to produce a work as timeless this, it doesn't have any interest in doing so.  Here are a few examples of the wasteland that is modern sculpture.

Lest you think that I'm being unfair to the "art community", these are all from the Wikipedia page on Modern Sculpture.  These are the sculptures highlighted by people who are jazzed by the subject, and this is the best they can come up with.

It reminds me of this:

This was made after the "Carolingian Renaissance" of Charlemagne, an age where the civilization of the post-Roman barbarian kingdoms had recovered enough to explicitly model itself on the Roman Empire.  It has been said that the Holy Roman Empire was neither holy, nor Roman, nor and empire, but it was marketed that way at the time.  And this was the best that they could do, 1300 years after The Boxer At Rest.  It wasn't nearly as technically proficient, but they were trying.

The Holy Roman Emperors at least wanted to restore art to its former glory, but it would be another 500 years before Michelangelo actually pulled that off.

Today's "art community" doesn't even want to do this.  The people who preen as a "cultural elite" are not even up to the level of Dark Ages barbarians.  At least the barbarians aspired to standards.
Posted by Borepatch

Labels: Afflicting the comfortable, art, Big Hat No Cattle, elitist bastards, intellectual left, The decline of the Progressive West, the future is stupid, your lyin' eyes

Much to my surprise when my wife dragged my curmudgeon butt to Boston's Museum of Fine Art... I liked it.

I marvel, every time, at the skill it took to carve the Roman and Greek statues. I think of the dedication it took to learn to "read" the stone and make such wonders. I look at the vibrant colors of various cultures' ceramics and think "How many generations of trial and error did it take to develop these"?

I look at the lost wax process, whether in China, or the middle east, or other places around the world and wonder at the creativity that inspired it to arise - in multiple places, or was it communicated, and either way, WOW!

And then I see an article about an "artist" who had his feces canned and sold for megabucks.

They say art and architecture reflects the soul and spirit of a culture, an outward and visible sign of its inner nature. If today's "art community" and its product are anything to by, we're more than ugly.

What kind of force would move artists and sculptors to deliberately attack beauty? Moving up the causal chain from Cultural Marxism, I'd argue its the same force which has convinced people that killing their children is healthcare.

A few months ago in Paris, an artiste sold three pieces for over $125,000 each.
The works were a single banana duct taped to a white wall panel.
The owner was responsible for replacing the banana when its usefulness was past.
A tragedy was narrowly averted when the sponsor of the show replaced the banana after a patron had eaten it.
Someone needs to tell people that the Emperor has no clothes.

My son dragged me into a "museum of modern art" -- there is no such thing as that kind of "art" in my mind. I couldn't get out of the place fast enough. That was over 20 years ago. Nothing has changed.

In my simple mind "art" took a nosedive with a can of tomato soup back in the early 60s. But then I graduated HS in '63, so what did I know.

Thank you for the detail on the Boxer at Rest. It got me to doing some reading.

I think the Golden Madonna looks better at a slight angle, and in different light. She looks less like a cartoonish rendition of Byzantine art that way.

I hate the modern art sections as well. All of it looks like something a five year old could have put together without much effort. Most of the sculptures could easily be mistaken for junk to take to a recycling facility. .

I have seen many marble statues over my lifetime. And have marveled at the intricacy and movement shown, by the masters of craft. What even makes it more impressive is that I have read from various places, that the marble statues were not simply left that way, but they were then painted, to make the robes pop with color, and the faces look alive.
Can you imagine, after seeing just how marvelous the marble statues are in their present state, how much more wondrous they must have been, given the skill of the sculptor, how the skill of the artist who painted them would also have been.
We do have artists today, who have the talent and the ability to make just as impressive art pieces. The trouble is, people will pay thousands of dollars for a banana on a board. But as you have shown, fine art is there for the viewing, you just have to go and find it.