Deriving their just powers from the consent of the governed

The Spanish region of Catalonia held a referendum on whether to secede from Spain.  It appears that the vote would have lost, as perhaps only 40% of the population supported Catalonian independence. Then the Spanish government decided that the vote would not be allowed, at least if they could stop it.  The pictures are extremely ugly: 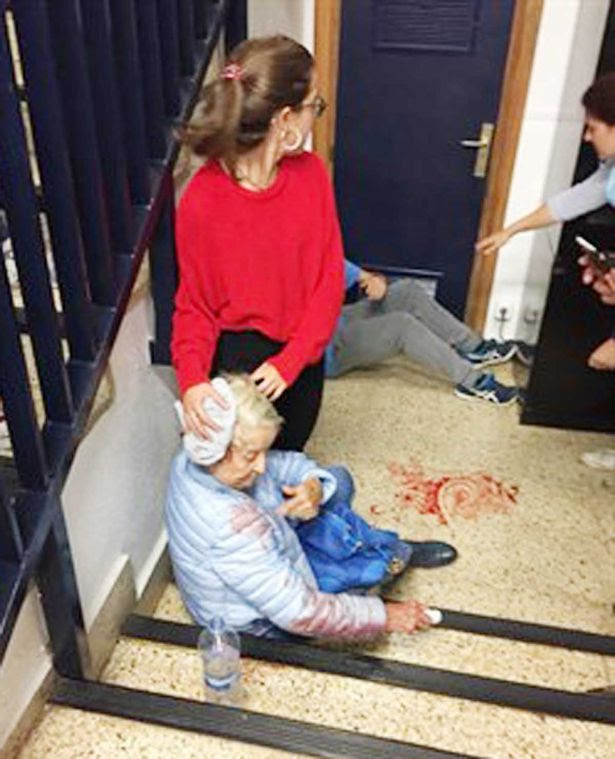 
Catalonia riot police turned on a loyal dog that refused to leave its owner’s side as he was dragged along the ground amid violent scenes outside a polling station today.

Shocking footage of bloodied voters has been coming out of Catalonia throughout the morning with riot police taking to the streets amid a bid to stop the “illegal” independence referendum.

The latest incident, which was filmed by a member of the public, shows armoured cops manhandle crowds of people and even target a dog that refused to run away from his injured owner. 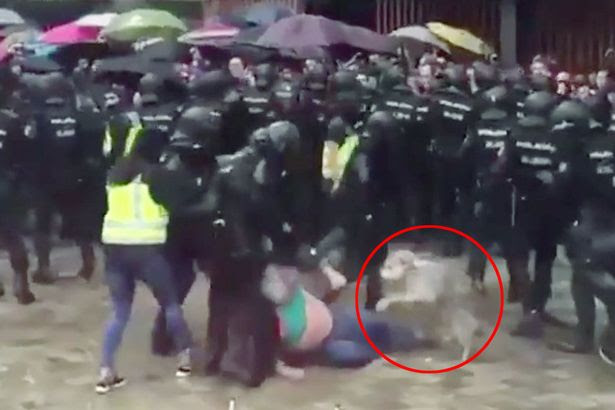 Czech scientist Lubos Motl has a detailed roundup of what's happening.  It appears that the Guardia Civil police have not just beaten hundreds of Catalonians and attacked schools, but have seized the ballots.  The Spanish government says that the referendum is "illegal".  To Motl, it reminds him of the "Velvet Revolution" of 1989:


Julian Assange's Twitter account contains a remarkable collection of the Spanish police brutality – which already exceeds the riot police's violence against the students in Prague in November 1989 – which was enough to ignite the Velvet Revolution – by orders of magnitude.

It's hard to see how the Spanish government can claim any legitimacy in Catalonia after this.  Our own country's credo was penned by Thomas Jefferson in 1776, but has world wide recognition.  In it, the following is the one that comes to mind:


When in the Course of human events, it becomes necessary for one people to dissolve the political bands which have connected them with another, and to assume among the powers of the earth, the separate and equal station to which the Laws of Nature and of Nature's God entitle them, a decent respect to the opinions of mankind requires that they should declare the causes which impel them to the separation.

I'm not sure that Catalonia needs to do that now.  A picture is worth a thousand words:


For you, look this pictures today... pic.twitter.com/RUDm5zWOQa
— mireia (@DegeaMireia) October 1, 2017

And the Spanish government now is faced with answering a later challenge from our credo:


That to secure these rights, Governments are instituted among Men, deriving their just powers from the consent of the governed, That whenever any Form of Government becomes destructive of these ends, it is the Right of the People to alter or to abolish it, and to institute new Government, laying its foundation on such principles and organizing its powers in such form, as to them shall seem most likely to effect their Safety and Happiness.

It seems that the Catalonian independence movement are a bunch of loony socialist EU suck-ups, but Madrid has now made them the only voice of legitimacy in the region.  None of the talk about the legality of the election will make any difference now.
Posted by Borepatch

Matism, the problem here isn't cops, it's bad cops. Some of the examples you reference (Jerry Waller) sure seem to be caused by the guy who got shot being an idiot. Sure, being an idiot shouldn't be a death sentence, but not being an idiot when your life could be on the line seems like something that's in your interest.

There's plenty of government overreach that talk about without bringing out "pigs burning in hell".

ALL governments use violence to maintain the hold that they have over their citizens. See the US, circa 1860-1865.

As to the previous comments on this post, I would rather have a cop next door than one of those BLM or Antifa idiots.

It seems to me the logical position would have been let them vote and it it went bad just ignore the vote.
Now there is no way the citizens will stay. (I would think, maybe its seen as a bunch of idiots).
IT has been handled so badly I have to think there is some internal subterfuge going on.

I sure am glad those good cops who aren't the problem keep removing the "few bad apples" from their ranks. LOL!
And about that "consent of the governed"... what is the age of consent to consent to that?

Kent, have you forgotten the rest of that saying?

Bad cops get to be that way because the rest let them.

Antibubba- Check out what I wrote at the link on that sentence. You might see the sarcasm in my words above. ;)

Stand by. We aren't far from widespread support for such violent actions here in the us of a.