Not once in a century are men permitted to bear such responsibilities for freedom and justice ... 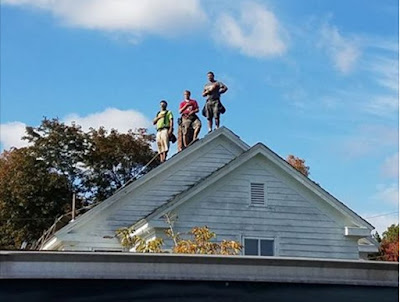 Three roofers in Waterville, Maine stand at attention when the National Anthem is played at a neighboring football field.

The quote, of course, is from Joshua Lawrence Chamberson to the boys of the 20th Maine on Little Round Top at the battle of Gettysburg.  He knew that the battle was to be fought - and won or lost - there on that day.  The stubbornness of those boys has been preserved, at least in Waterville.

Labels: America, Cold Civil War, us vs. them

People should pay attention... THESE are the folks that buy NFL tickets and merchandise...

These "regular folk," these working stiffs, can figure out that you stand for the National Anthem out respect, even during working hours.

Sadly, it's a lesson lost on the pampered brats of the NFL and other games.

Coincidentally, I was reading a series of SF ebooks last week, and the main character's ship was named Joshua Chamberlain.

Stand for the flag, it represents a nation that changes itself to form a more perfect union, something few nations can do, or desire to do.
Thanks for the post.