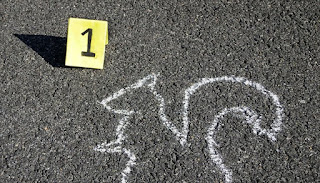 I leave out big dog bowl and a large but shallow plastic Tupperware style container with water in them in the unfenced side yard when it's been a long dry spell for the animals.  The birds love them, and the squirrels and the bunny occasionally are spotted drinking out of them.  They are always in the same spot and she refills them with fresh water every day, nestling them in some foliage where the animals have some safety.

But the other morning, I was out in the yard, the bigger of the two dishes had been MOVED.  It was upright but was completely empty of water and had dirt in it.  It was several feet away from where it usually is.

I figured perhaps a raccoon was messing with it. 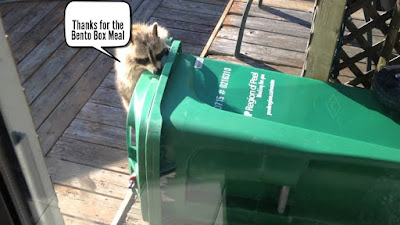 But yesterday Partner in Grime went out in the fenced yard before Abby Lab was let out first thing in the morning to make sure the yard rabbit,  Mr. Bun, wasn't out sunning himself.  Mr. Bun was not out but there were tufts of fur all over the back of the yard. I was worried it was Mr. Bun but Partner said it looked like

Some creature had dismantled a squirrel during the night.  There was nothing left but some blood, a couple tiny bones, a tiny bit of squirrel innards, and lots of clumps of fur.  My better half got that cleaned up and then let the dog out.

We didn't know what could have done it.  The fence slats are too narrow for a coyote or a fox, maybe a small cat could get through but we have NEVER seen a cat in the yard as all the neighborhood cats know Abby is standing guard.  Something had to climb OVER the fence to eat the squirrel or swoop down from the sky and get it in the night. We have a motion sensor light - it would just take the squirrel going into the center of the yard, start singing a song from  "West Side Story" as the stage lit up and well. . . you know the rest of the story. I don't know but given that Halloween is coming up I'm going to have my flashlight when I take the dog out into the yard late at night.

You never know what might be lurking out there. 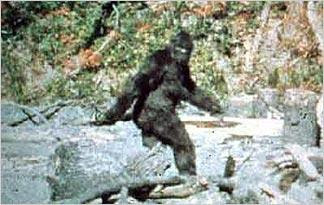 Around here in Arizona, it is not uncommon for coyotes to leap over and laugh at 6-ft high block walls. Cats and small dogs left outside at night often become tasty dinners for Mama Coyote and her nearby pups.

Possibly could have been a raccoon. They are a nasty predator, and I understand that the Chicago coons are bigger and more streetwise than their poor southern IL cousins.