Picture of the day 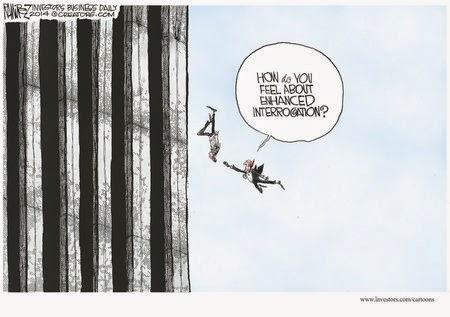 Via Theo.
Posted by Borepatch

Labels: The decline of the Progressive West, us vs. them, war on terror

Sorry, this is an appeal to emotion, and is no different than a cartoon depicting a reporter asking a kid being shot at Sandy Hook how he feels about the Second Amendment.

Torture is ALWAYS wrong, unless you can somehow justify the power of the society over the rights of the individual.

Divemedic, I have absolutely no problem with the fact that we waterboarded Kalid Sheik Mohammed. He sang like a canary about the "next" 9/11.

There's a certain cosmic balance there, even. If that makes me a terrible person, then I'm comfortable with that.

Yep. Right on up until it is YOUR wife or child diving out the window for a quick death rather than burning alive, right DM?

Contrary to moral poseurs torture is used because it works. We have 5000 years of human history to prove it. Torture isn't wrong simply because some idiot thinks it is.

The people responsible for 911 declared war on you that day. They will use torture, they will behead children, they will launch sneak attacks on unarmed civilians and they operate outside the bounds of civility. You don't try to reason with a feral dog - you kill it. Whether you do it with poison, or a rifle or a trap - in the real world some ends do justify the means.

"Yep. Right on up until it is YOUR wife or child diving out the window for a quick death rather than burning alive, right DM?"

So if it is your kid being shot at school, it is OK to ban guns?

What if the government decides to torture you until you give up the location of your newly outlawed assault weapon?

Or, is it OK to ban cameras if some pervert takes pictures of your kid in the nude?

The point is, we have something in the Constitution called "due process" and everyone is entitled to it. Nowhere in the Fifth Amendment does it say that your right to due process is dependent on the severity of the accusations made against you.

"in the real world some ends do justify the means."

Are you serious? Fuzzy thinking maybe? Get a load of the people you are defending:

I suppose liberals and stupid people might think banning guns is a good idea. The same morons would probably excuse the animals that shot up this school out of stupidity as well. Intellectual and moral cripples will defend the animals that did this, but I will not. Hook them up to a car battery by their balls and let them have it! The pissing and moaning of the bedwetters and hand wringers is music to my ears.

Osama bin Laden couldn't have asked for better results. He figured we would over-extend and bankrupt ourselves in wars abroad while decimating liberties and fighting amongst ourselves at home.

Was he wrong? Let's quit his script dammit. He's winning.

Divemedic, Assume it was you on the way to the pavement. Do your children and your country deserve answers? Yes? Or no. Repeat: yes, or no?