Quaternary Studies always fascinated me.  As a child I obsessed about dinosaurs, and from the thunder lizards it's only a half step sideways to Wooly Mammoths and Sabre Tooth Tigers.  The Quaternary Period covers the last 2.5 Million years or so, and I grew up fairly immersed in amateur palaeontology because of it.

That extended to my days at State U, where I would haunt the offices of the Quaternary Studies team.  They not only had a sign over their office with the title of this post, but they had charts showing the temperature over the period.  Charts very much like this: 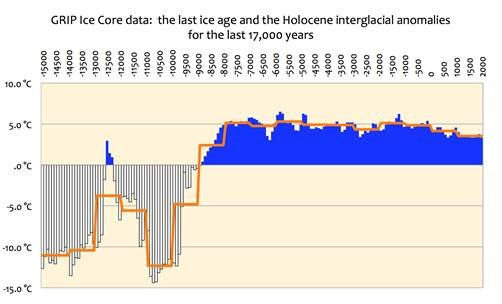 This is ice core data from the Greenland Ice Core Project (GRIP).  Ice cores are similar to tree rings, in that a certain amount of ice is deposited on glaciers each year, and that close examination will show rings (layers).  These layers are a proxy for temperature: colder years will tend to be thicker and warmer ones thinner.

Using this proxy data, you can clearly see the last ice age which ended sometime after 10,000 B.C., and you can see the modern Holocene period (the warm part shown in blue).

You can see that the temperature has been tailing off for most of the Holocene period.  I don't believe that anyone really knows why, but that's just my opinion.

You can clearly see the last four ice ages, with warming periods in between.  The current warming period (the Holocene) seems somewhat less warm than previous ones.  Again, I don't believe that anyone knows why this is.

This was my starting point as a "Climate Change Sceptic"* - it's pretty obvious to anyone with even an 11 year old's casual interest that the climate is massively variable.  The current "we've eliminated all possible causes other than Carbon Dioxide" is pretty unconvincing when you put it next to these charts.  Click through the first link to a very good introduction to long term climate.

* This is the stupidest, most drool-worthy propaganda of the entire ecology movement, and that says a lot.
Posted by Borepatch

Labels: best posts, climate science, history, i am a nerd

All these climate "scientists" never seem to take the long look, and use readily available data that clearly shows how cyclic our climate is.

I was reading one of the "ZOMG..MORE HURRICANES ARE COMING!!!!" articles a while back, and the dim bulb "scientist" admitted he'd only used data from the last 50 years!

I was always taught Science as "If your data doesn't fit your theory, maybe your theory is wrong".

Now days it seems to be "If the data doesn't fit your theory, throw out those data points, and fudge the rest".